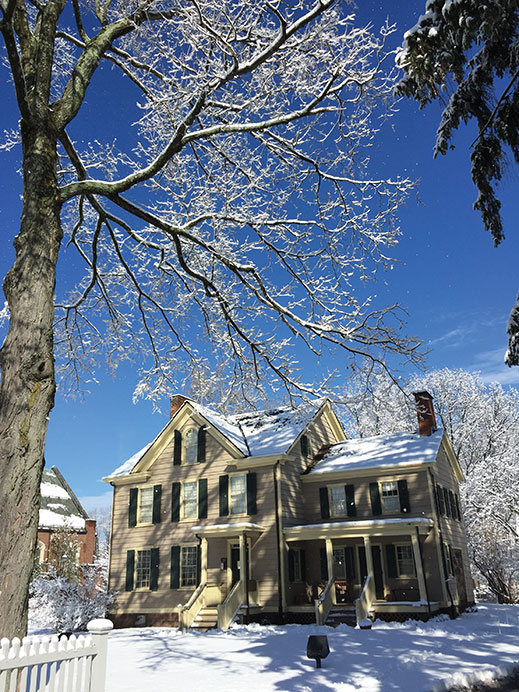 The Grover Cleveland birthplace in Caldwell. Photo by Akiko Tawarada-Axe.

1. Born in Caldwell in 1837, Grover Cleveland is New Jersey’s only homegrown chief executive. His time here was brief. When he was four, Cleveland’s family moved to upstate New York, which would become as his political launching pad. After serving as New York’s governor, Cleveland was elected in 1884 to the first of two non-consecutive terms as president. After his presidency, Cleveland retired to Princeton, where he died in 1908. He is buried in Princeton Cemetery alongside his wife, Frances, and their daughter, Ruth (who some contend is the namesake for the Baby Ruth candy bar).

2. New Jersey did send a governor to the White House, but he was not a Jersey native. Woodrow Wilson was born in 1856 in Staunton, Virginia. He attended the College of New Jersey (now Princeton University). He later taught at Princeton and in 1902 was named university president. He served until 1910, when he was elected New Jersey’s governor. Two years later, he was elected president. Wilson would serve two terms, presiding over the nation during World War I.

3. At least five New Jersey towns and one borough are named for George Washington, who indeed slept here often as commander of the Continental Army. Bergen, Burlington, Gloucester, Morris and Warren counties can all claim Washington Townships; Warren has the lone borough. Mercer County also had a Washington Township until 2008, when voters changed the name to Robbinsville. Jersey towns have been named for at least nine other presidents—a list that, oddly enough, does not include Cleveland or Wilson.

4. Pity poor James A. Garfield. The Ohio native was elected president in 1880, but just six months after his inauguration, an assassin shot Garfield in the back. The president survived the assassination attempt for 11 months. Toward the end, he was transported to the Elberon section of Long Branch in hopes the salt air would add to his recuperative powers. He died there on September 19, 1881, two months shy of his 50th. Garfield was one of seven presidents—from Grant to Wilson—to seek rest and relaxation in Long Branch. Hence, Seven Presidents Oceanfront Park.

5. Philadelphia-born George McClellan attended West Point and was a military superstar, rising to general-in-chief of the Union Army—until President Lincoln fired him during the second year of the Civil War. McClellan’s revenge was to run as a Democrat against Lincoln in the presidential election of 1864. He lost, carrying only three states—including New Jersey. He later served a single term as New Jersey’s governor, from 1878–81. McClellan died in Orange in October 1885 at the age of 58 and was buried at Riverview Cemetery in Trenton.

6. Long Branch native Garret Hobart was once a heartbeat away from the presidency—his own. Hobart, a Republican, served in both houses of the New Jersey Legislature before running for vice president on William McKinley’s ticket in 1896. They won, but Hobart died of heart disease while in office in 1899. He was just 55. Had he lived, Hobart no doubt would have been McKinley’s vice president for a second term—and would have ascended to the presidency in 1901, when McKinley was assassinated. Instead, the job—and the presidency—went to Theodore Roosevelt. Hobart is buried in Cedar Lawn Cemetery in his adopted hometown of Paterson. 7. Aaron Burr narrowly missed the presidency in 1800, when he tied Thomas Jefferson in the Electoral College. That threw the decision to the House of Representatives, which took 36 ballots to choose Jefferson. Under Constitutional rules at the time, Burr, a native of Newark, ended up as Jefferson’s vice president. Any hopes of succeeding Jefferson ended on July 11, 1804, when Burr killed Alexander Hamilton in a duel in Weehawken. That, and his later shenanigans trying to set up an independent nation in the American Southwest, put an end to Burr’s political career. He died in 1836 and was buried in the Princeton Cemetery near his father, Aaron Burr Sr., the founder of the College of New Jersey (now Princeton). 9. California was Richard M. Nixon’s power base, but he spent the final 13 years of his life residing with his wife Pat in Bergen County, first in Saddle River and later in a gated community in neighboring Park Ridge. Nixon, who died in 1994 at the age of 81, was a huge sports fan and in his Jersey years was a frequent presence at Giants football games in the Meadowlands.

10. Although a native of Queens, New York, Donald Trump has strong ties to New Jersey. During the 1980s, he bought or built three Atlantic City casinos. By the time he was running for president, the three casinos had gone through four bankruptcy proceedings and had all been sold or shuttered. Trump’s brand is gone from AC, but it remains on his private golf courses in Bedminster and Colts Neck.