One of eight pink granite lions outside of Newark Penn Station gets washed as the terminal undergoes refurbishments. Photo courtesy of NJ Transit

The terminal has lost some of its luster over the decades and become somewhat separated from its host city by highway and high-rise construction. But plans call for better pedestrian access and for Penn Station to again become a centerpiece, Governor Phil Murphy tells New Jersey Monthly. “It’s a gem, and its renovation and reimagination are way overdue. We start with its great bones and will make this really special,” says Murphy, who has pushed the state-funded project.

The station is one of the busiest in the nation—a hub for NJ Transit trains and buses, the Newark Light Rail, PATH, and Amtrak’s Northeast Corridor trains, as well as car services. Prior to the pandemic, an estimated 42,000 commuters passed through it twice a day—a number that has dipped, but is rebounding, says Kevin Corbett, CEO of NJ Transit, which owns the station. Designed by McKim, Mead & White, architects of the late, lamented old Penn Station in New York, the Newark terminal post-Classical with Art Deco detailing. It is listed on both the state and national historic registers.

From its exterior arches to the soaring waiting room with terrazzo floors, stained glass, and aluminum embellishments, the station was an exuberant symbol of optimism when it opened during the Great Depression. In the early 20th century, “train stations became great secular cathedrals,” says Gabrielle Esperdy, an architecture professor at the New Jersey Institute of Technology and a regular commuter through Penn Station. “It was more than just a place where you went to get a train; it was a gateway. It was: ‘You have now arrived. Here we are, in the heart of the city.’”

The station is wedged between the business district surrounding Market Street and Newark’s Ironbound, a hub for dining and nightlife. But it seems oddly cut off from both. Route 21 (McCarter Highway) hems it in, as do barricades added for security after 9/11. Further, the station is dwarfed by the ’70s-era Gateway Center, to which it is connected via a second-floor covered walkway built into one of the facade’s grand arches. The office complex, designed so commuters could avoid city streets, is now also “reimagining” its space to better integrate with Newark. 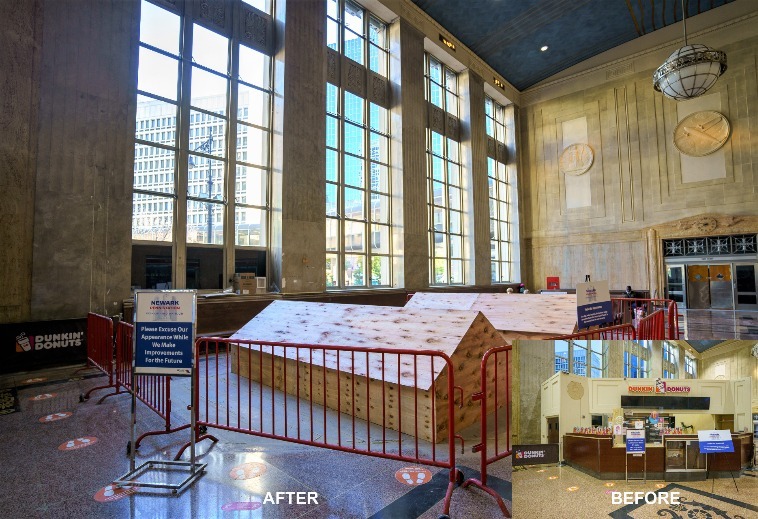 Corbett says special attention will be paid to improving the pedestrian experience at Penn Station—connecting it more organically to downtown and the Ironbound—as well as reconfiguring traffic lanes for ride services.

Initial work has largely been cosmetic. The façade—limestone and pink granite trimmed with aluminum—was cleaned, including the intricate ornamental friezes. Bathroom tiles were replaced, and waiting room benches are being refurbished. The massive 800-pound, opal-glass globes that hang in the waiting room, encircled with white-bronze bands depicting the signs of the zodiac, were cleaned and outfitted with LED lighting. “It’s important for the people of Newark…to have the building last for another 90 years,” says Emily Manz, executive director of the nonprofit Preservation New Jersey. “A lot of us rush through it, but when you stop and look, it really is amazing.”

But a train station is about function, after all, and some commuters say practical improvements are overdue. “They could stand to improve the flow of the train riders and commuters—create a better experience with better signage and high-speed escalators,” says Len Resto, president of the New Jersey Association of Railroad Passengers.

NJ Transit will soon seek public input on the redesign, and bids will be solicited for big-ticket items like mechanical and electrical work, as well as amenities including new bathrooms, a pedestrian plaza and, perhaps, a food court.

Officials are working with local and county agencies to address homelessness and drug use in and around Penn Station as well, Corbett said.

Work is expected to continue through 2025.

Murphy says an infusion of federal infrastructure money may accelerate the project and others involving public transportation around the state. NJ Transit also is refurbishing train stations in Lyndhurst and Perth Amboy.