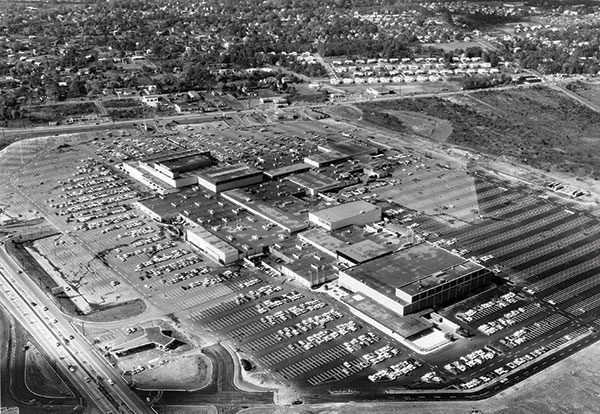 As this 1962 aerial photo showed, the mall sprawled before sprawl was pejorative.

It was 1961 and Fred Moore’s family had just moved from Camden to a development called Cherry Hill Estates. Moore, then a high school junior, needed a job, so he ambled across Route 38, where the new Cherry Hill Shopping Center was being built.

“It was only a few weeks from opening, and it was an amazing place,” says Moore, now 66. The center would soon be known as the Cherry Hill Mall. “The floor tiles were still not in place, and I had to walk on boards over the dirt base,” he says. “What turned out was marvelous in the end, though.”

The Cherry Hill Mall, which turns 50 on October 11, was the first enclosed, air-conditioned shopping center in the Northeast. At about 1 million square feet, it was the largest of its kind in the world when it opened. Now in the midst of a multiyear renovation, it remains a viable retail center. But when it opened, it was a space-age phenomenon.

“I was in a business-education assembly at Woodrow Wilson High School in Camden that day, and the speaker said, ‘Something is happening down the road today that is history making’,” recalls Dan Cirucci, who became the public relations manager for Cherry Hill Township in the 1970s. “I’m thinking, A bunch of shops? But he was right.”

The place had two wings—Penn Mall and Delaware Mall—stretching in an L out of Center Court, which had fountains, staircases and a covered-bridge walkway over a manmade pond in front of the main anchor tenant, the first New Jersey outpost of Philadelphia’s Strawbridge & Clothier department store. In the middle of Penn Mall was a cage of tropical birds from Australia and South America. The place even had a landscape consultant, Lydia Pascault, who tended to 14,000 mostly tropical plants, from 6-foot-tall pygmy date trees to 20-foot Solomon Island ivyarums.

Alan Wechsler thought he was lucky to have a small photo studio in the entry corridor between Strawbridge’s and Merrill Jewelers. “I had moved to the Knollwood development, so I could actually walk there, instead of commuting to Philadelphia,” Wechsler says. “The Mall was successful immediately. Buses would come in from New York and Boston just so people could see it.”

A month after the center opened, the developer, James Rouse, asked Wechsler if he would like to have the Santa Claus photo concession. Strawbridge’s was doing so well that it didn’t want to take away space. Wechsler took it on. “We put it in the Center Court, and we put in our best lighting and a good backdrop.” Wechsler did such good business that first Christmas that Rouse, who opened numerous additional malls, gave him the concessions at his other developments. Wechsler’s Cherry Hill Photo eventually dropped everything but the Santa Claus and Easter Bunny photo concessions, expanding to 350 malls before he sold the business in 2003.

As for Fred Moore, he landed a job in the new mall handling suit-alteration pick-ups for Adams Clothing. He worked there and at Baker Shoes and Chandler Shoes at the mall through high school and college.

In the spring of 1962, when the mall was not yet a year old, Moore went to his Cherry Hill High School junior prom in Center Court of the new shopping center.

“Rhapsody in Blue was the theme of it, and all the guys wore white tux jackets with black pants,” Moore says. “We thought we were the greatest. The mall for a prom. There was nothing better.”
Moore, who recently retired after a career in sales and lives in nearby Mount Laurel, will always have a soft spot for the mall. “It’s still a nice place now, with the new Nordstrom, but in the beginning, wow! It was really special.”