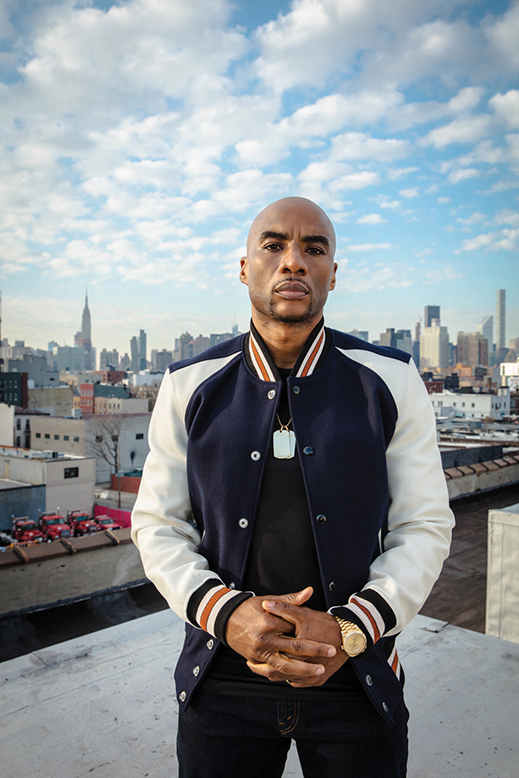 You’ve been called the Howard Stern of hip-hop because of your outspoken personality on The Breakfast Club, the radio show you’ve co-hosted since 2010.

We keep it provocative, and that’s how we’ve become a global sensation.

Where’d you get the name Charlamagne Tha God?

When I was a kid, I used to sell crack. I would call myself Charles or Charlie so no one would recognize me. In night school, I was reading a history book that talked about the emperor Charlemagne. That wasn’t far from Charles. I was also studying the Five-Percent Nation [a black empowerment ideology] at the time and in the Five-Percent Nation, everybody’s a god. So, Charlamagne Tha God.

You’ve come a long way from hustling. You’re 40, with a wife and three daughters. Your friends include Kanye West, who chose to talk to you publicly last year about his mental health struggles.

I’m glad we’ve opened up the conversation about mental health. Everybody’s feeling the same thing, but nobody wants to talk about it.

In your latest book, Shook One, you talk about how hard it is for black patients to find psychotherapists of their race. In fact, your therapist is a white woman. How’s that going?

I originally wanted an Asian woman therapist, someone who didn’t have any of the same prejudices I had and was neutral, who could tell me whether I was bugging or not. But I found a Caucasian woman to talk to this past year, and she’s been great.

What made you decide to live in New Jersey?

I got my first real break with Wendy Williams, who was syndicated in Columbia, South Carolina, where I was a host at 103.9 FM in the early 2000s. She and her husband would come down and kick it with us sometimes. In 2005, when she was ready to transition to TV, she offered me a job in New York as a cohost on her show. They gave me a place to stay in Fort Lee.

After Fort Lee, you moved your family to upscale Teaneck.

I used to live in an all-Jewish neighborhood in Teaneck and it was great. There were dope kosher restaurants, and it was mad quiet on the weekends.

But there was an unfortunate incident with a neighbor there.

My friend Wax pulled up in a new Mercedes in broad daylight, and my neighbor got suspicious and called the cops…. They ended up taking Wax to jail for unpaid parking tickets. I was just like, that’s so racist.

You’ve since left Teaneck. Do you worry about your young daughters experiencing similar scenes?

My [oldest] daughter is the only black girl in her fifth-grade class. I’d like her to be around more diversity. But a lot of times when things happen, you don’t know whether it’s because of the color of your skin or circumstances.

What do you do for fun?

For me it’s staying home. I cannot wait to get home. When you’re young, you’re in the house and you’ve got nothing to do, and you’ve got to get out. You walk around Walmart for no reason, or you go hang out at McDonald’s. When you’re older, all you want to do is be at home.