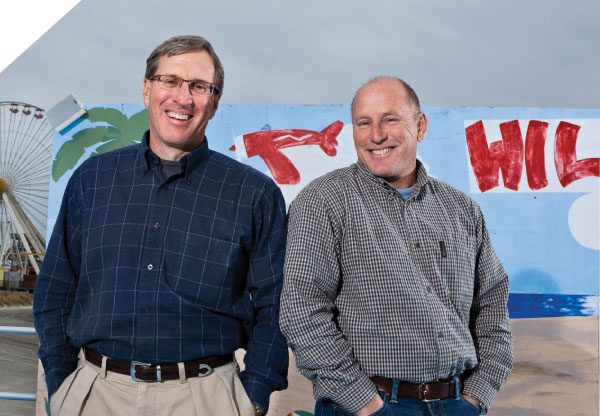 Jack Morey can hardly stop enthusing about the new sign at the Boardwalk terminus of Rio Grande Avenue. In 1950s-stylized letters, two-stories high, it reads, “Wildwoods” and in its foreground are a dozen brightly colored beachballs.

Jack, 47, and his brother Will, 51, fight for a lot in the Wildwoods, but then they ought to, because their businesses are the face of the island. They run the boardwalk’s two amusement piers and water parks. They own a half-dozen hotels and various buildings that house restaurants and entertainment venues. They serve on just about every civic and charitable board in the area, and Jack, the more vocal of the two, is the spearhead of the Doo Wop Preservation League, which seeks to preserve the architecture and spirit of the mid-twentieth century. Indeed, the Wildwoods claim to have the world’s largest cache of 1950s and 1960s motels and hotels.

“The Moreys have done more than anyone to aid the rebirth of Wildwood,” says Diane F. Weiland, director of the Cape May County department of tourism.  “They have made huge investments in the community. They do the most advertising. They help other businesses expand and are the biggest employers, especially in the summertime.  They are, in effect, the drivers of Wildwood, and, thus, the county.”

The Moreys started out as reluctant businessmen. Their father and uncle, who  both grew up in Wildwood, moved to Florida in the 1940s, but decided to build Florida-type motels, one a year or so, back in Wildwood as summer ventures. They brought rides to a couple of amusement piers and moved back to run them.

By the late 1970s, when Will and Jack were reaching adulthood, the motels and amusement piers were getting a little ragged around the edges. The two intended to just be developers, but instead decided to take over and modernize. They built bigger roller coasters and upgraded the motels. As the economy got better in the 1980s and more people headed to the Shore for vacations, the Moreys thrived.

As profits grew, the brothers considered moving on. They started water parks in Utah and California and developments in Florida, but the siren call of Wildwood always brought them back. “Our management style is hands on, so we weren’t successful in managing far and wide,” says Will. “We decided that we were staying in this city, so, selfishly or not, we decided we had better take care of this city.”

The Moreys are cutting back a bit on capital spending but remain optimistic about the coming summer, despite the economy. “We think, as a family resort, where people always seem to come back for a week, we’re positioned to do okay,” says Jack.

Will says he has considered a run for freeholder, mostly because he feels there is not enough coordination among the Shore towns to promote each other nationally and, ultimately, internationally. The Moreys employ as many as 800 young foreign nationals every summer, which gives them a unique perspective. “We look forward to branding the Jersey Shore all around the world,” Will says. “If we can do that, then we can say we really have served our community.”

Click here to leave a comment
There are no photos with those IDs or post 51519 does not have any attached images!
Read more Jersey Celebrities, Jersey Living articles.