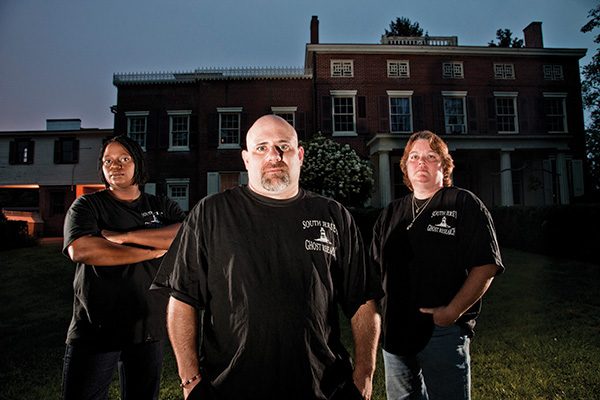 “If I run out of here screaming it’s just because of the bat,” assures Maureen Carroll, a member of the South Jersey Ghost Research team, as the creature darts between barn eaves. “I’ll take the undead over bats any day.”

Carroll, a 42-year-old antiques dealer, and seven other team members are casing the Smithville Mansion, a circa-1850 Federal manor in Eastampton, for the best places to set up motion sensors and other equipment. The estate has always proved ripe for paranormal activity, and tonight I’m along for the ride.

The 250-acre Smithville compound (which functions as a park and museum) couldn’t be more perfect for ghost hunting. First, there’s its dynamic and sometimes soap-opera-like history. Originally a sawmill, then a manufacturing center and industrial village, the property dates to 1676. Its most prominent owner was Hezekiah Bradley Smith, an inventor and congressman who bought the property in 1865 for its prime location between Philadelphia and New York. Smith was gossiped about because he had two wives—one whom he tried to divorce back in Vermont, where he grew up, and one in New Jersey—and his bigamy led to newspaper stories, a failed second-term run, and altercations with his three children from his first wife.

But even without knowing Smithville’s colorful history, the place is downright spooky. From weathered workers’ homes to an old schoolhouse and the mansion itself outfitted in period décor, it seems eerie even in daylight. Here on the second floor of the barn, the space looks more like an attic that could be the backdrop in any scary movie, with high ceilings, a single window, strange artifacts, and furniture covered in sheets. The bats fit right in.

This is the umpteenth time the team has come here to pursue the paranormal. If you think the folks who tiptoe through creaky buildings on the Syfy channel’s Ghost Hunters (or any of its copycat shows) are fringe organizations, think again. Besides South Jersey Ghost Research (SJGR), there are at least ten other formalized ghost-hunting groups in New Jersey. Nationwide, there are hundreds. But with roots that reach as far back as 1955, the SJGR team has been chasing bumps in the night decades before it was trendy to do so. The group’s affiliation with the well-known Atlantic Paranormal Society (Ghost Hunters’ organization), plus its television appearances and robust membership, have made it the ­area’s preeminent paranormal investigative unit—and many a spooked homeowner’s answer to “Who ya gonna call?”

As the team prepares for lights out, Carroll pulls out gadgets and gives me a primer on the tools of the trade. If you’ve caught one of those ghost-hunting shows, you’ve likely seen this stuff. First, there are the electromagnetic field (EMF) detectors. About the size and shape of TV remotes, the devices detect fluctuations in electromagnetic energy through numbers on a screen, noise, lights, or all three. Readings between 2.0 and 7.0 milligauss are the ones to note. (Above 7.0 can usually be attributed to an ambient source—a light, an appliance, hidden wiring.) Digital cameras go hand-in-hand with the EMF detectors; whenever there’s a spike in the numbers, investigators start snapping, calling out “Flash!” before each shutter click so as not to overexpose photos or blind anyone using night-vision tools. If the photos turn up orbs (small balls of light), mists, or other anomalies, that could be evidence of a spirit.

Other tools include red-light flashlights (the red is also to protect night-vision tools) and a thermal imaging camera, which scans for fluctuations in temperature; sudden or unexplainable changes can indicate a possible entity. The team also uses motion detectors in hallways and other areas. Finally, members carry digital recorders to capture electronic voice phenomena (EVP). They’ll turn on the recorders and politely pose questions. When played back, the tapes sometimes turn up a ghostly reply.

We split into two groups and set out to investigate different sections of the property. My team started in the mansion’s adjacent schoolhouse. Village residents sent their children here, as did some families in the surrounding farms. Today, the bottom floor is filled with exhibits and poster boards about Hezekiah Smith and Smith Machine Co. for guests on the tour to peruse. Amongst Smith’s greatest inventions are the steam-driven vehicle and various mechanical woodworking machinery. We pointed our flashlights around the room, illuminating a Star bicycle manufactured by Smith Machine Co. and other artifacts. We waited for jumps in our EMF detectors. There was nothing.

As we climbed the stairs, someone mentioned that investigators often feel ill in the schoolhouse and they’ve come to suspect that during a pneumonia outbreak in the village, the schoolhouse was where the sick were quarantined. When we reached the landing, one investigator called out “I’ve got 2.0…3.0!” setting off a barrage of camera flashes, though the spike quickly disappeared. Jenn Storicks, our team leader, decided to make an EVP attempt. “We aren’t here to make you leave. Can you tell us your name?” Pause. “Do you know what year it is?” Pause. “Can you tell us who the president is?” Pause. “Thank you for talking with us.”

So far, I was unimpressed. Plus, listening to seemingly mentally stable adults ask questions to thin air and wait for replies can be pretty funny. As we left the schoolhouse and headed back to the mansion, our EMF detectors leapt into double-digits. Strange, but probably the result of natural causes, said Carroll. Still, we took a few pictures and did another quick EVP attempt before moving. I never would have expected what happened when they played back that tape.

Every Friday and Saturday SJGR members are out investigating private homes throughout the state and into New York, Delaware, Pennsylvania, and even Maryland. Perhaps because of shows like Ghost Hunters, they are busier than ever. “I do think the shows make us more credible, or at least more mainstream,” says Marti Haines, one of SJGR’s assistant directors, who works as a medium. (Several SJGR members claim to be psychically sensitive.) In fact, members are getting fewer crazy stares and more genuine interest when they tell friends and coworkers this is what they do in their spare time.

SJGR members are teachers, cops, homemakers, husbands and wives, fathers and sons, men and women from their 20s to late 60s, brought together by profound personal experiences with the paranormal and the desire to know more. Inundated with e-mails from freaked-out homeowners—missives that usually start with “You’re going to think I’m crazy but…”—the group is booked solid. Their services are free.

“There’s sometimes a ‘For Sale’ sign on the lawn when we get there,” says Dave Juliano, the club’s director. Juliano has published several books, consulted on ghost movies, and been interviewed about ghosts more times than he can count. His interest in the paranormal began when he was a kid growing up in Magnolia in a house that he says was haunted. Once a cop, Juliano, 42, makes his living running the Ghost Hunter Store in downtown Mount Holly, where he sells ghost-hunting equipment to investigators locally and across the globe.

As we reentered the mansion, my team was greeted by some of the Friends of the Mansion at Smithville (FOMAS), who fundraise and maintain the place—and don’t mind opening it up so SJGR can poke around. FOMAS president Jim Denworth is a blood relative of Hezekiah Smith on his mother’s side.

“Catch any ghosts on your spook-o-meter?” asked Bill Stepler, FOMAS treasurer. Stepler himself has had quite a few strange experiences in the mansion—things disappearing, weird smells, sudden temperature changes. “It gets absolutely freezing when Larry plays the pipe organ upstairs,” he says as his eyes goes wide. “It’s unbelievable.”

On the second-floor, we happened upon the other team in Hezekiah Smith’s bedroom. They were silent and still and serious. Juliano sat near the head of the four-poster bed, his EMF detector above him. On the thermal imaging camera, Haines chased a cold spot near Juliano’s feet. Across the room, Rosalyn Bown, one of the assistant directors—who was recently a contestant on Ghost Hunters Academy, a reality show competition to join the Ghost Hunters team—called out “Flash!” as she took digital photos. “An orb right above your head, Dave,” she said. “Flash!…And another one.” Juliano spoke in a calm, reassuring tone: “We aren’t here to hurt you. We’d like to communicate with you. This meter has a field around it and if you touch this sensor, we’ll be able to know you’re here.” He touched the sensor to demonstrate and the meter lit up and made a static sound. “That was me,” he announced to the rest of us. A few seconds later, he stuck the meter above his head, near where Bown had snapped an orb. For a blink-and-you’ll-miss-it second, the machine crackled to life. “That,” said Juliano, “was not me.”

Witnessing the action firsthand was like watching a horror movie minus the soundtrack—without the music and effects it’s nowhere near as scary. SJGR doesn’t mind skeptics. In post-­investigation analysis the members look for a more logical explanation before deeming any happenings anomalous. Training for new members teaches how to spot false positives. They are quick to admit that singular bits of evidence (especially orbs, which also occur naturally because of dust, humidity, etc.) are no proof of haunting.

Layered evidence—orbs plus EMF readings plus EVPs—is key. In addition to their investigations, members give lectures at libraries and elsewhere to educate the public, and they fundraise for historic sites like the Smithville Mansion.

“At the lectures, we always get someone who tells us we’re nuts,” says Juliano. “The scientific types start asking how we’re calibrating our equipment. But we’re not out to convince anyone, and the truth is we can’t absolutely confirm anything.”

So why do it? “I saw my first ghost when I was three,” says Juliano, who claims he’s heard voices and seen objects move, apparitions, and more. “I spent the next 15 years terrified of living in my house, with no one to talk to about it. We want to help other people understand, because usually, they think they’re being attacked. We teach them how to inject positive energy into a home with sunlight, feng shui, by simply acknowledging the spirit, etc.” Rarely are spirits malevolent, he says, and SJGR never asks a ghost to leave. By the way, Juliano doesn’t mind the Ghostbuster jokes. “You just start to embrace that,” he laughs.

As I put my field notes together, I waited to hear from Carroll if the team had come across any post-analysis evidence. There were plenty of orb photos, to be sure. But then she sent me some interesting snippets from our EVP attempts. Most were fuzzy or quiet noises, barely audible, that could have been absolutely anything. Then I played the clip from our walk back into the mansion, when we were trying to debunk our double-digit EMF readings. “Could be an electrical power source,” you hear Carroll say into the recorder.

And though I still think what came next could have been anything, the evidence is hard to deny. I played the track for a few coworkers who agreed, separately from one another, on what they heard—a soft but clear voice whispering, “Watch out.”

Go on your own ghost hunt: On November 6, SJGR and FOMAS unite for Spirits and Spirits, a night of wine tastings, ghost-hunting lessons and a real investigation. 6 pm to 10 pm; $25 per person. Historic Smithville Mansion, 803 Smithville Road, Eastampton, 856-778-8052, smithvillemansion.org.