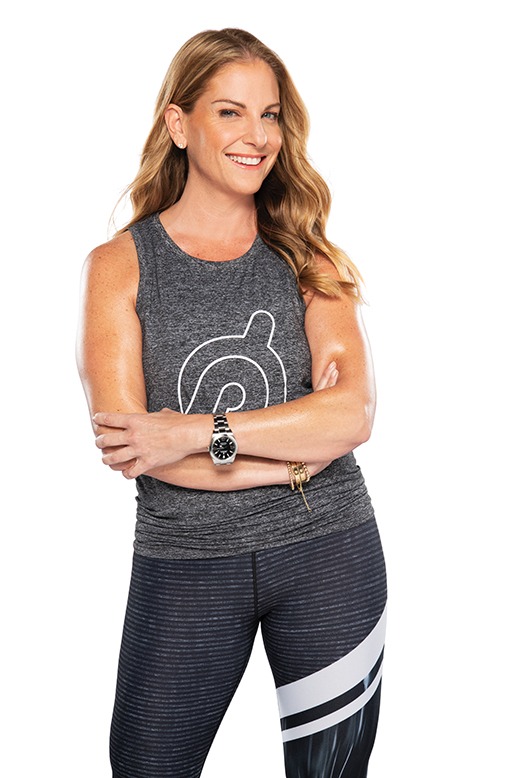 Jenn Sherman is quick to tell you she’s the oldest Peloton instructor. And at 51, that’s true. But what’s more relevant is that she was the first Peloton instructor. Peloton hired Sherman in May 2013, when the at-home fitness giant was a startup struggling for funding and operating out of a Manhattan studio that employees affectionately called “the closet.” Peloton went public in October 2019 and now has more than 2.6 million members using its streamed bike and treadmill workouts and digital app.

Sherman, who grew up in Fort Lee and describes herself as “a proud, born-and-bred Jersey girl,” began spinning in her late-30s at a Bergen County studio after her children, Evan and Carly, now 20 and 17, started school. Spinning swept her up like no step or aerobics class had before. “I was hooked from day one,” she says. “I loved the playlists, I loved the sweat, I loved what it felt like to be side by side with other people riding to the rhythm of the music.” A year later, she became a certified instructor and quickly earned a following.

At Peloton, Sherman has become known for her love of music. Her My Mix Tape rides, and rides devoted to favorites like Bruce Springsteen and Billy Joel, are instant classics. She also leads a Sunday-morning Football Pregame Ride during the NFL season, in which she dissects lineups and matchups.

Sherman fields hundreds of messages from members of the Peloton community who have been helped and inspired by her classes. The importance of that community was never more evident than during the Covid-19 shutdown, when Sherman and her fellow instructors live-streamed classes from their homes rather than Peloton’s new Manhattan studio. (Instructors have since returned to the studios to teach and film classes, though the facility remains closed to the public.)

“People couldn’t go to the gym,” says Sherman, “but they could get on the bike with their community, their friends, and escape.”

[RELATED: This Holmdel Teen is a Nationally Ranked Golfer]