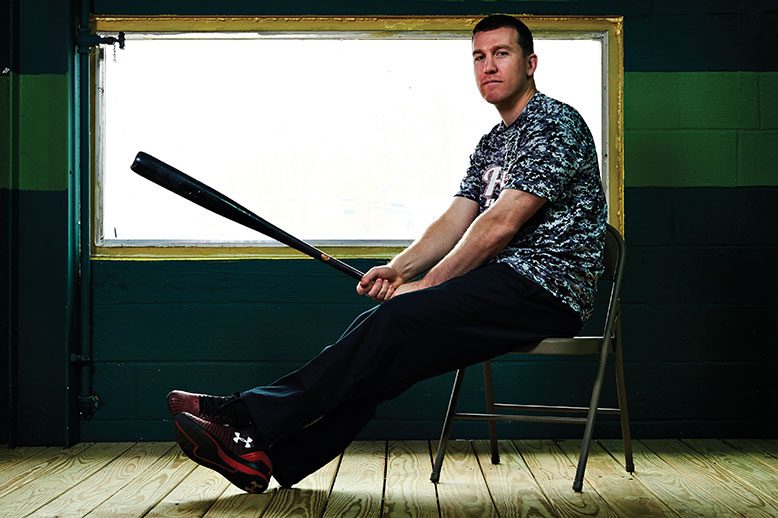 Todd Frazier became a star in Cincinnati, but he never strays far from his Jersey roots. In February, he participated in a baseball clinic for kids in Englishtown.
Photo by Jennifer Pottheiser

Whenever Todd Frazier, the two-time All-Star third baseman from Toms River, strides up to bat at his home stadium, fans are treated to the songs of a fellow Jersey native, Frank Sinatra. Frazier, one of big-league baseball’s most fearsome sluggers, is changing teams this spring from the Cincinnati Reds to the Chicago White Sox, but that won’t change his walk-up music. He’ll stick with a selection of Sinatra hits, although “Chicago (That Toddlin’ Town)” is likely to knock past choices such as “Fly Me to the Moon” and “The Best Is Yet to Come” out of the everyday lineup.

“It is who I am,” says Frazier of his Jersey heritage. “I bleed it.”

Some 18 years after he powered a team from Toms River to the Little League World Series championship, and almost nine years after he was the Reds’ first-round selection in baseball’s amateur draft following three seasons at Rutgers, Frazier is embarking on a new chapter of his baseball life. It started when his cell phone rang at his Toms River home early on December 16.

Frazier didn’t answer right away, but he could see who was calling: Walt Jocketty, the Reds’ president of baseball operations. “I knew something had happened,” Frazier recalls. Finally, Frazier took the call and Jocketty informed him he had been traded to the White Sox. “We talked literally for about 20 seconds, and that was it,” says Frazier. “Life changed.”

Frazier had been a fixture in the Reds’ lineup since 2011. In his last two seasons with Cincinnati, he hit 64 home runs and drove in 170 runs. Last July, the 2015 All-Star Game was played at Great American Ball Park in Cincinnati, and Frazier delighted his hometown crowd by winning the annual Home Run Derby competition the night before the game.

But the Reds lost 98 games and finished last in the Central Division of the National League last season. The media buzzed with speculation that Frazier would be traded as part of a restructuring of the team.

Still, the trade came as a shock. Frazier, 30, and his wife, Jackie, a Freehold native and former Rutgers gymnast, had bought a home near Cincinnati, in suburban northern Kentucky. They enjoyed living there and had made lots of friends. Jackie was just days from delivering the couple’s second child when she and Todd learned of the trade.

“He was not happy with it,” says Charlie Frazier Sr., Todd’s father, “He had developed a home there, bought a house. The city embraced him so well…. Every game, he is out there signing autographs, and a lot of players don’t do that.”

Todd Frazier hails from a baseball family. Charlie Sr. and his wife, Joan, were honored nationally in 2015 as Little League Parents of the Year. Todd’s two older brothers, Charlie Jr. and Jeff, also played professionally. The family loves baseball, but they know it is a business.

Todd played for five different minor league teams in the Cincinnati organization between 2007 and 2012. After the phone call from Jocketty, Jackie’s first comment was, “Here we go again.”

In fact, it was a first for Frazier; he had never been traded from one organization to another.

“It was a rude awakening,” says Charlie Jr. “We all had our Cincinnati gear. Our whole family was Cincinnati—for life. But it is part of the business when something like that happens. The first day we were all overwhelmed with all the phone calls and that kind of stuff. But then you start looking back at it, and you start looking at the [Chicago] team, and the team wants to win. We are pretty excited.”

Frazier is not just changing teams, he’s also changing from the National to the American League. Thanks in part to interleague play, his New Jersey family and fans will still have plenty of opportunities to see him play in nearby cities in 2016. The White Sox schedule includes four games in Baltimore in April and May, six games in New York in May and June (three at Yankee Stadium and three against the Mets at Citi Field), four games in Boston in June, and two games in Philadelphia in September.

Despite playing in the heartland, Todd Frazier has never strayed far from Ocean County. He and Jackie typically pass the off-season at their place in Toms River. Todd likes spending time with his parents and his brothers: Charlie Jr., 35, a former outfielder who played in 458 minor-league games between 1999 and 2004 and is a physical-education teacher at Toms River High School North; and Jeff, 33, also an outfielder, who played in nine big-league games for the Detroit Tigers in 2010 and is a phys-ed teacher at Toms River High School South, the brothers’ alma mater.

The three brothers ran some baseball clinics together in the off-season, including a United States Amateur Baseball camp in Englishtown in February. “I don’t get to see them much during the season,” says Todd. “We try to have as many family functions as possible. You get some downtime, you want to be on the couch and play with your kids, have a pizza and maybe some root beers.”

His father and two brothers say that after Todd recovered from the jolt of being traded, he was reinvigorated by the idea of change. “He got a different strength trainer,” says Jeff. “He looks a lot bigger.” The brothers helped Todd do his homework about his new league and the different pitchers he will have to face. “He’s taking it well,” says Jeff, adding with a wink, “I played a game in Chicago myself. I thought it was a great place to hit. A little cold. Let’s hope the wind is blowing out.”

Because he can belt a baseball, hitting 43 doubles to go with his 35 homers last year, Frazier was often Cincinnati’s clean-up hitter, but he is projected as the White Sox’s fifth batter in the order, behind Jose Abreu, a 255-pound slugger from Cuba who clubbed 66 homers in the last two seasons combined. At the very least, Frazier’s presence will give Abreu better pitches to hit, because opponents won’t want to pitch around him.

Frazier has always been a slugger. He slammed a lead-off home run against a team from Kashima, Japan, in the 1998 Little League championship game in South Williamsport, Pennsylvania. After leading the team to two straight state championships in his sophomore and junior years, he batted .521 as a senior at Toms River High School South. He hit 22 home runs in his last year at Rutgers in 2007.

And now, it’s on to Chicago. “Baseball-wise, it’s fine,” says Frazier. “I’m not worried about that. But just thinking about where your family is going to be—a nice area, a nice place—that’s basically the toughest part.”

The Frazier family, which now includes 2-year-old son Blake and 4-month-old daughter Kylie, has leased a house in Chicago for the season. At the end of January, Todd went to Chicago to participate in SoxFest, an annual promotional event for the White Sox, and enjoyed meeting new fans and teammates.

His contract calls for him to earn $7.5 million this year. He can be a free agent before the 2018 season. If he plays well for the White Sox, he could land an enormous, multiyear deal—perhaps as much as $150 million for six years—with the Sox or another team. Meaning he could be on the move again. Wherever he goes, the Sinatra songs are sure to follow.