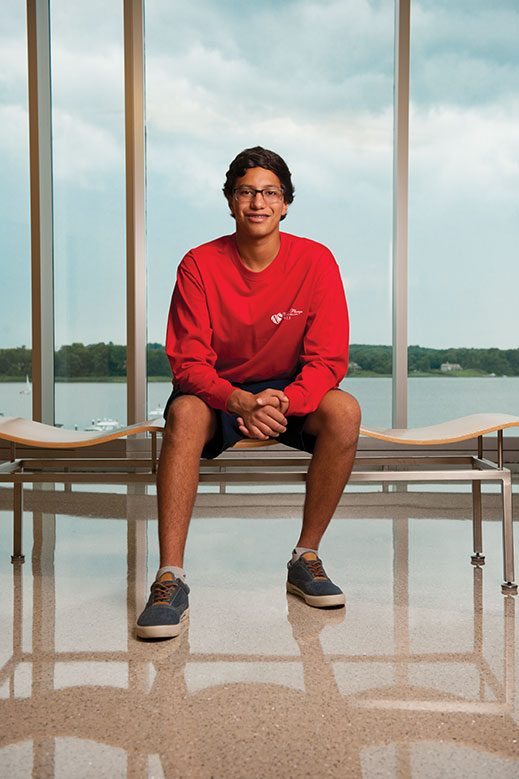 Norberto “Berto” Rivera was only nine when he came face-to-face with amyotrophic lateral sclerosis (ALS), the crippling nerve condition also known as Lou Gehrig’s disease. Several family friends were suffering from the dreaded ailment; Rivera wanted to take action. One year later, in 2008, Rivera took a plunge into the frigid Atlantic Ocean on Valentine’s Day to help raise money for the Joan Dancy and PALS Foundation, a nonprofit that seeks to improve the quality of life for ALS patients and their families.

Rivera, now 18, has dedicated much of his time since to the foundation. This year, he raised $4,940 for the Valentine Plunge—the most by any volunteer under 18. In 2013, he raised $3,800 for the plunge, and more than $3,000 for the foundation at the annual town-wide yard sale in his hometown of Point Pleasant.

Rivera has long dealt with adversity. Orphaned when he was seven months old, he was shuffled among distant relatives until a family friend, Judy Maher, entered his life. Maher adopted young Rivera and taught him much about sacrifice and generosity.

Today, Rivera is the youngest member of the Plunge committee board. He participates in Saturday-afternoon meetings—when many of his peers are likely playing ball or hanging out with friends. But that doesn’t bother Rivera, who just entered his freshman year at Seton Hall University. “I know so many people who have this disease,” he says. “I just want to be able to help them.”

Sean Magovern, president and CEO of the foundation, describes Rivera as someone who goes “above and beyond.” Case in point: Rivera spent six weeks this summer in an intense Education Opportunity Program to get a jump on his classes—and to free up time this fall for the foundation. He is planning to post flyers for the foundation and get the word out among his fellow students; he already has talked to the school about setting up a campus group.

The foundation satisfies Rivera’s drive to make a difference. “I like how we’re able to give to people right away,” he says, “rather than going through a hospital.” Adds Maher, “I can see this being a part of his adult life as well. I’m one blessed and proud mother.”

Charles Morris, a family friend, describes Rivera as an “exceptional” young man. “It is my greatest hope that my own nephews and his peers follow the example Berto has shown to them and countless others in our community.”

Click here to leave a comment
There are no photos with those IDs or post 115133 does not have any attached images!
Read more Giving Back, Jersey Celebrities, Jersey Living articles.