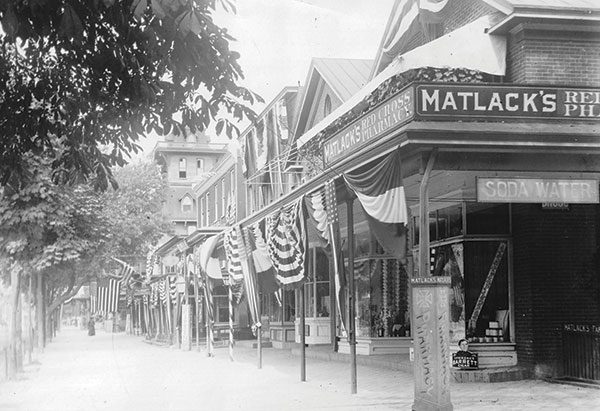 Downtown Vineland.
Courtesy of the Vineland Historical and Antiquarian Society.

“Ladies and gentlemen of Vineland, it gives me great pleasure to visit your thriving town…. It is one of the greatest places for industry and prosperity and intelligence.” —President Ulysses S. Grant upon visiting Vineland in 1874

At the age of 28, Philadelphia native Charles K. Landis took a $500 gift from his mother, bought 20,000 acres in South Jersey, and, on August 8, 1861, founded the town of Vineland. It was Landis’s hope that Vineland—with its fertile soil and centralized location between Atlantic City and Philadelphia—would evolve into an epicenter for the country’s greatest thinkers, writers, spiritualists and entrepreneurs, as well as farmers and grape growers (hence the name).

“This place was not just some little Podunk town,” says Lois Genovese, a trustee of the Vineland Historical and Antiquarian Society. “It started off as a progressive, utopian community.”

It’s been 150 years since Landis’s dream took root in what he called “the wildest part of New Jersey.” This month, Vineland (population: 59,249) will celebrate its sesquicentennial in style, with an August 7 parade, fireworks display, barbeque and carnival. And while one would be hard-pressed to call it utopia, the Cumberland County municipality does maintain a great deal of its original agrarian character and frontier spirit, with sprawling farms bordering its modest downtown. Here are a few historic highlights from one of South Jersey’s oldest and most ambitious towns. ■

•  Dr. Thomas Welch, a dentist, started Welch’s Grape Juice here in 1869; it was originally called the Vineland Grape Juice Company. Vineland was a dry town, but Welch wanted to provide “unfermented wine” to his church congregation during communion. The Welch’s operation is no longer in town, but Dr. Welch is buried at Siloam Cemetery in Vineland—which also is Charles Landis’s final resting place.

• Vineland was the first place in the nation where women voted in a presidential election (even though the country didn’t recognize the results). In 1869, a local suffragist named Sarah Pearson distributed a handbill that urged women to cast symbolic ballots. “Men will concede your right of suffrage when convinced that you earnestly desire it,” she wrote.

•  Founded in Vineland in 1958 by Richard Conner, Rennoc Corporation (now defunct) was once the world’s largest manufacturer of fabric Christmas decorations, an operation that began in Conner’s basement.

•  Miles Lerman, founder of the United States Holocaust Memorial Museum in Washington, D.C., was a Polish-born poultry farmer who settled in Vineland after surviving the Holocaust. Lerman raised more than $190 million to get the memorial project off the ground. He is buried in Vineland’s Alliance Cemetery.

• At 69.3 square miles, Vineland is the largest municipality in the state. In the late 19th and early 20th centuries, it was designated by the legislature as New Jersey’s backup capital.

•  Through the late 19th and early 20th centuries, Vineland had a bustling clothing and textile industry. By 1900, there were eight different button manufacturers in town.

•  With a surrounding field of 3,360 solar panels, Vineland’s RFC Container Corporation in March became the first factory in the United States to supply all of its own power, generating about 1.5 million kilowatts per year.

•  While there are no large egg operations to speak of today, Vineland was once home to the largest egg auction in the country. In the 1950s, almost a million eggs a day moved through the Vineland Egg Auction on Delsea Drive, where, ironically, there now stands a Popeye’s Chicken.