The view north on the tiny beach at Popamora Point. On a clear day you can see Manhattan, but it’s unlikely you’ll see a crowd at this hidden strand. Photo by Ken Schlager

Let’s face it: You can’t really hide a beach at the Jersey Shore. Veteran beachgoers know every sandy nook and cranny. But if you want to steer clear of the busiest beaches, we have a few ideas for you. Just promise not to tell.

A mere 1,600 feet long, this half-moon beach on Sandy Hook Bay affords privacy and surprisingly good amenities. Located at the western end of Shore Drive in the seaside hamlet of Highlands, Popamora Point is free and rarely crowded. The beach has free parking in a lot and along the approach road. There’s even a park house with clean restrooms and outdoor showers. The dog-friendly and kid-friendly (no waves) beach provides a distant view of Manhattan and the Verrazzano-Narrows Bridge. On the downside, broken shells pepper the sand, and the bay floor is rocky. Water shoes are suggested. Feel like a little exercise? The beach sits right off the Henry Hudson Trail, a well-maintained biking, walking and running path that links to Atlantic Highlands, two miles to the north.

There are no concessions at Popamora Point, but you can brown-bag it at the shaded picnic tables near the park house. Or head a few blocks into downtown Highlands for paninis and smoothies at the Water Witch Cafe & Fresh Market, or blueberry pancakes at Girl’s Café. In town, you can rent bikes at Kranky’s Cycles or pick up fresh produce (Saturdays only) at the farmers’ market. —Ken Schlager 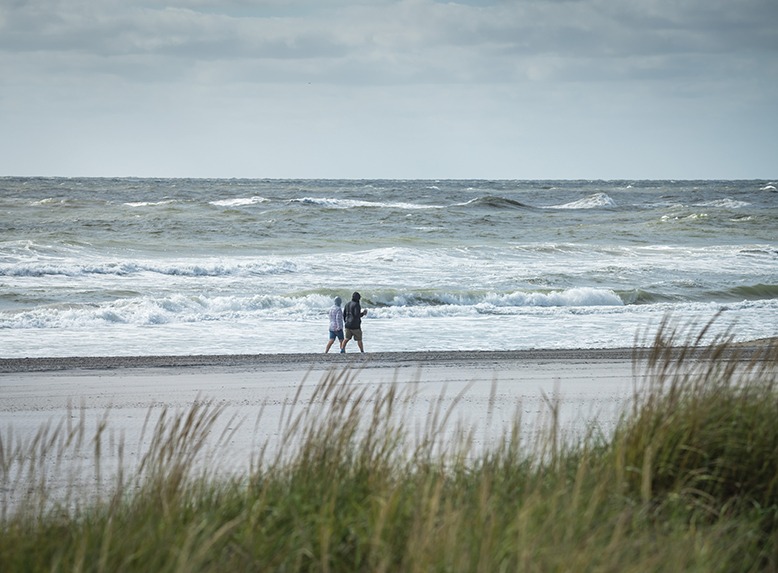 You can’t reach Brigantine by car without skirting the edges of lively Atlantic City. The casino town fades in the rearview mirror as you cross the Brigantine Bridge over Absecon Inlet and enter this slower-paced and somewhat secluded island city—a haven for recreation, shopping, sightseeing or just relaxing on the beach. At the south end, two 4X4 beach areas, the Cove and the Jetty, attract surfers and fisherfolk. (A permit is required to drive your vehicle onto this area.)

For sunbathers, Brigantine’s quiet beaches offer plenty of room to spread out. The beach narrows as you head north. The Brigantine Seawall, a six-block walkway at the northern tip of the island, welcomes you with oceanfront benches. In this area, there is ample parking, and dogs are allowed on the beach. Nautical types use the free boat launch at Fifth Street. Also on the north end, golfers can get a round in at the 18-hole Brigantine Golf Links.

Learn more about the island at the Brigantine Historical Museum and neighboring Sea Life Museum. The latter is a small gift shop and exhibition area for the Marine Mammal Stranding Center, an organization that rescues and rehabilitates ocean creatures. Just outside the museums, visitors often stop to snap a photo of the Brigantine Lighthouse, a nonoperational beacon positioned in the center of a traffic circle. While exploring, visit Donna Elias’s Brigantine Beach Gallery and Gift Shop. The Atlantic City native is known for her coastal paintings.

For dinner, try Italian restaurant Andre’s Wine Bar & Grill, or the Cove, a seafood-focused spot with a sushi menu. End the day with a treat from Richman’s Ice Cream and a sunset stroll on the beach. —Jacqueline Klecak 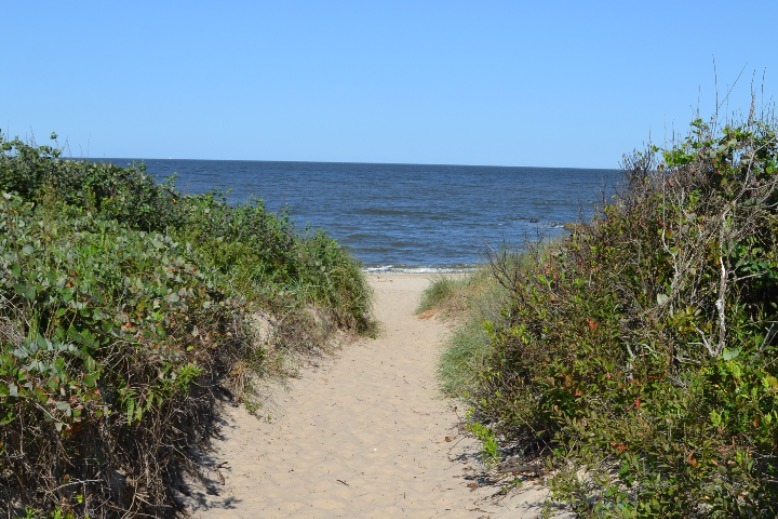 Higbee Beach has no boardwalk, no concessions, no lifeguards and no badge requirement. Photo by Ken Schlager

Higbee Beach is truly hidden—behind thickly wooded dunes, far off the beaten path. In fact, it takes a walk on a sandy path through the woods to reach this secluded beach on the Delaware Bay, about four miles from Cape May’s oceanfront. Once there, you’ll find no boardwalk, no concessions, no lifeguards and no badge requirement. As recently as 1999, neither were swimsuits required. Higbee’s days as a nude beach are behind it—although it’s said that some folks still go au naturel at the far reaches of the 1.5-mile-long strand. (Click here to find out which of Jersey’s beaches is the largest nude beach on the East Coast.)

Higbee mainly attracts nature lovers (it’s famed for birdwatching); families with small kids (attracted by the calm bay waters); and dog owners (leashed dogs are welcome). At the northern end, a long jetty is a favorite spot for fishing. The jetty marks the entrance to the Cape May Canal. From here, the Cape May-Lewes Ferry comes and goes throughout the day, looming incongruously large on the near horizon.

To find the beach, drive (or bike) to the end of New England Road (about a half mile past Bay Springs alpaca farm). The road dead-ends at a small gravel parking lot, suitable for about 20 cars. The PortaJohn on the edge of the lot is the last facility you’ll encounter. For more parking and a slightly shorter walk to the beach, turn right at the dead end. This leads to a second lot near the jetty. —Ken Schlager At the southernmost tip of LBI, this tiny, mostly residential stretch of Long Beach Township is about as far off the beaten path as you can get on this popular barrier island. A few minutes from bustling Beach Haven, Holgate’s awesome view (on a clear day) of the Atlantic City skyline alone is worth the drive (or bike ride).

Holgate’s beaches are easily accessible and far quieter than LBI’s hot spots. Lifeguards are on duty during the summer season, and beach badges are required. There’s plenty of parking—and restrooms—in the lot at the south end of Long Beach Boulevard.

At its southern end, Holgate gives way to a unit of the Edwin B. Forsythe National Wildlife Refuge. The protected area is closed through August 31 (nesting season for endangered birds), but open September 1–March 31 for fishing, hiking and wildlife observation. —Jennifer Finn The beaches of North Wildwood are a more subdued area of Five Mile Island. Photo by Jacqueline Klecak

It’s hard to think of the Wildwoods as anything but boisterous, but venture north of the famed amusement piers and you’ll discover that the volume turns down considerably. The beaches of North Wildwood, a more subdued area of Five Mile Island, cater to vacationers who would rather enjoy chill time with friends and family than thrill rides with the boardwalk crowds.

But after sun and surf? That’s when the North Wildwood bunch flocks to the dining and drinking district of Olde New Jersey Avenue. This summer, the three-block stretch is closed to vehicular traffic. Happy-hour menus, outdoor patios and sidewalk tables abound at places like Flip Flopz Beach Bar & Grill, the Inlet and North End American Grill. Also stop by perennial Irish establishments Keenan’s and the Anglesea Pub.

This summer’s special events at Olde New Jersey Avenue include the New Jersey State Barbecue Championship and Anglesea Blues Festival, July 8–10; and the Angesea Night Market and Food Truck Fest on June 30 (plus additional markets happening in July and August).

Continue unwinding in the gardens at the historic Hereford Inlet Lighthouse. Built in 1874, the lighthouse was the first structure in what was then called Anglesea. The beacon is still used as a navigational aid and a museum, although it is expected to be closed to visitors this summer due to the pandemic. Behind the grounds, you’ll find access to the Sea Wall, a 1-1/4 mile path for walking, running and fishing, with spectacular ocean views. If you turn right and stroll a few blocks, you’ll encounter the Lou Booth Amphitheater, which hosts free concerts under the stars, July 2–September 17. Rows of benches are available for seating.

Another North Wildwood fixture, the Montego Bay Resort, just received a facelift from Cape May native Carrie Locklyn, the lead designer of HGTV’s Extreme Makeover: Home Edition. Guests will benefit from a renovated lobby and suites, plus new furniture, wall art and other decor. The resort also houses a mini indoor waterpark with two slides and a tiki bar; both attractions are open to guests only. —Jacqueline Klecak The beach at Seaside Park stretches about 40 blocks, from busier Seaside Heights to quiet Island Beach State Park at its southern end. Photo by Joe Polillio

Think of Seaside Park as the calmer cousin to neighboring Seaside Heights. That’s been even more evident since Funtown Pier, once Seaside Park’s main draw, was damaged by Superstorm Sandy in 2012 and destroyed in a boardwalk fire the following year.

Where the pier once stood, Funtown Beach, a private BYOB beach club, now offers a more secluded seaside experience. Daily badges are $13, and cabanas are available. You can also buy a weekly or seasonal badge.

Beachgoers can also enjoy the surf and sun on Seaside Park’s public beach, which extends about 40 blocks south from the old pier area. Moving off the sand, Seaside Park’s rebuilt boardwalk offers just enough to amuse families for a few hours. The Sawmill, a local landmark since 1977, marks the northern extreme of the Seaside Park oceanfront. Known for its jumbo pizza slices, the Sawmill offers a full menu and a beach bar. There’s more boardwalk food nearby at Park Seafood, Philly Pretzel Factory, Playa Bowls, Kohr’s the Original, Three Brothers Pizza, and Beach Tacos.

Care to shop? The Vintage Anchor boutique sells chic ensembles and accessories, with none of the usual cheesy Shore insignia.

For youngsters, the boardwalk has five kiddie rides, a water-gun game, and Park Arcade, a small amusement center with Skee-Ball tournaments and interactive games, such as live Deal or No Deal. Nestled between Ocean City and Sea Isle City, this often-overlooked shorefront community (population: 158) boasts a rare free beach with a lifeguard on duty, plus free street parking. Located at the northern tip of Ludlam Island, a seven-mile sliver of land stretching from Corson’s Inlet to Townsends Inlet, Strathmere occupies less than one square mile. As such, it lacks a boardwalk or any public restrooms—which is just fine with its core of dedicated fans.

Driving south on the bridge over Strathmere Bay, you’ll spot the historic Deauville Inn on your right; it’s one of the best places around to watch the sunset. You can also take in the bayside views at Twisties Tavern on the Bay, a laid-back bar and seafood eatery with irregular hours. (Check ahead to make sure it’s open.)

Behind high sand dunes at the southern end of Strathmere is a section called Whale Beach, which gets its name from the whales that periodically beach themselves there. No lifeguards patrol this area, so the crowds here are even thinner. However, parking is limited.