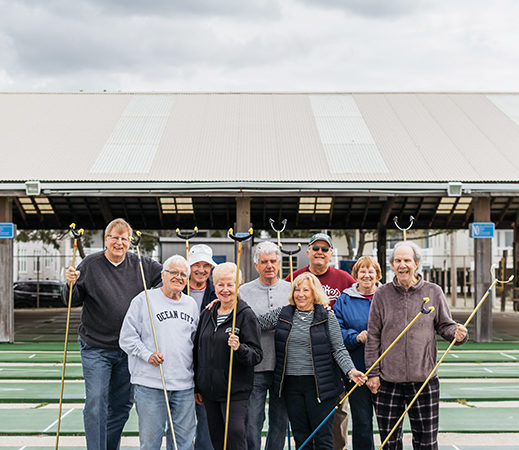 Sun, surf and sand are selling points for the Jersey Shore. For nearly 80 years, Ocean City has offered a fourth S: shuffleboard.

Formed in 1941, the Ocean City Shuffleboard Club keeps the sport alive with a series of summer tournaments. The club offers visitors a chance to play the game at six covered and 10 open courts on Fifth Street, just off the boardwalk.

“Thousands of people come to play each summer,” says Ron Petrik of Ocean City, one of about 50 club members. “People ask, ‘How much does it cost?’ We tell them it’s free. It’s a bargain.”

Tom Palmer, the club historian, was a latecomer to the shuffleboard scene. Now 77, he joined the club with his grandson Alec Helm in 2008. “I enjoy being outside, the exercise, but mostly the friendships which have been formed,” says Palmer, who offers lessons and clinics to new players from Memorial Day through Labor Day.

In shuffleboard, players use cue sticks to propel discs along a 39-foot-long court to a scoring area. Players score points by landing in a specific box and prevent their opponents from scoring by knocking away their discs. “It’s exactly the same strategy as curling,” says Palmer, referring to the Winter Olympics game played on ice.

Age shouldn’t be a barrier in shuffleboard, adds Petrik. “You can play it your whole life.”