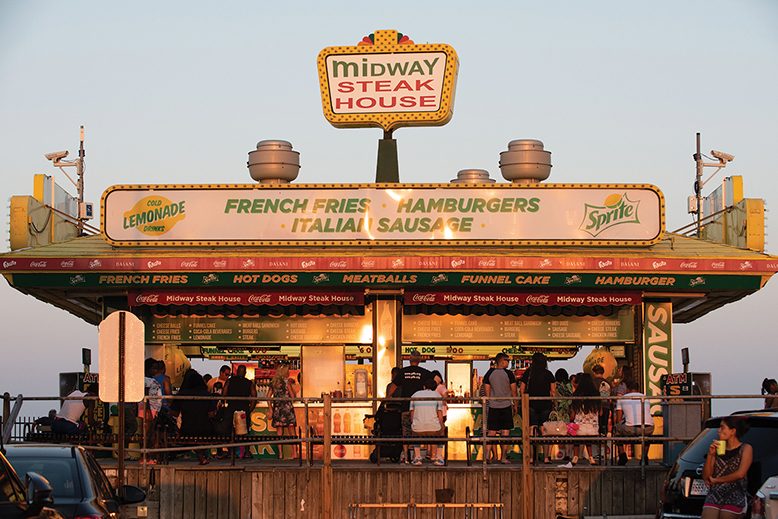 Seaside Heights is proud to have it both ways. Its amusement rides and boardwalk games make for family fun. Its nightlife and many nicely priced motels attract young couples and singles.

Mayor Anthony Vaz sees a common denominator. The town, he says, “is a unique enjoyment for Shore lovers.”

And it keeps getting better. In 2012, Superstorm Sandy crashed into Seaside Heights, damaging many boardwalk businesses and devastating the Casino Pier. The storm tumbled the Jet Star roller coaster into the surf, where it became a much-photographed symbol of Sandy’s wrath.

Today, the businesses are back and the Casino Pier has been rebuilt. Last year, the Hydrus roller coaster replaced the ill-fated Jet Star. “[We’re] continually improving and innovating in every aspect of the experience, particularly value, fun and comfort,” says Vaz. The Ocean County town has also had to recover from the poor image MTV’s Jersey Shore reality show left behind. It has done that by building up its family-friendly attractions. What’s more, in 2013, one year after Sandy, a boardwalk fire destroyed Funtown Pier in neighboring Seaside Park. The pier has not been rebuilt, but boardwalk storefronts from Stockton Avenue in Seaside Park to Lincoln Avenue in Seaside Heights have been restored.

Even the Seaside beaches have a new look. A federal beach-replenishment effort widened the beaches and added taller, wider sand dunes, providing better storm protection and more space to spread out. New ramps over the dunes provide improved beach access.

On the boards during peak season, couples hop on the Sky Ride for an aerial cruise above the boardwalk and the beach. Families fastened into the Hydrus roller coaster scream as they plummet 72 feet at 45 miles per hour. Twenty-somethings fill their stomachs with Mexican food and margaritas at Spicy Cantina (500 Ocean Terrace).

New this year on Casino Pier, thrill seekers will find the Centrifuge, an indoor, spinning scrambler with strobe lights similar to the one Sandy destroyed. There are also three new kiddie rides. Beyond Casino Pier’s more than two dozen attractions, vacationers can try their skills at Smuggler’s Quay Adventure Golf Course or cool off at Breakwater Beach’s 10 water amusements. Arcades abound on the Seaside boardwalk. Among the favorites: Lucky Leo’s, Coin Castle, Sonny’s & Rickey’s and Casino Arcade. On summer nights, the barhopping is easy. Drink up at the 1950s-themed Jimbo’s Bar & Grill (715 Boardwalk). Play billiards and darts or dance at Hemingway’s Café (612 Boulevard). Or jam out with live cover bands every weekend at Beachcomber Bar & Grill (100 Ocean Terrace).

For lovers of more sophisticated fare, Broadway Meets the Beach is a free summer performance series with cast members from the Great White Way at the Franklin Avenue Stage.

Ever wish you could sleep on the beach? On one June night and one in August, oudoorsy types pitch tents on the sand and sleep under the stars. You’ll wake up refreshed for another fun day in Seaside Heights.