Steve Steiner’s survival instincts kicked in quickly. It was March 2020 and, to help slow the spread of Covid-19, public gatherings were canceled, performing arts centers were mandated to close, and social-distancing measures were announced. The producing artistic director for Surflight Theatre in Beach Haven knew these restrictions did not bode well for the regional theater.

“We had to do something just for survival,” says Steiner.

If Surflight could not find a way to generate revenue, Steiner was bracing for a loss for the theater of  “well over $600,000.”

Desperation fostered creativity. Steiner and his crew hatched the idea for a socially distant outdoor theater season. They planned to erect a 50-by-100-foot tent and build an outdoor stage across the street in Veterans Park. They assembled all materials in their shop and waited for the green light from Governor Phil Murphy. On June 22, the capacity for outdoor gatherings was raised to 250 people.

Steiner’s preparation paid off. Just five days later, the outdoor theater space, including lighting and sound equipment, was installed. Last summer, Surflight staged Cabaret, Mamma Mia and Almost Heaven, as well as several concerts, comedy nights and children’s performances. Masked audiences of 175–210 people showed up seven times per week for the 1 hour and 45 minute shows. There were no intermissions or concessions. Public park bathrooms served as the facilities.

Luck also had a role in this success story. Every year, the theater offers housing for 55 theater artists, including actors, directors and tech crew. For summer 2020, that housing acted as what Steiner calls “a poor man’s NBA bubble—all of the separation and absolutely none of the perks.” Theater artists were tested every two weeks and required to only interact with each other. Before productions, actors dressed in their housing units. Rehearsals and set building took place outdoors. “Even though we were our own little bubble,” says Steiner, “we wanted to do everything outside because it was safe. It was part of what helped make it work.” 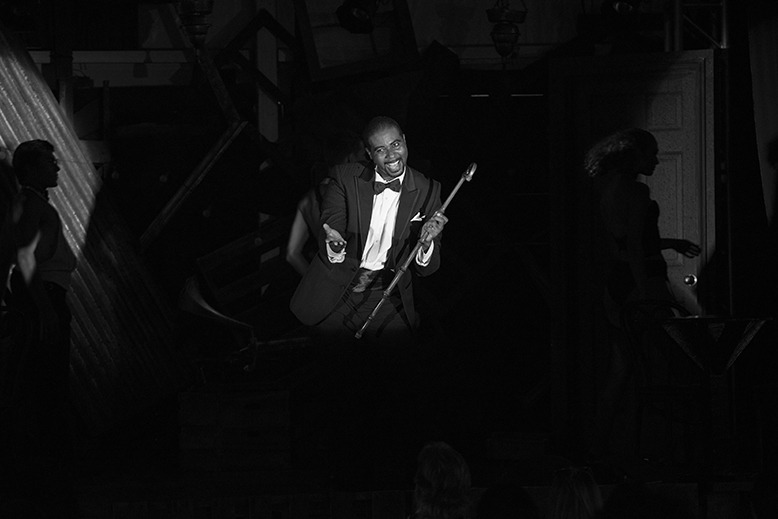 A moment from Cabaret. Photo by Studio63 Photography

Every other Shore theater was in the same boat as Surflight. Each had to adapt as they approached the summer season, their busiest and most lucrative time of the year. Some pivoted to virtual performances, readings and galas. Others amped up children’s programming online and, eventually, in-person. Others turned parking lots into venues. All closely followed the evolving government protocols. Along the way, they checked in with audiences through e-mail surveys and social media, asking basically the same question: Under what conditions will you feel comfortable returning to an indoor performance?

Most Shore theaters are hoping the fall will bring a close-to-normal indoor experience, with increased capacity and less distancing. For the summer, they are offering a variety of unique experiences.

Surflight Theatre and East Lynne Theater Company in Cape May plan to stick with outdoor theater performances. The Axelrod Performing Arts Center in Deal is pivoting to outdoor concerts at multiple locations. Cape May Stage and Algonquin Arts Theatre in Manasquan are venturing indoors. The New Jersey Repertory Company in Long Branch plans to produce parking-lot plays with a fire escape as the stage.

Beginning in July, Surflight will once again invite patrons to attend productions under the tent. The summer season includes Annie, A Chorus Line, Xanadu, Sh-Boom! Life Could Be A Dream, and I Love You, You’re Perfect, Now Change.

For its outdoor productions, East Lynne Theater Company is using a variety of unique locations, including the backyards of private Cape May residences, where short-story readings—called Tales of the Victorians—will take place Thursdays at 4 pm for audiences of about 30 people.

On seven Saturdays throughout the summer, East Lynne will transport about 100 guests to 1916 during Vaudeville Variety, a 75-minute production of skits and songs at West Cape May’s Backyard Park. Setting up—and taking down—the stage, sound equipment and seating for the outdoor theater environment is no easy task. Artistic director Gayle Stahlhuth predicts the entire process, including strike, will take 8–10 hours for each performance.

Since audiences will be socially distanced, Stahlhuth says patrons will probably be able to remove their masks. “The actors can actually see [the audience] laugh and smile,” she says. “That’s worth a lot.”

During the past year, East Lynne largely focused on virtual productions, but meeting the Covid-19 standards of the Actors’ Equity Association, the union that represents actors and stage managers, has been a challenge. It took months for Equity to approve a contract for one virtual play. The contract was just the fourth in the country approved by Equity since mid-March 2020. 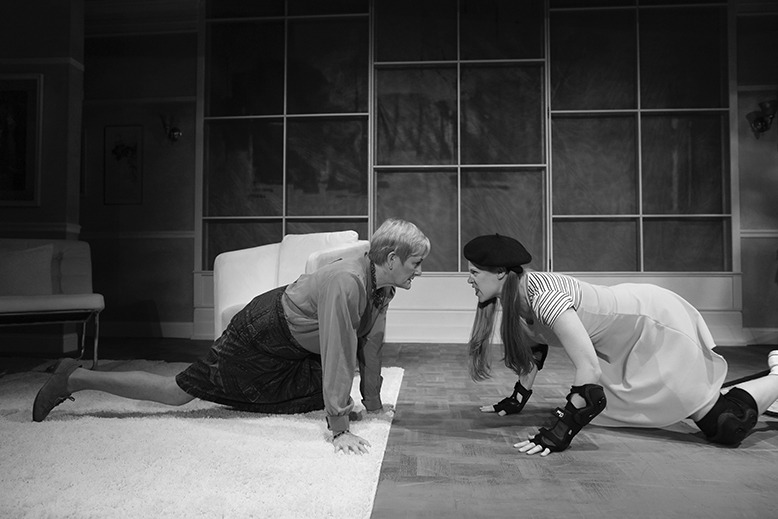 Cape May Stage must also navigate Equity rules. The theater, which is located in a renovated historic church, is moving forward with an indoor season. Equity mandates that a Covid safety officer be backstage at every performance and rehearsal to ensure temperatures are taken and props and costumes are sanitized.

Producing artistic director Roy Steinberg says Cape May Stage is “cautiously optimistic” to open their doors in July with Ann, a play about the former governor of Texas Ann Richards. Kate McCauley Hathaway, Anne Hathaway’s mother and a Cape May Stage regular, will star.

For Cape May Stage, one gratifying side effect of pandemic restrictions and closures has been the flood of donations from patrons.

“One of the great fears one has when you’re away for a year is people are going to forget about you or think, I didn’t really need that, so why spend money to do that?” says Steinberg, “But there’s been such overwhelming support. I get checks literally every single day.” Steinberg also cites Governor Murphy’s support of the arts as a vital resource. “I don’t think we would have made it if we didn’t have the patrons and the government helping us.”

Algonquin Arts Theatre is also focused on staying connected with audiences. The theater’s annual Broadway Bash fundraiser moved online last June and included the option to have food and drink delivered to patrons’ doorsteps. Executive director Pamela Ward admits that the 75-minute virtual performance wasn’t profitable, “but it was certainly a good way to let people know we were still here.” This year’s fundraiser will be in-person on June 10.

Algonquin furloughed 70 percent of its staff almost immediately when the pandemic hit. Luckily, the nonprofit had been having its best season ever. “We were fairly well positioned at that point to weather a short storm,” says Ward, “but we were certainly not prepared for an essentially yearlong shutdown.” Algonquin mainly focused on online education programs until it was able to transition to in-person classes in July 2020. Algonquin also staged outdoor concerts in its parking lot. This year, the theater is collaborating with the borough of Manasquan to provide entertainment on Main Street, which is closed to traffic on certain summer days.

Since November, Algonquin has slowly scaled up indoor performances. This summer, the Algonquin stage will stay energized with Godspell in July and Rent in August.

Meanwhile, in Long Branch, what is known as a ghost light shines from the stage of the New Jersey Repertory Company’s otherwise empty theater. The single light illuminates the set from the theater’s last production, The Promotion. Until NJ Rep reopens in the fall, that set will sit, waiting.

“We, like all other theaters,” says executive producer Gabor Barabas, “are concerned about how Covid and this period of uncertainty will impact us. We’re very confident that we’re coming back in the fall, if things open up sufficiently.”

During the past year, NJ Rep put on plays via Zoom. The theater also launched a virtual museum. Barabas thinks NJ Rep will continue producing virtual work even after the physical theater reopens. “At first, we saw it as a temporary, transitional activity,” says Barabas, “but it’s brought all kinds of new people to view our work.”

NJ Rep’s second venue, the West End Arts Center, is under renovation, but a large fire escape outside is expected to serve as a stage this summer for five plays. Audiences will be seated in the parking lot. This secondary location also has a large lawn where a temporary stage might be used for readings of new plays. At deadline, specific plays and readings had not yet been announced.

Axelrod’s relationship with Bell Works has since expanded. This summer, Axelrod kicks off the Vogel Summer Concert Series, which will take place at the rooftop deck at Bell Works and the Arthur Pryor Bandshell on the Asbury Park boardwalk.

On Wednesday nights in Asbury Park and Thursday nights in Holmdel, expect performances by Broadway stars, Tony nominees and tribute bands, including American Idol alum Constantine Maroulis, Jersey Boys performer Jarrod Spector, and Motown-inspired group the Motor City Revue. A full bar and menu will be available at both venues.

Axelrod hopes to stage Grease indoors at its main location in October. This past March, Axelrod sent out a survey to gauge patron readiness to go back inside the theater. About 300 people responded on the first day. “Mostly, it was very positive,” says DePrisco. Many people indicated that they wanted to return to an indoor space and wear a mask. “I feel like we’re finally turning the corner on this pandemic,” he says, “and with the vaccinations happening, I think the attitude is changing.”

DePrisco predicts that audiences will eagerly seek outdoor arts-related events this summer. “There’s something about a live performance and sharing the space with the performers.”