Eli Manning poses with members of the NJ/NY Gotham FC after a practice. Photo courtesy of Devon Cafaro/Gotham FC

The National Women’s Soccer League club, based in Harrison, announced Wednesday that Manning has joined Gotham FC as a minority owner, as has Giants senior vice president and chief commercial officer Pete Guelli. The Big Blue duo joins an ownership group that has added seven other investors this year.

“I have lived and worked in this community for almost two decades,” Manning, a Jersey resident, said in a statement. “It’s home to me, and Gotham FC is my family’s favorite soccer club. Combine that with the organization’s strong leadership, talented roster, and sustained growth, and it became clear that joining this great group was a fantastic opportunity.” 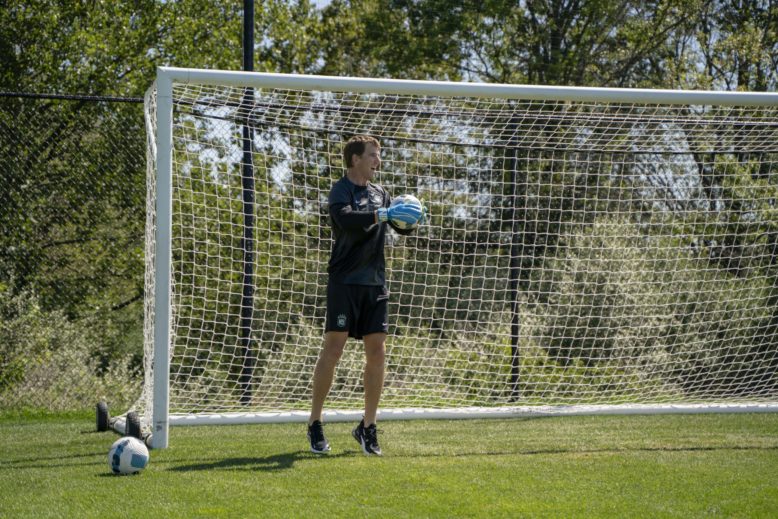 Manning added that his daughters helped inspire his decision to join Gotham FC in a video released by the team.

“As a dad, I want to make sure that my daughters have all the athletic opportunities that I was blessed with,” the two-time Super Bowl champion said before announcing his ownership stake. “We’re driving what happens next in the world’s game with some of the greatest athletes in the game, and I can’t imagine what’s more exciting than being a part of that.”

“Eli is known for the positive and influential impact he has on our communities,” Tammy Murphy, Gotham FC’s club chair, said in a statement. “His legendary work ethic, drive for success, and passion for giving back to the community will be tremendous assets for our club. Pete brings a depth of sports acumen that will bolster all we are working to achieve. It’s my honor to welcome them both to the Gotham FC family.”