Happy Women’s History Month! New Jersey is home to a number of courageous, intelligent, ambitious and exceptional women. To celebrate the month, we’ve pulled some of our favorite profiles. Read them all below, and be sure to check out last year’s list of 11 Wow-Worthy Women from New Jersey. 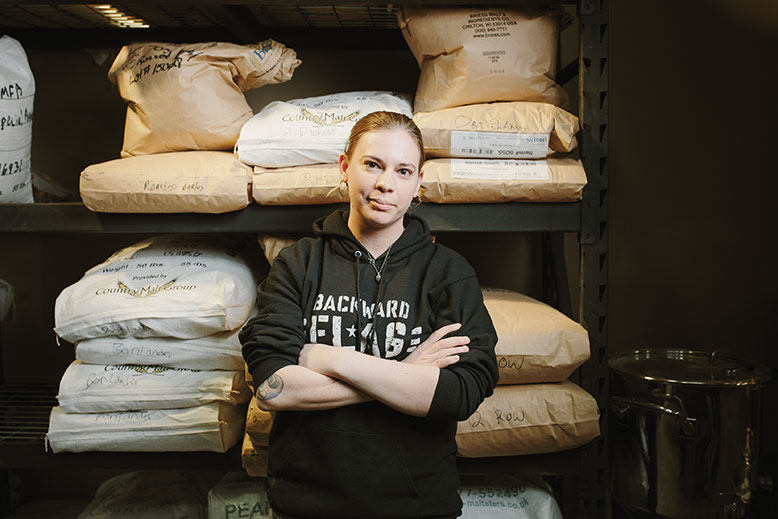 Torie Fisher turned 19 in the Iraqi desert. Deployed twice as an Army combat soldier, the daughter and granddaughter of military men volunteered to spend her young-adult years doing the life-threatening things most of us only watch on the news.

Fisher is likely Jersey’s only female brewer to earn an Air Medal, but all eight of the state’s professional female brewers can rightfully claim to be bad-asses. Though their backgrounds and training vary, they are determined, intellectually curious, multitasking women who work a physically demanding job. And they share three of the chief qualities that portend success in brewing: a deep love of beer, a willingness to do manual labor, and a passion for mastering complex scientific and mechanical processes. When Olympia Dukakis found out she was nominated for an Academy Award for best supporting actress for her role in the 1987 film Moonstruck, she was at the Whole Theatre in Montclair, surrounded by family and friends.

Now 84, Dukakis is the subject of an upcoming documentary about her storied life as an actress, director and theater impresario. Olympia Dukakis: Undefined also serves as a testament to her endurance as an entertainer. NJM: A recent Newsweek cover story, “Women in Weed,” quoted a drug-reform attorney who said, “The mom in her 40s is the one with the power to push marijuana into the mainstream.”
ND: Absolutely…. Women are 51 percent of the voters in New Jersey. [They can] make or break any legislation. But also I think it’s a perception that women have been more reticent in coming forward and saying, “Yes, I smoke marijuana”…. As more women come out, the image starts to change. Showing a 40-year-old mom who is an avid cannabis consumer is going to change people’s perceptions. In August, Paulette Brown, 64, became the first woman of color to head the American Bar Association, the more than 400,000-member advocacy organization for the nation’s lawyers. As ABA president, Brown has a bully pulpit from which to advance the causes she feels are critical to the profession—among them diversity and inclusion, signature issues for her in a profession that has been notoriously slow to diversify. According to ABA data, 88 percent of America’s lawyers are white, and while women represent half of all law students, only 17 percent of equity partners at law firms are female, and only 2 percent are women of color. Laurel Hester selflessly protected the people of New Jersey for 24 years as a detective lieutenant with the Ocean County Prosecutor’s Office. In 2004, while still on the force, she was diagnosed with terminal lung cancer. Her dying wish to pass on her pension benefits to her registered domestic partner, Stacie Andree, was repeatedly denied by the Ocean County Freeholders.

The heartrending story of Hester and Andree and their fight for equal rights is now a major motion picture, Freeheld, starring Academy Award-winner Julianne Moore as Hester and Academy Award-nominee Ellen Page as Andree. “By the Block,” Laura Petrovich-Cheney’s art exhibition, combines her love of found wood—her preferred sculpting medium—with her passion for quilting, a lifelong hobby. Haddonfield, her hometown, has a strong quilting tradition dating back to its days as a stop on the Underground Railroad. “Patchwork quilts are a very feminine art,” says Petrovich-Cheney, who, “as a woman in a woodshop,” strives to evoke femininity in her work. She compares repurposing Sandy’s discarded wood to the tradition of stitching secret messages (known as quilt codes): each of her quilts tells its own story of the Shore and survival. Judy Blume, who has sold 85 million books in 32 languages and is known for boldly exploring topics such as menstruation, religion and racism in her coming-of-age novels, writes about the three disastrous plane crashes that occurred in her home of Elizabeth in her adult novel, In the Unlikely Event (Knopf).

An eighth-grader approaching her 14th birthday when the first crash occurred, young Blume was mostly interested in day trips “across the river” to New York City, reading 25-cent Nancy Drew novels and listening to her family’s jukebox in their newly finished basement. But her memory of the reaction to the tragedies is “very, very clear.” May 2015
By Breanne McCarthy

At 75, Paterson-born poet Maria Mazziotti Gillan won’t rest on her laurels, substantial though they are. Along a road that she admits has at times been rough, Gillan has amassed a parade of accomplishments. She grew up in a cold-water flat on 17th Street, the shy daughter of Italian immigrants. “Believe me, at 19, people thought I was crazy when I said I wanted to be a poet,” she confesses. “Like, ‘Who the hell can make a living as a poet?’” Some marvel that this 79-year-old Jewish grandmother is running, in effect, the Watergate hearings of New Jersey. It’s been noted in such disparate publications as the Jewish Daily Forward and Vanity Fair. It inspired a song parody based on Katie Perry’s hit “Roar” at this year’s New Jersey Press Association’s Legislative Correspondents Show. Even State Senator Loretta Weinberg winks at the irony of grandmotherly power by placing a prized yard-sale find—a poster of Golda Meir—outside her office door. When she was a girl, Suzanne Strassburger sold Girl Scout cookies, but she wasn’t happy about it. “I didn’t want to sell cookies,” she says. “I wanted to sell steaks.”

Suzanne and Andrea are the fifth generation of their family in the meat business. In the late 1800s, their great-grandfather Harry Strassburger, the son of an Alsatian immigrant, set up Strassburger Meats in the Bronx with his wife’s father, a long-time manager for Armour and Company. Strassburger Meats later moved to the 125th Street Meat Market in Harlem. Suzanne apprenticed there in her teens. After college, she worked various jobs in catering and the meat business before settling in at the family firm, which by then had moved to West 14th Street in Manhattan. In 2002, Suzanne succeeded her father, Peter, as president. In 2006, she moved the company to Carlstadt. “There are no words in the English language to express the sufferings I witnessed today.” So wrote Cornelia Hancock, a 23-year-old Quaker nurse from Salem County, in a letter to a cousin. The letter is dated July 7, 1863, four days after the Battle of Gettysburg, the monumental engagement in south-central Pennsylvania that, 150 years ago this month, turned the Civil War in favor of the Union cause.

Cornelia, eager to assist her country, almost willed herself to the battlefield where so many had fallen. “I was the first woman who reached the Second Corps after the three days of fighting,” Cornelia wrote. She learned later that 2,000 men of the Second Corps had been wounded in the battle. “It is very beautiful, rolling country here,” she told her cousin, “but now, for five miles around, there is an awful smell of putrefaction.”