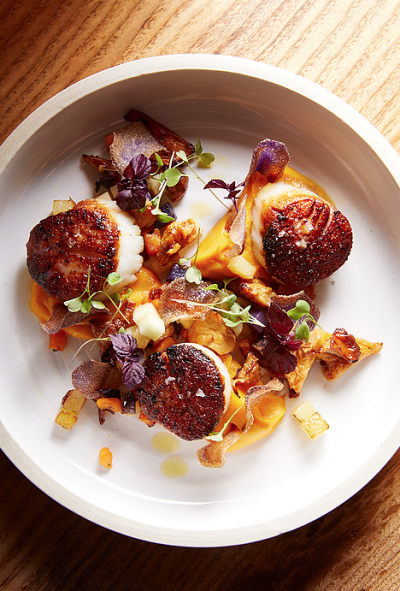 Dominic Piperno used to take the train from his home in Collingswood to and from his job as sous chef at the acclaimed Philadelphia restaurant Vernick Food and Drink. “On the train were all these cooks and servers from Jersey,” he says, “because Philly’s where you can make money to further your career.”

To change the paradigm, Piperno and his wife, Lindsay, a front-of-house veteran, opened Hearthside in Collingswood in September. They built the restaurant to accommodate a big, wood-burning grill and oven like the ones Piperno used at Vernick and during culinary school in Chianti, Italy.

Much of the menu is cooked over wood, from sweet, heads-on Gulf prawns, finished with lemon-garlic butter, to the ethereal apple fritters, their batter enriched with applesauce made from fruit slow roasted in the oven overnight.

The open kitchen and hearth, as they call it, give the restaurant a glow. Aiding the cozy vibe are sensationally comfortable banquettes and cushioned chairs.

Piperno and co-executive chef Aaron Gottesman, friends since they worked together briefly at Vernick, aim to keep things “approachable but not dumbed down,” says Gottesman.

Collingswood’s standout establishment is still the Sicilian BYO, Zeppoli, where Piperno cooked for three years. Hearthside isn’t at that level just yet. During my first dinner, 10 minutes passed before a server appeared at my table, and the food was inconsistent.

On the problematic side: Skate wing, limp and basic, on under-seasoned collards and ham broth; tiny mussels in a too-sweet coconut curry; an inedibly sweet pistachio-rose semifreddo.

A few weeks later, things had improved significantly. Service was personable and proficient. Every dish delivered, including the aforementioned prawns and apple fritters.

But the dish of the night was rabbit tagliatelle, the succulent meat cured, roasted, braised and nestled amidst al dente house-made noodles in a light tomato sauce fortified with reduced braising liquid and fresh oregano.

While at Zeppoli, Piperno made countless plates of chef Joe Baldino’s definitive rabbit cacciatore. The tagliatelle was a clear tribute that also managed to feel original. Piperno and Gottesman added tiny cubes of provolone to the pasta just before serving. It melted slowly into the dish, releasing its pleasantly funky perfume and flavor in counterpoint to the woodsy oregano.

Hearthside has made big strides. If Piperno and Gottesman maintain the momentum, they might even entice Philly chefs to cross the river to work for them.