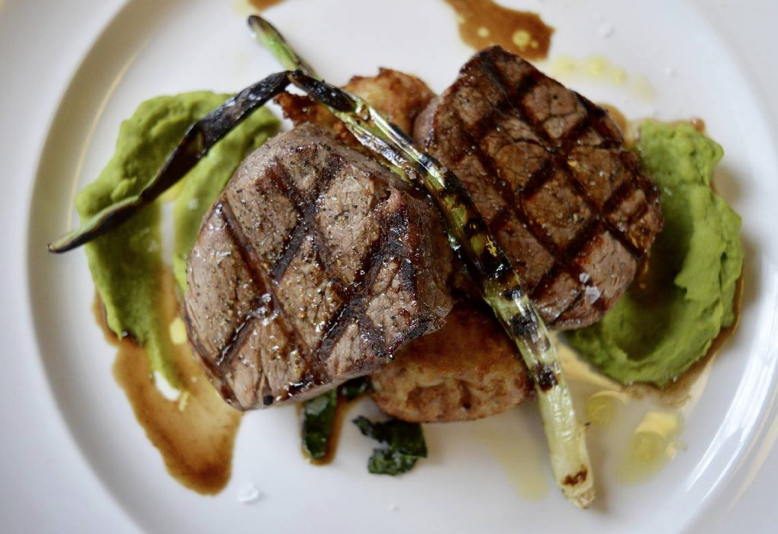 Like many coastal Jersey restaurants, Edward’s Steakhouse in Jersey City was shuttered by Hurricane Sandy. With damage limited to flooding of its below-street-level ground floor, it was able to reopen after seven months. Daniel de la Vega—who had bought the place from founder Edward Gozdz—and general manager Thomas Harris managed to rehire the entire 20-person staff, whom they had helped find temporary work during repairs.

In 2015, Harris, who had started at Edward’s as a bartender when it opened in 2004, partnered with four other Jersey City natives to buy the place.

“To be fair,” says Harris, now managing partner, “it was already operating at a high level. But we increased portion sizes on some steaks and partnered with DeBragga, which had moved to Jersey City, to get a hands-on relationship with a top vendor. They hand select and 28-day dry-age our beef, all Certified Angus. Most of what we buy is USDA Choice.”

“The marbling in prime is helpful at home,” Harris responds, “but with an 1,800-degree broiler, the skill of our broiler men, and the meat we get from DeBragga, Prime would not increase the actual quality of what’s on the plate.”

In any case, the steaks are excellent. The tender, un-aged filet mignon and the robust, aged New York and Kansas City sirloins each arrived at the requested temperature, with a lovely crust. Under each steak lay an unusual bonus: a slim puddle of reduced veal stock that upped the flavor ante. The steaks also came with steak sauce, blue-cheese butter and a stimulating, spicy-smoky, house-made chipotle barbecue sauce. Sides of baked potato and creamed spinach were fine, if standard-issue. The vegetarian in our group, who ordered an entrée of brown rice and julienned vegetables with hoisin sauce, found the rice fluffy and the veggies fresh and was perfectly satisfied.

The upstairs dining room, pleasant in pastels and earth tones, fosters a sense of ease. The bar, a few steps down from the sidewalk, on what locals call the garden level (many residential row houses have gardens out back), has a vintage tavern feel that lends itself to conversation. Baskets of house-made potato chips add to the convivial atmosphere.

However, dining at Edward’s in August—peak tomato season—I was dismayed to find the wedge salad topped with tomatoes that looked and tasted like wet cardboard. Another affront were twin 6-ounce South African lobster tails—previously frozen, a little rubbery and $58. For that price, one could serve a goliath of a super-fresh Atlantic Coast lobster.

Also odd was serving an Aperol spritz with prosecco and club soda in a pint glass. Fine for a Guinness, but klutzy for a cocktail. The problem with an Edward’s Elixir—a captivating cocktail made with vodka, ginger liqueur, sour mix and fresh lemon—was that the rim of the wine glass had been dipped in honey, which dripped down the sides onto the stem and base. Cue washroom visit to unstick hands.

Cheesecake, chocolate mousse cake and tiramisu are made by Nasto’s in Newark, and are good. Crème brûlée and ice box cake are made in-house. The latter is the must-have. Layers of chocolate wafers alternate with intermingled mascarpone and whipped cream and layers of chocolate syrup. After firming in the fridge for 72 hours, it comes out ready to take on the world.