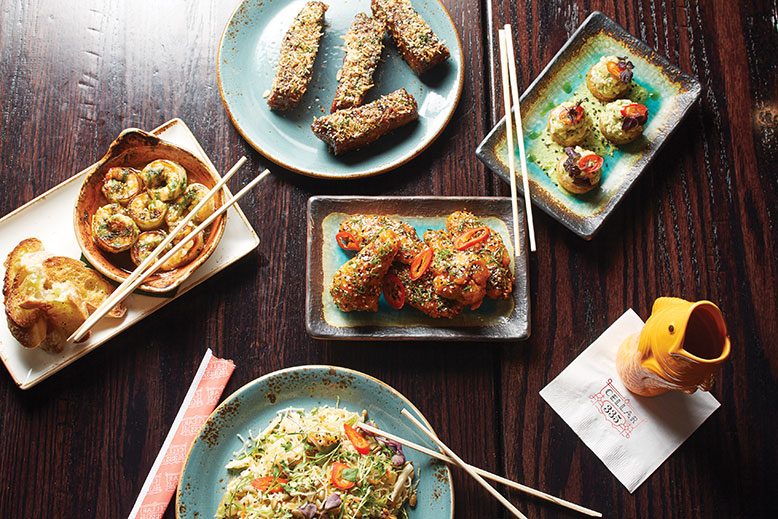 Chefs who put thought and effort into their salads, I’ve found, can be trusted to do the same with every dish. The temptation to just toss off a salad may be greatest at a restaurant that doesn’t need a good one, let alone a great one, to get people in the door—a restaurant, for example, like Cellar 335 in Jersey City.
Executive chef and owner Jamie Knott knows how to reel people in. He baits his hooks with atavistic attractions like beef-cheek bao buns; potato Sacri-fries with bacon and cheese sauce; pork ribs with tamarind barbecue sauce; spicy wings; and tiki-style cocktails such as the smoky Fightin’ Five, served in a ceramic skull. Three of Cellar 335’s signature cocktails come in 36-to-44-ounce fishbowl formats, including the $36 Zombie Priest Punch. The hashtag for happy hour is #letsluau.

Does that bode well for the $13 tropical salad?

Very well, it turns out. Mounded on a sky-blue earthenware plate, ingredients cut so each forkful is inclusive, it’s a fiesta of napa cabbage, snow peas, cilantro, carrots, pickled Fresno chilies, fresh pineapple and kiwi tossed with white and black sesame seeds in a sesame vinaigrette showered with crispy noodles and fresh lime juice. A mouthful to describe, but to eat? Pure pleasure. Will yourself to slow down or you miss the nuances.

“I can’t stand a mundane salad,” says Knott merrily. “It can’t be monochromatic. I’m not a vanilla guy. It has to be crispy, fresh, juicy. I want it to punch.”
Virtually everything at Cellar 335 does—not in the pile-driver mode of Mike Tyson, but in the butterfly-and-bee style of early Muhammad Ali. Take Knott’s finger-licking Duroc pork ribs. Thick and meaty, they’re slathered with an Asian rub and cooked sous vide 14 hours to insane tenderness. Then they’re tossed in rice flour, flash fried and finished with a seductive tamarind-Philippine lime sauce. For textural contrast, they’re sprinkled with toasted coconut, crispy shallots and sesame seeds. Result: a knockout.

Cellar 335 might have gotten by on Polynesian shtick, strong drink and passable food, but the epicenter of Jersey City’s ambitious downtown dining scene is just a few blocks east and, anyway, Knott is no schlockmeister.

The Nutley native, 36, was executive chef of Artisanal in Manhattan and then a corporate executive chef for Laurent Tourondel’s BLT Restaurant Group before taking over the sagging Saddle River Inn in 2013. The next year, the BYO earned its first of three straight appearances so far on NJM’s annual list of the Top 25 restaurants in the state.

“To me, Saddle River is pressed slacks, buttoned shirt and a blazer,” Knott says, “whereas the Cellar is ripped jeans and a vintage band T-shirt. I have those two sides to me.”

Cellar 335, which opened last August, occupies an actual cellar. It’s easy to miss. The below-sidewalk entrance has a small sign and barred windows that suggest a lockup for drying out from a good time more than a place to have one.

The 1910 building is called White Eagle Hall. For many years, it held the gym where the renowned St. Anthony High School basketball team—28 state championships—practiced. The lockers, showers and training area were in the basement. (The upstairs reopened this spring as a theater and event space.) Recently, Basketball Hall of Fame coach Bob Hurley Sr., still coaching St. Anthony at 69, stopped by for dinner.

“He almost fell over when he walked in,” Knott says with a laugh. “He was pointing around: ‘This is where the showers were; guys used to do sit-ups over there. This is amazing!’”

What you see now is a plush boîte in black and red, sexy yet understated, with a living-moss wall and fetching menu illustrations by the Jersey City-based muralist Ivan Petro, a.k.a. Mustart.

Knott, ever the detail freak, picked all the art, tableware, lights, fabrics—even the buttons in the tufted upholstery. “Seeing it all come together was very rewarding,” he says.

Customers are likely to share that feeling. The fanciful cocktails, developed by mixologist Josh Fossitt and augmented by GM Peter Arnone, lower your guard. Their delicious, well-balanced flavors go down easy but sneak up on you.

Gird yourself with items from the menu’s By the Piece section. Its delights include the bao buns, especially the meltingly rich beef cheek and the not-so-Irish corned beef and cabbage, which hijacks the vegetable to France for duckfat-bacon-honey-red wine vinegar treatment. The magnificent smoked-cheddar poblano mini corn muffins are gluten free and served hot enough to melt the thick pats of honey-togarashi-spiced butter on top.

While there are guilty pleasures, one that is guilt free (and, like much of the menu, gluten free) is the avocado fried rice with scrambled eggs. Unlike typical fried rice, it isn’t oily. Also atypical, it’s full of bite-size, fresh vegetables, bright flavors and contrasting textures. In a menu full of sensuous temptations, you wouldn’t figure it to be the restaurant’s best-seller, but it is.

You’ll find it in the To Share section, home of the tropical salad, ribs and crunchy Sacri-Fries. Here you’ll also encounter luscious hamachi tartare on crisp rice cakes with cucumber and ponzu sauce; sizzling “Shrimp & Garlic” with toast to soak up every precious drop of the parsley-lemon-sherry sauce; and plump Korean-style wings with choice of three sauces. (We went with spicy maple chipotle. Sticky fingers, no regrets.)

It’s easy to build satisfying meals from these two categories. But the three options in Large Format (crispy chicken; duck duet; and prime Polynesian rib eye) beckon. For $29, it’s hard to imagine a more flavorful and tender steak than the rib eye in its black pepper-honey sauce with scallions. It’s the dish that, in slightly different form, sealed the job of chef de cuisine for Jared Bane, 29, who was working in New York for chef Laurent Tourondel.

“I ate Jared’s food and thought, This guy’s got it. You just know,” Knott says. “When I had the rib eye, I said, ‘This is the first thing on the menu.’ It was that good.”

By the end of a Cellar 335 meal, your cloth napkin will be as limp as a boxing cornerman’s towel. The other sweet science, pastry, is the domain of chef John Chomenko. He makes luscious tres leche cake and rich apple hand pies. But my top tout is his plate of four gluten-free ice cream sandwiches. They look like oversize Parisian macarons and are as varied in flavor and color, though more substantial and soothing. The boxing gloves are off. The sandwiches are the well-earned rubdown.