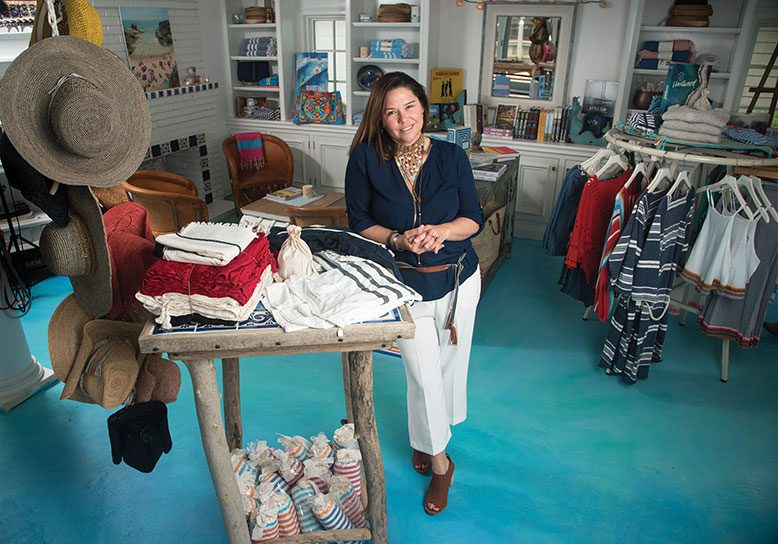 Wendy Dinneen culls her hip women's apparel, menswear, children's items and accessories from around the world. The addition of reading material is a nod to the community vibe being cultivated to rebuild Sandy-ravaged Bay Head.
Photo by Jim Connolly

Wendy Dinneen has a serious case of wanderlust and, like many free spirits, Dinneen wants to spread the love, so she opened Del Mar East, a bohemian boutique in Bay Head.

While in grad school, she dabbled in fashion. By the time she earned her master’s in international relations, she had launched Blissfully Unaware, a resort-wear collection with a tropical, hippie vibe. “I was able to combine my love of travel and cultures into a chic and simple line for women,” she says.

The collection can be found at select resorts and spas around the world, but to Dinneen’s surprise, all the international travel left her craving home life with her physician husband, Bob Walker, and their three young boys. “My husband suggested I start something local, and the only place I could imagine doing it was Bay Head,” she says of the Shore community she adored as a child.

The shop, named for Del Mar, California, opened last summer in a pocket-sized space behind larger buildings, nestled away and hard to find. But find her they did, and by season’s end, her inventory was selling out.

This year, she’s in a much larger shop in the middle of town. “Now I’m in the hub and bustle,” says Dinneen.

She is working with the Hesse Companies, a group of family-owned businesses committed to restoring Sandy-ravaged Bay Head by developing retail spaces—and a new restaurant—to create what they’re calling the Bay Head Hub on Bridge Avenue and along Twilight Lake. “The intent is to offer a friendly and fun place, a communal center for summer residents, day-trippers and year-rounders alike,” says Dinneen. To that end, she’s tucked a bookshop called the Sun Also Rises into a back corner of the store. It’s a  place to pick up a newspaper, a magazine or a beach read. Occasionally, she hosts live music, readings and children’s activities. Plans are under way for a coffee bar and healthy food café.

Dinneen, who lives in Saddle River, relocates her family to Bay Head each summer. “I’ve always had such bad wanderlust, I know I love a place when I never want to go anywhere else.”