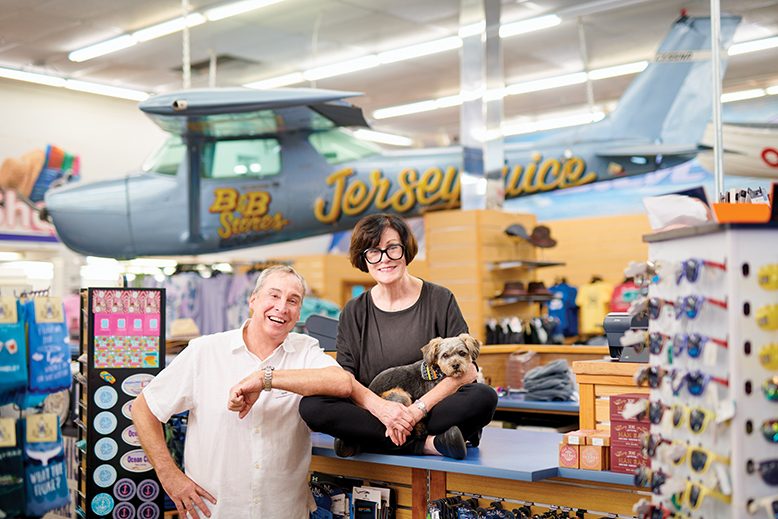 Long before Amazon became the nation’s one-stop shop for everything from clothing to furniture, brick-and-mortar department stores dotted downtowns across the state and the country. Huge conglomerates—department stores like Strawbridge & Clothier, Wanamaker’s, Lit Brothers and Gimbels—seemed invincible. All founded during the Victorian era, these stores began closing in 1977, and by 2006 were all but gone.

Family-owned versions of department stores started popping up in New Jersey in 1952 and continued appearing throughout the state for the next 24 years—right up until the major national players started their downhill slide.

Many of these family-run stores continue to thrive, offering personalized attention and name brands. Prices can range from dirt cheap to do-you-offer-a-senior-discount costly.

The end of the giant department store era saw more than 12,000 major department store closures across the nation. These revered emporiums failed for a variety of reasons, including competition from discount stores.

[RELATED: Finding Joy Between the Racks at Avato’s]

While America’s first department store, Lord & Taylor, founded in 1826, closed the last dozen-plus of its stores on February 27 of this year, it still does a brisk online trade.

Macy’s, established in 1858, not only made the cut when the rest failed, but also purchased some previous competitors. Now, even Macy’s physical presence is insecure, with as many as 125 store closings anticipated by 2023, although its online sales are booming.

For many New Jerseyans, retail chains like Walmart, Target and Kohl’s, all of which opened their first stores in 1962, plus Boscov’s, an East Coast chain that opened in 1914, have become staples. High-end department stores, such as Bloomingdale’s (1861), Saks Fifth Avenue (1867), Nordstrom (1901) and Neiman Marcus (1907), also maintain outposts around the state.

Here are some local department stores that remain family owned today. Bonus: By shopping at these stores, customers are supporting locally owned businesses and keeping them alive. Ted (left) and Marty Resnick are brothers and owners of Flemington Department Store, which their parents launched in 1956. Photo by Dave Moser

Known as “the department store” to locals, this two-story establishment boasts indoor retail space just shy of three acres. That’s quite an accomplishment, considering it all began in a Quakertown chicken coop.

In 1956, Jacob and Sara Resnick, parents of current owners Ted and Marty Resnick, started bringing work shoes and clothing from New York and selling them out of the coop on their family farm to other local farmers. Sales were so brisk that the senior Resnicks were eventually able to buy property on Route 31, where they constructed both their home and the store, which began its life at 22,000 square feet.

Jacob, who fought with Russian partisans during World War II, and Sara, a Holocaust survivor from Poland, met after the war at a displaced persons camp in West Germany. They made their way to the United States and realized the American dream, establishing a business that now has more than 100 employees and a $40 million annual sales volume. 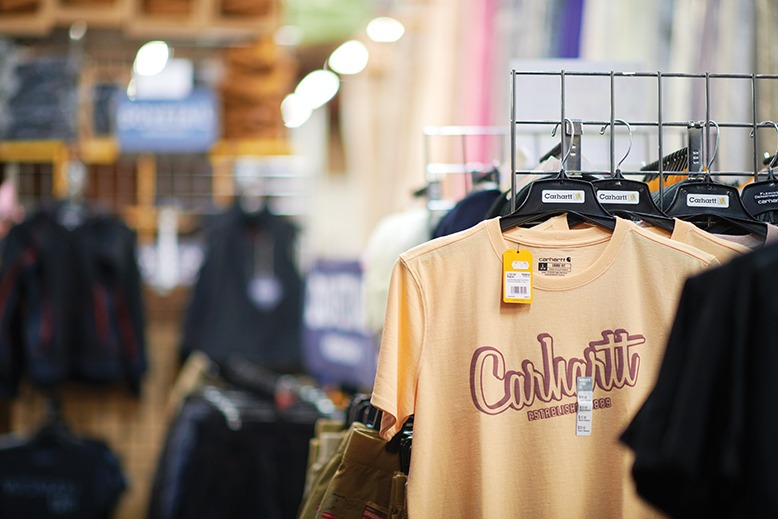 The Resnick family, owners of Flemington Department Store, began by selling work clothes and work shoes out of the family’s chicken coop more than 50 years ago. Photo by Dave Moser

Brothers Ted and Marty credit their success to carrying a substantial and varied inventory of high-quality, up-to-date items (with an emphasis on American-made), including what Marty says is one of the largest selections of work clothes and shoes in the state.

In addition to clothing, the store stocks a wide selection of brand-name furniture (bedroom and dining sets, chairs, and sofas), mattresses, flooring and rugs. Ted is even known as the go-to person for event carpeting, providing white, gold and red carpets for two popes during their visits to the United States, as well as for five American presidents (George W. Bush, Bill Clinton, Barack Obama, Donald Trump and Joe Biden) and for A-list events such as the Rockefeller Center tree-lighting ceremony, the 2018 Grammys, and the Metropolitan Museum of Art galas.

Hand in hand with quality merchandise is customer service, and here, the owners embrace an old-fashioned sentiment: “The customer comes first, second and third,” says Marty. To that end, an owner or family member is available in person at the store at all times, and services such as delivery and setup of furniture—which elsewhere garner substantial upcharges—are free.

Customers return the love. Mother and daughter Rose and Kristin Nastasi of Clinton are regulars. “Over the years, I’ve gotten a lot of my shoes and winter coats here,” says Kristin, a sophomore at the College of the Holy Cross in Massachusetts, who plans to become an attorney. “My mom and I come here because they have better prices for name brands.”

Rose adds, “This store caters to a large age group, employees are very helpful, and the store is good with returns. It’s a great place.”

For boutique owner Kasey Dameo, Flemington Department Store is an opportunity to patronize a fellow independent business. The 23-year-old entreprenuer owns Abovo, a women’s clothing store in nearby Whitehouse Station. “I’m all about small and local,” Dameo says. Flemington Department Store is a favorite spot when she’s shopping for her boyfriend, Cale. “Most of his hats and T-shirts are from here,” she says, “and he has a lot!”

Along with inventory and customer service, the store maintains similar integrity behind the scenes. There is very little staff turnover. Furniture-department manager John Koziel, for one, has been with the store for 37 years. Longtime employees have a vested interest in the business.

To keep expenses down, president and treasurer Greg Mischke says, “We look hard at our overhead, do our own maintenance, and avoid excessive bills.”

Also very important to the store leadership is community involvement. The storekeepers donated $5,000 in clothing and shoes to Hurricane Katrina victims in 2005 and a half-million dollars’ worth of clothing to Mississippi Valley flood victims in 2011. During the pandemic, they allowed Boy Scout troops to hold socially distanced meetings in their warehouse. They also delivered and set up over 100 mattresses and bed frames (all donated by Sealy) for overflow areas at local hospitals.

B & B Department Store “It’s ironic, isn’t it?” says David Coffey, manager of B & B Department Store’s Ocean City location. “What goes around comes around. Big department stores once expanded from Main Street USA to malls. Now most of those big stores are gone, malls are struggling, and customers are shopping once again on Main Street USA.”

B & B proved it’s doing something right when it won the 2021 People’s Choice title of Best Clothing Store in Ocean City, based on a readers poll by the local Sentinel newspaper. Along with clothing, B&B also sells casual shoes for men, women and children; accessories; gifts; and toys.

Helen Bertole, owner of B & B South, which includes four small, year-round department stores—the flagship Ocean City store, as well as ones in Sea Girt, Beach Haven and Ship Bottom—is the widow of B & B cofounder Philip Bertole. B & B North, which split off in 2006, has stores in Lavallette and Seaside Park.

“Online shopping doesn’t affect us at all,” says Bertole. “We’re an experience—a go-to store for many of our customers. Some people come in just to see the two Volkswagen Beetles, Karmann Ghia, old Cessna plane and Ocean City lifeboat hanging from our ceiling, all brought in by my creative husband.”

Gina and Jeff King, who bought their Ocean City vacation house in June of 2019, enjoy the manageable size and interesting finds of B & B.

One afternoon, Jeff quickly found just the casual shirt he was seeking. He was drawn to the store because, he says, “It seems most of the clothing stores along Asbury Avenue cater to women, but B & B has clothing for men.”

Gina, president of Tom Antonelli Inc. HVAC Supplies in Bristol, Pennsylvania, says that she and Jeff, the company’s vice president, enjoy supporting small businesses like B & B.

“We’re a small company ourselves, so we like to give back,” she explains. “People have to support local, small businesses, or else they get eaten up.”

Also shopping that day at B & B’s Ocean City store was Reed Hubbard, a medical device sales leader, who had moved with his wife, Brittena, and their sons, Brandon and Carter, from Egg Harbor Township to Ocean City just two days earlier.

“Yeah, we shop here often,” Reed says of the 47-year-old store. “My parents had a house on the island for 35 years, so we’ve been coming here forever. There are good prices and a good selection. We like to shop small, too.”

Coffey, formerly a manager at Macy’s, believes this 12,000-square-foot store (by far Ocean City’s biggest) continues to be a success due to three factors: “our merchandise mix, our location, and the retail therapy we offer both vacationers and locals.”

A staple located in the central business district of the Heights section of Jersey City, Kennedy is a second-generation, family-owned-and-operated store with president Camelia Guindi and her son, Jimmy Guindi, at the helm.

Jimmy says his parents, Camelia and Joseph, “came to this great country from Aleppo, Syria, in 1970, with just the clothes on their backs.” They were a young couple—Mom in her 20s and Dad in his 30s.

After working several different jobs in the retail industry, with many long hours and seven-day weeks, Joseph used money he had saved up to open a wholesale company. “Which failed,” says Jimmy. But success came in 1974 when, only four years after arriving in the United States, Joseph launched the store, now a family legacy, giving it an Americanized version of his name. Kennedy’s broad inventory includes clothing and accessories, as well as home items like curtains and rugs, plus health and beauty items.

The entire Guindi family participated in the success of the store. “As a family, we all used to help at the store,” says Jimmy, adding: “At 7 years old, we helped stock the shelves on our days off from school.”

Joseph died in 1990, but, says his son, “until this day, our customers come up to me and say things like, ‘I remember your father, he gave me a job. He was a great man. We miss him.’ It’s heartwarming that more than 30 years later, customers still remember him.”

“Central Avenue has become our home away from home,” Jimmy says, “and we continue serving the community with pleasure.”

Barbara Leap is a frequent contributor to New Jersey Monthly.