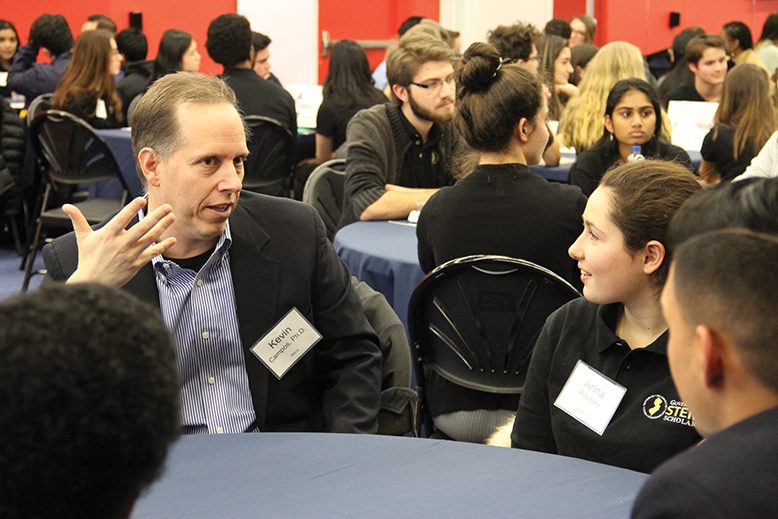 STEM Scholar Anna Prilutsky networks with Kevin Campos, an associate VP at Merck, at the STEM Scholars Industry Conference in February at NJIT. Courtesy of The Research & Development Council of New Jersey

Can New Jersey retain its best and brightest? That’s the essential issue addressed by the Governor’s STEM Scholars, a 5-year-old program focused on inspiring students in the STEM fields—science, technology, engineering and math—and helping them recognize the opportunities for talented and innovative STEM graduates in New Jersey.

The first step is to spread the word about the program to eligible New Jersey students—particularly those in underserved communities. “According to the National Skills Coalition, between 2017 and 2027, the number of STEM jobs will grow by 9 percent in New Jersey,” says Rebecca Lubot, the Governor’s STEM Scholars program director for the council. “These jobs,” she continues, “require scholars to start developing specific skill sets. The STEM Scholars program is working to solve this issue by making the thought leaders of tomorrow aware of career opportunities in government, academia and industry.”

Students in grade 10 through doctoral candidates, who have a 3.5 GPA or above, can apply at govstemscholars.com by June 15 to be considered for the following academic year. Students are required to submit a transcript, and letter of recommendation, share what areas of STEM they are interested in and write a short essay. Applicants are reviewed by academics and private-industry partners with an eye toward leadership potential, diversity in geography and background, and applicant interests.

The scholars selected to participate in the program spend the academic year attending STEM conferences, participating in team-based research projects, and networking with New Jersey STEM professionals, policymakers, educators and researchers. Teachers and industry leaders mentor the undergraduate and graduate students, who in turn mentor the high school students. The research projects are judged at the end of the program; some of the scholars get to brief legislators on their findings at the State House in Trenton.

At this year’s fifth anniversary commencement May 11 at Kean University, diplomas signed by Governor Phil Murphy will be presented to 80 scholars. Senator Cory Booker will deliver a congratulatory video, and the governor has been invited to speak.

NJIT has three scholars in this year’s cohort. “Growing the pipeline that supplies the STEM workforce is essential for economic prosperity,” says NJIT president Joel S. Bloom, Ed.D. “The Governor’s STEM Scholars Program makes an important contribution toward that effort.”

Other industry partners of the program include Janssen Pharmaceutical Companies of Johnson & Johnson; the PSEG Foundation; and Eatontown-based Subcom, a global supplier of undersea communications systems.

Some partners are already seeing the benefits of the program. “The Governor’s STEM Scholars students are making a significant impact in their communities and leading change across New Jersey,” says Barb Short, chief diversity officer, foundation president and senior director of corporate citizenship at PSEG.