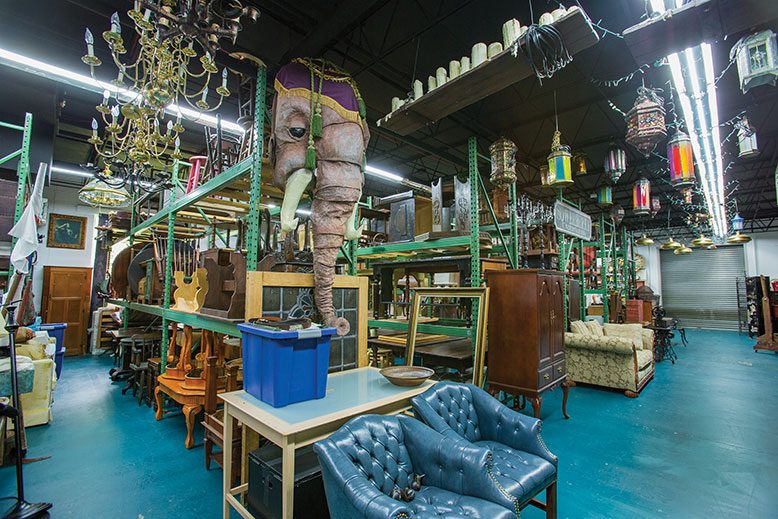 On a recent day in June, the Shakespeare Theatre of New Jersey’s staff hustles about preparing for its upcoming production of Titus Andronicus. The energy is palpable inside the company’s massive Florham Park home, where set design, costume creation and rehearsals proceed apace. Previews begin in three weeks, and there’s still a lot to do.

In the warehouse-like set-design shop, orange and blue sparks fly as technical director Zac Blitz welds the frame for an 18-foot-tall Roman helmet that will serve as a platform on stage.

Down the hallway, calming music plays in the costume shop as stitcher Christina Lockerby feeds what will be a military jacket into her buzzing sewing machine. Her coworkers are buzzing too, constructing harnesses, belts and mock-ups of costumes based on award-winning designer Yao Chen’s sketches, which are pinned to a bulletin board.

Nearby, actor Chris White, who plays Aaron, sits alone at a table outside the rehearsal room practicing his lines aloud in a booming voice. Soon, he’ll join the other actors for scene blocking.

Enthusiasm permeates the 50,000-square-foot facility—a wonderland of creativity for the 55-year-old company. It’s an unlikely presence in this quiet, residential neighborhood. The armouretum is a bizarre storage area where medieval weapons and severed heads coexist with floral props. Photo by Joe Polillio

“When people come here,” says artistic director Bonnie J. Monte, “they feel like they just got a golden ticket to Willy Wonka’s chocolate factory…It is such a magical building in so many ways.”

Indeed, it’s rare to find a rehearsal space, costume shop and set-design studio all under one roof. “There is nothing like this in the American theater scene,” claims Monte, the driving force behind the company for 28 years.

The company was not always charmed. When Monte was hired in 1990, the operation—then the New Jersey Shakespeare Festival—was deep in debt. Its reputation was in the dumps, and its performance space desperately needed renovations.

So why did Monte take the job?

“It’s very difficult to get your own theater,” says Monte, who previously worked at the Manhattan Theatre Club in New York City and the Williamstown Theatre Festival in Massachusetts. “And there’s some advantage to taking over a company that’s in real dire straits.” She could reinvent it with her own vision.

Monte kept the original mission: to produce the works of William Shakespeare and other classics. Each season runs from May to December, typically with seven productions, six on the main stage at Drew University’s F.M. Kirby Shakespeare Theatre and one at the College of Saint Elizabeth’s outdoor stage in Florham Park. The remaining shows in this year’s 56th season are Buried Child (September 19-October 7), Charley’s Aunt (October 24-November 18) and The Winter’s Tale (December 5-30). 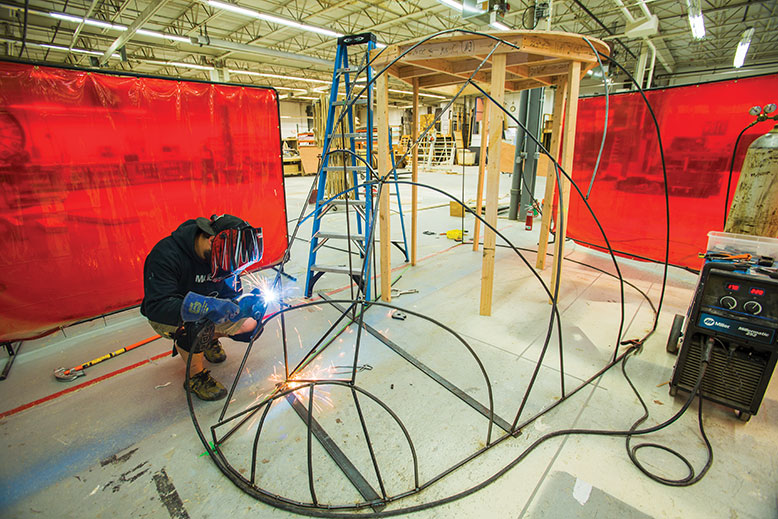 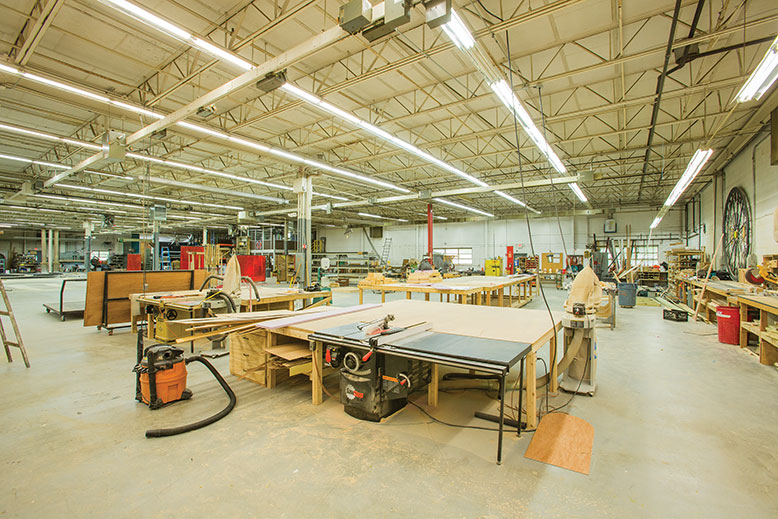 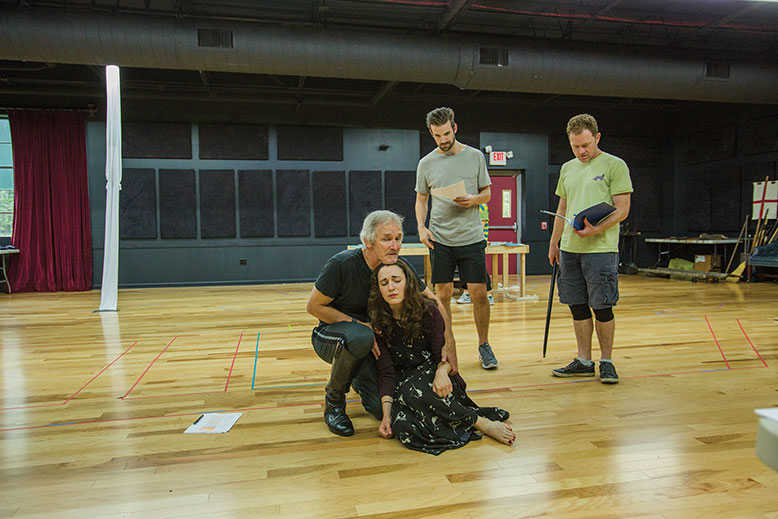 After brief deliberation, the actors snap back into character.


Until 2012, rehearsals were held at the Kirby, and the set- and costume-design departments were located in an Irvington warehouse. Monte needed her staff centralized. Eighty sites were scouted and funds were raised before the company bought and renovated the Florham Park support facility, a former valve factory.

The building itself has been transformed into a work of art, down to the painted pipes. Donors can add flair to the space by sponsoring a playwright’s name on a girder or a character’s name on the Greats Wall. When a large donation comes in, the staff celebrates by ringing a ship’s bell. For the annual spring gala, guests are treated to hors d’oeuvres, a cabaret show and a facility tour.

Touring the building is like stepping into Monte’s imagination.

A blue hallway with shelves of lanterns on the left and ornate mirrors on the right leads to the props inventory. The room resembles an antiques store crammed with neatly arrayed chairs, globes, clocks, books, bookshelves and couches. Chandeliers hang from the ceiling, but it’s the realistic-looking elephant head, used for the 2009 production of Around the World in Eighty Days, that really catches your eye. Nearby, the costume and shoe collections are displayed in two large closets. Organizing the clothing by size, color, production and period is an ongoing project.

The eye-popping sights continue on the Boulevard of Dreams, an 85-foot-long hallway partially decorated with elaborate murals painted by the company’s scenic artists. At the end of the corridor, the Apothicaire de Romeo window—designed by a technical staffer—glows with backlit glass bottles. Even the boardroom, or Think Tank, is a fantasyland. Adjacent to a large conference table is the armouretum, an unusual display of weapons, decapitated heads and other props juxtaposed with fake shrubs and bouquets.

“What you’re seeing when you walk through is actually only about 50 percent of [my] vision,” says Monte. “We still have a punch list of about 500 things.”

The building also hosts the company’s educational endeavors. This summer, 28 acting apprentices and 25 interns participated in the 10-week professional training program offered in all theatrical disciplines for ages 18 and up.

Some acting apprentices audition for Shakespeare Live!, a program supported by the National Endowment for the Arts that’s held during the dark season (January-May). The touring company of 10 non-Equity actors (not yet in the professional actors’ union) performs abridged versions of a drama and a comedy in schools throughout the tristate area.

Director of education Brian B. Crowe began his theater journey as an intern more than 20 years ago. On this day in the rehearsal room, he’s directing Titus Andronicus. Crowe confers in a circle with Rick Sordelet, a Broadway fight director, and several actors. Sordelet is on hand to add realistic choreography to the drama.

“What are the rules to your relationship?” he asks two actors who play brothers. In this scene, they’re quarreling. Then the younger brother pulls out a knife. “Use the blade as punctuation,” says Sordelet as he demonstrates how to maximize the weapon’s dramatic effect. A cabinet of costume renderings preserves the look of past Shakespeare Theatre productions. A glimpse of the women’s clothing-storage area. All items are organized by size, color, production and period. Other theatrical companies can rent the costumes. Stitcher Sarah Ochocki makes alterations to a garment in the costume shop. Across from her, fellow stitcher Christina Lockerby works on a military jacket for actor Bruce Cromer, who plays Titus. Bins of hats and other accessories line the walls of the shop. Crowns hang ingloriously on pegs in the costume shop.

Crowe steps in to explain the scene and the characters’ personalities to Sordelet. They need to amplify the tension but stay true to the text. “We will watch before we listen,” Sordelet reminds the actors about the audience. “Stay in the frame.”

Annually, the company employs 300 theater people. About 30 are full-time employees, 30 are seasonal, and the rest are Equity and non-Equity actors.

While Monte compares the facility to the Willy Wonka factory, she at times is more like the wizard of Oz—revealing what’s behind the curtain.

For the past three years, Monte and development associate Sara Hedgepeth have led a handful of public tours of the facility, including a demonstration, lecture or a glimpse of a rehearsal. To keep up with the demand for a behind-the-scenes look, Monte plans to train staff and volunteers as docents for the tours, which cost $10 for kids and $12 for adults.

“When I said, ‘We’re going to turn this building into basically an interactive museum where people can walk through and watch us work and we explain things to them,’ we were all a bit fearful about that,” she admits. For centuries, there’s been a fear among theater people that showing the process will detract from a show’s magic.

“What we’ve discovered is that it doesn’t diminish [the public’s] awe of what we do at all,” Monte says. “In fact, it massively increases their awe, and they walk away with a whole new sense of wonder and delight.”