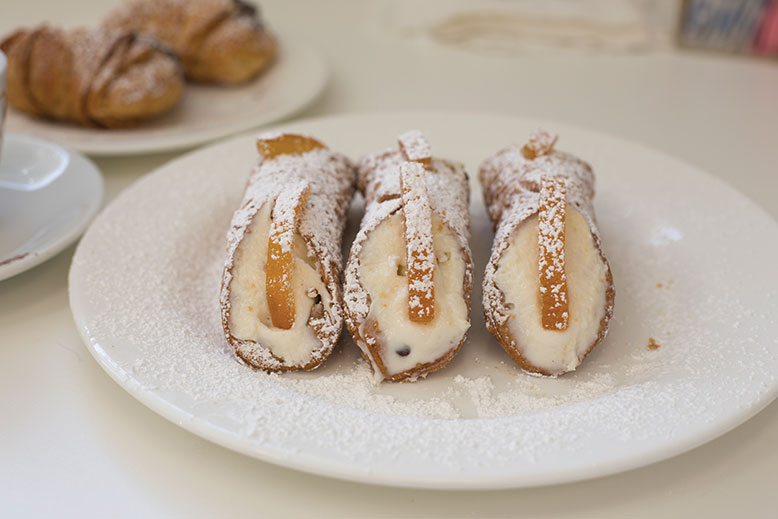 Cannolis from Palazzone 1960 in Wayne. Photo by Laura Baer

Giancarlo Palazzone, 42, named his transcendent Italian bakery, Palazzone 1960, for the year his parents came to America. The daily specials (including fine pastas and panini) are written in Italian, the language in which the staff converse with many of their customers. By transcendent, we mean that the sfogliatella (and its big brother, the lobster tail), so often dense and dull, is here a crisp, thin shell that gives way to a gush of divine pastry cream. Here the cannoli (pictured) taste of fresh ricotta, not just sugar. Then there’s delicate rum babba and tiramisu, crunchy biscotti and nine types of espresso parfaits. We could go on, but see for yourself.—EL
190 Route 23 North, 973-256-2734.

Doughnuts to Die For Curiosity Doughnuts in the Stockton Market. Photo by Paul Bartholomew

Bach or Bartók? It may seem an odd question when the subject is doughnuts, but the analogy, while imperfect, is pertinent. Bach, the classical master; Bartók, the folk-based, brainy modernist. Both, essential and superb. In doughnuts, the summit of classicism is Schnackenberg’s Luncheonette in Hoboken. Its Well-Tempered Clavier opens with the tempered sweetness and rich, dense crumb of its plain cake doughnut and extends into the delicacy of the yeasted kind, generously filled with, say, coffee or Key lime cream. At Curiosity Doughnuts in the Stockton Market, kitchen scientists Alex Talbot and Aki Kamozawa constantly deconstruct and build upon basics, much as Bartók did with Hungarian folk tunes, to create modern masterpieces in pursuit not of sweetness, but of Maximum Flavor, the title of their influential 2013 cookbook. Most of their doughnuts are made with a yeasted vanilla buttermilk batter they developed, producing fluffiness with moisture. Their apple-cider cake doughnut, made with real cider, not concentrate, is topped with cinnamon-cardamom sugar. Their most outrageous creation is the Doughnut Dog, a spiky globe like an undersea mine bristling with embedded pieces of hot dog. It’s dinner and dessert in one.—EL

For a while, there was a “reserved” sign on the booth where Tony Soprano was sitting when the screen cut to black in the final scene of The Sopranos. Now the sign is hidden behind a tabletop jukebox and any foursome can sit there (last booth, center row) and order the onion rings Tony was pondering when he presumably met his maker. “Best in the state, as far as I’m concerned,” opined Tony. Who are we to argue? While you’re there, make it a meal with a grilled Taylor ham and cheese and a vanilla milk shake. “That’s still our most popular,” says Ron Stark, co-owner of the 78-year-old ice cream parlor.—KS
1063 Broad Street, 973-338-7091.

Food of the Gods
Belgian Chocolates at Chocodiem Theobroma, the first word in the scientific name of the tree that produces the cacao pod, means “food of the gods.” After a 22-year career in pharmaceuticals, native Belgian and longtime Jerseyan Jean-Paul Hepp decided to rescue chocolate from insipid sweetness and return it to its ethereal throne. Having a PhD. in biology helped his studies, but so did his Belgian palate, which he calls “my big secret.” Actually, since he launched Chocodiem in Clinton in 2012, Hepp’s palate is a secret no longer. Dessert Professional, a national trade publication, named Chocodiem one of the Top 10 Chocolatiers in North America for 2016. Hepp’s dark chocolate, sweetened with local honey, settles on the palate like a sunset. The hand-painted shells of his truffles are filled with ganache in entrancing flavors such as lavender, prosecco and Guinness. Brilliant, too, are his mendiants, chocolate discs topped with candied fruit and nuts.—EL Greg Kohr grew up squeezing oranges at his family’s frozen custard stand in Seaside Heights. “My father’d give me a dime, and I’d play pinball for a nickel a game and play forever,” he says. Kohr’s grandfather, Elton, was one of four brothers who invented frozen custard in 1919 and made it a Shore sensation. (The pasteurized egg yolk in the cream made it a custard and somehow slowed the melting in the salt air.) Elton went out on his own in 1923. Today, there are several family-related Kohr’s entities. Greg Kohr is president of  Kohr’s the Original, which has six locations in Seaside Heights, Lavallette and Fairfield. They still squeeze fresh oranges to make the orange floats, adding a swirl of the original vanilla custard—thick, smooth, with an almost nutty sweetness. Equally classic is the swirl cone of vanilla custard and orange cream sherbet.—EL

The $3 Masterpiece
Pecan Sticky Bun at Balthazar Bakery in Englewood

You could walk into Balthazar blindfolded, point at random, and know that whichever of its 16 breads and 17 scones, Danish, croissants and other pastries you were handed would be the absolute best of its kind. But there is one we want to single out, because it towers above the typical the way the nearby Palisades tower above the Hudson. That is the pecan sticky bun. The yeasted dough is deeply laminated with butter, rolled up with lots of toasted pecans and golden raisins, and baked very dark to caramelize the brown-sugar honey glaze. “It’s not squishy, not puffy,” says head baker Paula Oland, accurately. “And when you get caramel dark, it leaves the realm of sweetness and takes on a nuttiness that is more interesting. A little salt in the glaze brings that out.” Three dollars. A steal at twice the price.—EL
214 South Dean Street, 201-503 9717.