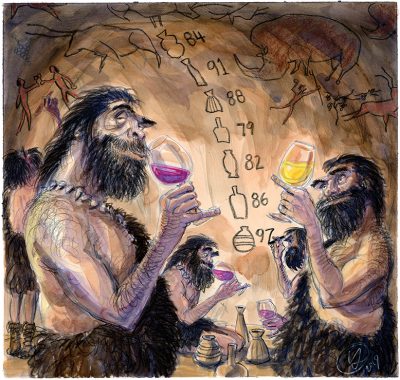 Around 9,000 years ago, a band of nomadic humans roaming around Western Asia stumbled across wild grapes that had fallen into a crack in a rock and fermented. They tasted the cloudy, purple liquid that had oozed out. We’ll never know whether they grunted primordial tasting notes, but the encounter would change the course of human history.

That, at least, is the theory of wine’s origins presented by wine expert John Mahoney in his new book, Wine: The Source of Civilization. Mahoney, a resident of Atlantic County and a former professor of English literature, argues that wine not only predated ancient Egypt, Greece and Rome, but was the catalyst that led to the birth of Western civilization.

He suggests that after the last Ice Age ended, humans got their first taste of wine in its crudest, natural form and were so taken with it that it contributed to them putting down roots, literally and figuratively. Central to his claims are recent chemical analyses of Neolithic pottery, unearthed from archaeological sites in Georgia in the South Caucasus, which found that the pottery, dating from 6,000 BC, contained residues of acids consistent with wine made from grapes.

If the people of ancient Georgia were able to make wine 8,000 years ago, Mahoney speculates, then they must have first encountered naturally fermented grape juice much earlier. He cites evidence of winemaking in Çatal Hüyük, considered the world’s first city, dating to about 7,500 BC, in what is now Turkey. Çatal Hüyük was named a UNESCO World Heritage site in 2012.

While some scholars contend beer was discovered even earlier, perhaps even as long as 15,000 years ago, Mahoney maintains that wine came first by at least 4,000 years. That debate has yet to be resolved.

Mahoney, who calls himself a wine missionary, is the author of six books, including Wine for Intellectuals and Every Bottle Has a Story. He has taught courses on wine at Stockton University and Montclair State University and serves as chancellor of the North American chapter of the Dionysian Society, an international organization devoted to wine appreciation.

“After I wrote Wine for Intellectuals,” he says, “I got into conversations with people about where wine comes from. I found it fascinating that we just assume it came from the Greeks. But research shows that it was much, much older.”

The Phoenicians, he writes, an early maritime civilization, prospered by trading both wine and grape vines, as did the ancient Greeks and Romans. He asserts that societies that made wine, sold it as a commodity, and drank it in moderation were able to amass wealth, expand their political power, and make historic social, economic and cultural advances.

Mahoney argues that the origins of the Christian ritual of the Eucharist can be traced back more than a thousand years before Jesus, when the Greeks drank wine as a symbol of the blood of their gods in a sacrificial rite called eucharista. He notes that drama was invented in ancient Greece as a ritual performed for Dionysus, the god of wine.

Armies such as those led by Alexander the Great were successful in military campaigns, he proposes, because they carried wine, which they mixed with water. The wine served as a disinfectant, preventing fighters from getting sick as they conquered new territories.