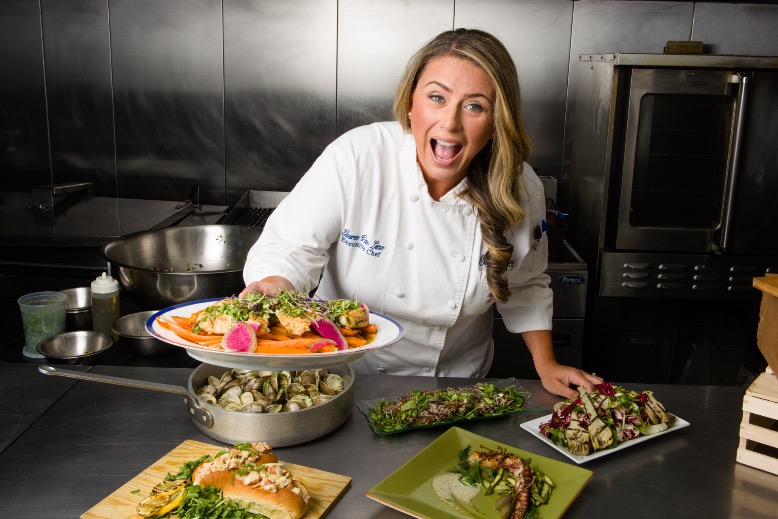 Lauren Van Liew, owner of Chef Covas Catering in Long Branch, has been daydreaming about parties on the Shore this summer—specifically, a welcome-to-the-party ritual she’d like to see take flight. “We would love to have it where people drop their masks in the garbage on the way in,” she says.

Not everybody is ready for that, she realizes. But the two-time Food Network game show champion—she won Chopped in 2016 and Supermarket Stakeout last year—does feel optimistic about the prospect of throwing parties that actually feel like parties again. “A lot of people have already started having get-togethers they weren’t able to have last year, like for birthdays and anniversaries,” she says. “I’m not going to lie and say we had an easy time of it during Covid. But things are picking up.”

Van Liew and her staff of nine specialize in hands-on catering. “I work one-on-one with you to customize everything and take care of every little detail, so it’s all really personal,” she says. If it’s a wedding, she’s not only supervising the serving of the salmon entrées at the reception, she’s also securing the flowers and the goodie bags. If it’s a barbecue, count on her for bibs as well as brisket—locally sourced, when possible, from regular partners like Beyond Organic Farms in Freehold, Lusty Lobster in Atlantic Highlands and Monmouth Meats in Red Bank.

Van Liew, 37, is a New Jersey native and a third-generation serious cook. Her parents, Amy and Al Covas, live in Tinton Falls; when she and her younger sister, Amanda Silva, were growing up, the family lived in Navesink. “We’re a big ethnic-Portuguese family,” she says. Her grandmother, Beatriz Matos, taught the girls how to make traditional Portuguese sweetbreads and soups when she was a kid. If Van Liew wanted one-on-one time with mom Amy, the best option was a hangout in the kitchen.

She loved it there. Just after she graduated Middletown North High School in 2001, Van Liew enrolled at New England Culinary School. That led to an internship at Las Vegas’s famous Bellagio, where she was the only woman in the kitchen and the quickest to be promoted. After culinary school, she landed a job managing the front of the house at Mare Oyster Bar in Boston. Two years after that, in 2007, she was back in New Jersey, working as a catering manager at Rutgers.

[RELATED: A Sunnier Forecast for Dining Down the Shore]

There, “my area was mostly the football team and events, and it was pretty great,” she says. But the urge to try her hand at a restaurant of her own had been tugging at her since childhood. In 2009, she quit Rutgers and opened the Chef’s Place, a New Brunswick diner. “We were a diner on steroids. Everything was homemade, and you didn’t just order French toast, you ordered the Belly Buster, which was brioche bread stuffed with bananas and Nutella, finished with homemade pecan caramel sauce and fresh whipped cream.”

No wonder Bill Van Liew, the bartender, fell in love with her. The couple married in 2012 and moved to Shrewsbury, where they are raising two boys, Logan, 10, and Gavin, 7. When Logan was born in 2010, they brought the baby to work, setting his vibrating chair on the diner’s freezer to soothe him when he got fussy. Ultimately, parenthood and slinging stuffed French toast didn’t mix. In 2012, she closed up shop and started Chef Covas Catering.

Van Liew’s TV stints and a more recent honor—she won the International Gastronomy Academy’s Chef of the Future award this year—are only the most visible proof that the world took notice. The ferocity of the chef shows tends to fit her personality. “I love a great, high-energy competition that keeps everyone on their toes,” she says. “There’s no sugar-coating with me. I’m loud and in your face, and I’m all business in the kitchen.”

Closer to home on the Shore, she has carved a reputation for parties that prioritize fun over fussiness. “Clambakes are huge for us,” she says. “Families will get together on LBI for vacation for a week, and we’ll put the whole thing together—clams, lobsters, stone crab claws. We put newspapers down on the tables and people go to town.” (Depending on the menu, clambakes cost $35 to $125 per person.) Barbecues are big, too. “Our grill cook shows up, and he or she will cook in your backyard for the event so you can actually enjoy the party.” (Barbecue rates range from $18 to $55 per person.)

The crowd doesn’t have to be huge. While the pandemic raged in 2020, Van Liew got creative with her clientele, pivoting to dinners for two delivered to residents of local 55-plus communities. “Those communities are huge, and a lot of times it’s just a husband and wife who don’t want to go to the supermarket or don’t want to cook just for two.” Scaling down was no sweat. “I’ve done parties for eight people and hundreds of people. One of my biggest strengths and weaknesses is that I never say no.”

With the lingering specter of Covid-19, Van Liew’s willingness to take on anything involves adding a layer of caution, especially if the host is anxious. That means tables set farther apart, hand-sanitizer stations and keeping the festivities outside as much as possible. For now, that is. As party season approaches, Van Liew is still dreaming of trash bins brimming with discarded masks, their liberated wearers lining up for cheeseburgers.