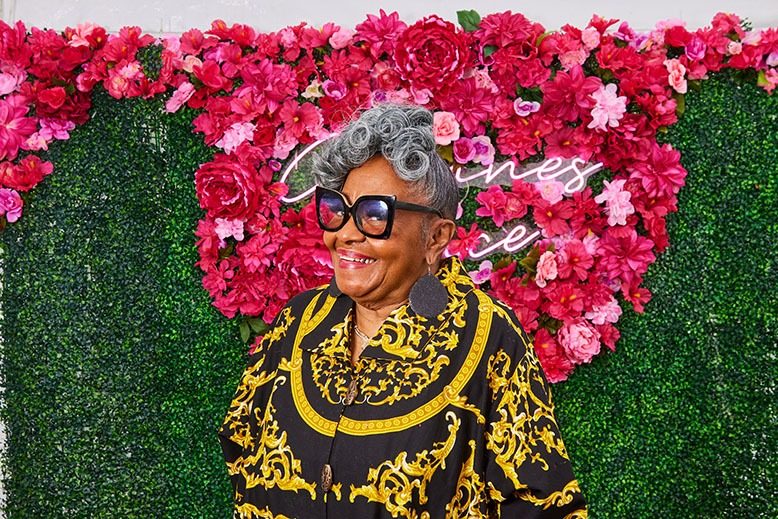 Founder, owner and chef Corinne Bradley-Powers in her finery. “If someone’s in a bad mood,” she says firmly, “food can change that.” Photo by Felicia Peretti

When Corinne Bradley-Powers got the news earlier this year from friends texting congratulations, the name they mentioned did not ring a bell.

“I know James Bradley—that’s my grandfather,” says the 76-year-old, “but James Beard I did not know. People said, ‘You don’t know? It’s the Oscar of food!’ So now I know.”

People in Camden certainly know Corinne’s Place, the storefront eatery Bradley-Powers opened in 1989. This year, it won recognition from the James Beard Foundation (JBF) as one of America’s Classics. Known for its prestigious national awards for chefs, restaurants and hospitality professionals, the JBF created the category in 1998 to honor “food that reflects the character of its community.” Corinne’s Place in Camden has been attracting from Jersey and beyond for over three decades. Photo by Felicia Peretti

Craig LaBan, restaurant critic of the Philadelphia Inquirer, has long been a fan of Corinne’s Place. A cochair of the Beard Foundation’s Mid-Atlantic committee, he refers to her as “the queen of soul food” and labels her fried chicken “unforgettable.” At Corinne’s Place, customers feast on soul food classics Bradley-Powers has perfected, from fried chicken and fried fish to Cajun turkey wings, salmon croquettes and pigs’ feet. On Sundays, they line up for her weekly buffet with its rotating menu. “Cities like Camden don’t often get recognized by the James Beard Awards,” LaBan observes. “I’ve always viewed Corinne’s as a beacon of hope. It’s an excellent restaurant that does everything at the highest level.”

There’s a reason for that. “I compete against myself,” the chef/owner says. “I’m always finding ways to make my dishes even better.”

Making things better was a goal before Bradley-Powers ever tied on a chef’s apron. “I’m always trying to change the world,” she says, “so I got a sociology degree at Rutgers and became a social worker for the Camden County juvenile department. I counseled kids who had gotten into drugs and done all sorts of crimes.

“I made an impact on quite a few,” she adds. “Years later, when I opened the restaurant, I mentored young people who came in, gave them a job. A lot of them don’t have the love we’re used to. So it was my ministry, something I was born to do. “I’m always trying to change the world,” says Bradley-Powers, who has mentored many Camden children over the years. Photo by Felicia Peretti

“While food is my passion, helping these kids is my passion, too. I’d say 95 percent of the kids who started working at Corinne’s when they were, like, 13, 14, are now doctors, lawyers, social workers. So that in itself is rewarding.”

You feel the backbone in what comes next: “And people say nothing good comes out of Camden. I like to think differently. These kids weren’t supposed to make it. But they did.”

Count Governor Phil Murphy among Corinne’s fans. Having eaten there a few times, he has called her place “the best soul food in South Jersey.” He telephoned to congratulate her after she won the Beard Award.

In the heat of July one summer, the governor walked in. She served him her baked chicken and macaroni. “He was so pleasant and appreciative,” she says. Bonus points? Like a true soul food connoisseur, he asked for hot sauce. Another visitor one day had a handsome and very familiar face, though he had never been seen in town before. Bradley-Powers happened to be in Florida; her mother, Fannie Mae Anderson, was running the show.

Mother called daughter. “We think Danny Glover is here,” she whispered into the phone.

“You’ve got to be kidding me,” Bradley-Powers replied.

It was no joke. The actor was making a film in Philadelphia and had been told that the best soul food in Philly was across the river. He returned a second and a third time, for both of which Bradley-Powers was present. By then, the staff knew to bring him out his favorites: the baked chicken and the Cajun turkey wings.

The recipes that fuel Corinne’s Place can be traced back to the days she spent in her home kitchen, watching and later helping her mom. Food built community and also knitted the women of the family together. Bradley-Powers’ father died when she was about a year and a half old and her mother was pregnant with her younger sister. In the kitchen, activity peaked Saturdays and Sundays, when they prepared food for friends, family and congregants at their Pentecostal Church in Camden.

“She’d always have three meats: pork, poultry and a beef,” the chef recalls. “There was cabbage, collards, string beans. Always fresh, never frozen. The aromas! Oh, my God, it was like heaven.”

You can find those tastes at Corinne’s Place. The Beard award brought in new customers, as you might imagine. “At first we were mobbed,” she says. All guests receive the same warm welcome from the staff (including a niece, nephew and, at times, a granddaughter) and from the chef’s husband, Jerry Powers, whose carpentry skills helped build the place.

“We had a few people from New York,” Bradley-Powers says. “But most of the people who come are from out of town. Camden didn’t keep me in business. People from Delaware and Philadelphia come as if it’s just around the corner. Since I started it in 1989, I’ve never paid for advertising. I am really blessed. It’s all just been from, ‘Tell a friend.’”