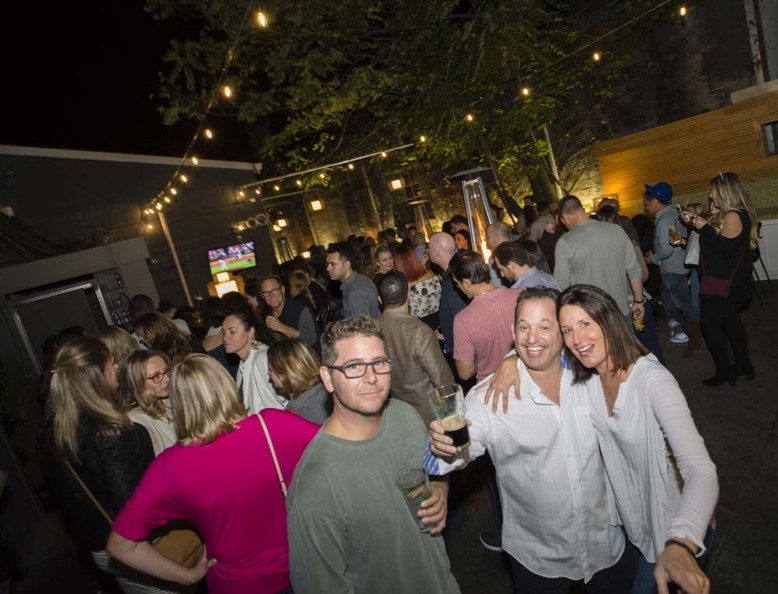 The exterior bar behind the restaurant draws a crowd in warm weather.
Photo by Erik Rank

At 11 pm on a recent Friday, all three bar areas at the Crosby in Montclair were packed with glammed-up young patrons. The dining tables were nearly full as boisterous groups of friends nibbled dishes like the signature pulled-pork totchos (nacho-style tater tots) and gastropub stalwarts like bacon-wrapped stuffed meatloaf and pear and arugula salad.

Outside, on Glenridge Avenue, valets scrambled to deal with a stream of cars lining up at the curb. This is how it’s been every weekend and many weeknights since the restaurant opened in April.

Anyone standing at the Crosby’s large central bar would find it hard to believe this barn-like space used to be stacked with 40-pound bags of chicken feed, shelves laden with cat food and a bakery case filled with homemade dog biscuits. The metamorphosis from humble Montclair Feed and Pet Supply to hip, high-ceilinged restaurant and lounge, complete with outdoor bar, has been remarkable.

It takes a certain determination and vision to transform a pet store into Montclair’s hottest nightspot. Credit Gerry Cerrigone and his partners, Robert Gaccione Jr., Greg Dellermo and chef Michael Juliano, with the savvy to sense not only what the market would bear, but what it would be willing to stand in line for, often in four-inch heels.

Over the last nine years, the team has transformed this single block of Glenridge Avenue into a mini-empire, with spinoffs in nearby towns. Cerrigone and Gaccione began in 2010 by turning an antiques store at the eastern corner into the Italian-themed Saluté Bistro. It took just three weeks for Montclairians to embrace Saluté, according to Cerrigone, who adds, “We were very happy with our first year, and still are very happy there.” One year later, the partners heard the restaurant in the middle of the block might be looking to move. They took it over. “We didn’t have a concept in mind, but we were protecting our investment in Saluté,” Cerrigone says. “The bottom line is, if we didn’t take that space, someone else would have, and there’s no guarantee that space wouldn’t have become an Italian restaurant.” They turned it into Fin, a casual seafood restaurant. (There is now a Fin in Summit and one opening later this year in Long Branch.)
Along the way, Cerrigone and Gaccione also created Salugo Bistro in Verona and another Salugo in East Hanover.

In 2016, the partners decided it was time to try for the Montclair-restaurant holy grail: a liquor license. There was just one available at the time (there are only 12 in existence in the township). It was affiliated with South Park, a bar/restaurant a few blocks away from Fin and Saluté at the corner of Church and South Park streets. Although they never finalized a deal for that space, the partners were able to buy the liquor license for a figure high enough to drive anyone to drink: $1.15-million, still the second highest price paid for a license in town.

Grail in hand, Cerrigone reached out to a coworker he knew from his days at Il Tulipano in Cedar Grove, who happens to own the building where Montclair Feed and Pet Supply was located. “I asked him if he was interested in a different concept in this space,” Cerrigone says. “We met for a beer, and on the back of the napkin the beer was served on, we mapped out the terms of our lease.”

The building offered 8,000 square feet of space, but the clincher was its location next door to Fin. Thanks to New Jersey’s arcane liquor-license laws, if two restaurants share a common area, one license can be used for both establishments. That is why Fin, formerly BYO, and the Crosby now share a common entrance and a kitchen space.

Eighteen months elapsed from napkin deal to doors opening. While most restaurants spend their first few weeks or months in what’s called a soft open, often with little or no publicity, reduced hours and a small menu to allow the staff to work out the kinks, that was not the case with the Crosby.

“I would call our open hard and rough, but only because it was popular from the minute it opened,” Cerrigone says. “It’s Montclair,” he adds. “They are very supportive of their local businesses, and it had been awhile since a restaurant had opened with a liquor license.”

The partners chose the name because they felt it was catchy and timely. “It was my partner Bobby [Gaccione] who came up with it,” Cerrigone says. “We had a bunch of different names in mind, and sent them to a graphic designer to see which ones stood out. It doesn’t really have any meaning behind it. It just seemed to fit.” The view from the sidewalk. When the weather turns nasty, windowed garage doors pull down. Photo by Erik Rank

In creating restaurants, the partners balance knowledge of the market with knowledge of their desired demographic. The one thing they avoid is redundancy. “That’s the wrong approach,” Cerrigone says. In Montclair, he notes, “Egan [& Sons, an Irish pub] does a great job with what they do. Michael [Carrino] over at Pig and the Prince—you can’t touch him as a chef; he’s one of the most talented chefs around. That’s how our menu evolved. What are the people in town doing? Let’s stay away from it.”

The Crosby was designed by Cerrigone, who was inspired by Naples, Florida, and Manhattan’s SoHo, two of his and wife Liz’s favorite spots. The delicately carved wall panels, eclectic tiles and soothing grey tones are balanced by a rustic, industrial feel featuring weathered wood and large decorative garage doors that pull down and double as windows in cold weather. The Crosby’s vaulted, trussed ceiling provides an airy counterpoint to the bustling crowds.

The imposing central bar is the first thing a patron sees when entering. There are two smaller bars: One serves the back part of the restaurant that can be screened off for private events; the other, outdoors, behind the restaurant, takes care of tables that line a shimmeringly lit alley leading back to the street.

The bars offer 40 beers on tap, wines by the glass or bottle and 18 signature cocktails. The bartenders spent much of the summer pouring what they call Frosé, an unexpected breakout hit. Frosé is a baby-pink slushee with a very grown-up ingredient list that includes rosé, gin, elderflower liqueur, cucumber water and watermelon juice.

On an average weekend night, according to Cerrigone, the restaurant easily does an impressive 600 covers (industry-speak for people in seats).

Customers can choose from an eclectic mix of indulgent dishes, such as lobster grilled cheese; fried chicken and waffle sliders with bacon jam; and a large corn dog that comes with stout-caramelized onions, spicy cream cheese and sriracha aioli. For the more abstemious, there are salads, zucchini noodles in red pepper sauce, and a jambalaya made with brown rice, quinoa and barley. The dinner menu offers more than 60 items, but is currently being pared down so the kitchen can produce more consistent fare.

The Crosby draws customers from around the area. The effect on the neighborhood was almost immediate and has made some local residents unhappy. Neal O’Shea has lived on Forest Street, around the corner from the Crosby, for over 20 years. He says the trouble started shortly after the restaurant opened and has created serious quality-of-life issues for neighbors.

“I think it’s just a very poor choice,” he says, “to allow a liquor-serving establishment of that size to open without a parking lot on a residential street.” Referring to the outdoor patio and bar, he adds, “Directly behind that beer garden there is a condo, and those poor people are suffering more than anyone else.” With street parking scarce, the valet line does a brisk business at $10 per car. Photo by Erik Rank

The restaurant, Cerrigone admits, was overwhelmed by its popularity in the beginning. Traffic on Glenridge Avenue (a fairly narrow street, despite its name) was slowed by the increase in cars and an inefficient valet service. Since then, the Crosby has increased the number of valets, and Cerrigone has promised to ensure that the valets will park customers’ cars in the two nearby lots it has arrangements with and not on the residential streets.

The Crosby has also posted signs near the exits that encourage people to be quiet as they leave. Cerrigone acknowledges the issues and says he hopes, within the year, to improve the sound-barrier wall that separates the restaurant from the condominium behind it. In a further effort to control noise, Cerrigone says he does not allow outdoor speakers for music or the outdoor TV and has voluntarily chosen to close the outdoor bar at midnight, one hour before Montclair’s ordinance requires.

Cerrigone feels honored his restaurants have been so successful in town and wants to try to be a good neighbor. “I’m here 10 years,” he says, “so I consider this my neighborhood, too.”

He refers to Montclair residents as “an anomaly,” explaining, “I think the people that live in town are very sophisticated, in a good way. They know good food, good wine and good service.”

Cerrigone appreciates the challenge of serving such a clientele. “It keeps you motivated. If you want to be well received and respected in Montclair, you better know what you’re talking about. You can’t fake your way through this business in this town.”