Dorcas Reilly at Campbell’s in the late 1940s. Courtesy of the Campbell's Soup Company

At Thanksgiving dinner in 2013, my cousins and I were appalled when my grandmother forgot to make green bean casserole, serving broccoli instead. We rushed to the only open grocery store, grabbed the ingredients and saved Thanksgiving.

We are not alone in loving this simple, foolproof dish, invented in Camden by a Campbell’s Soup home economist in 1955. Green bean casserole is still the most requested recipe in company history. Campbell’s estimates that 30 million homes will serve it this Thanksgiving.

Last year, I discovered that the creator of the dish, Dorcas Reilly, now 91, lives in Haddonfield with her husband, Tom, a retired English teacher and Navy veteran. I wrote them a letter, mentioning that she (class of 1947) and I (2014) are both graduates of Drexel University in Philadelphia. I had read about her in the alumni magazine.

The Reillys invited me to visit them. Sitting in their living room, I was struck by what appeared to be a framed American flag hung above their mantel. On closer inspection, it proved to be a poster in which the stripes are represented by rows of red-and-white Campbell’s soup cans. 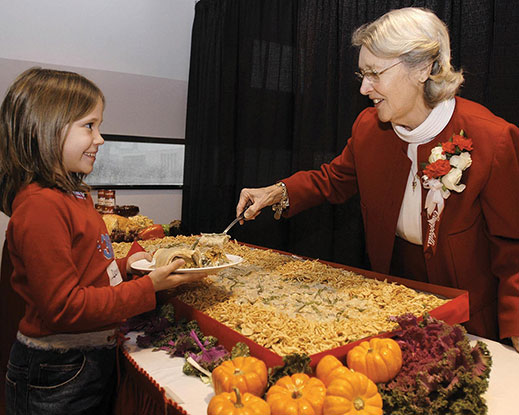 Dorcas Reilly serving her casserole when the recipe was enshrined at the National Inventors Hall of Fame in 2002. Photo courtesy of the Campbell’s Soup Company.

Raised in Camden, Dorcas (Bates) Reilly grew up down the street from Campbell’s headquarters. After graduating from Drexel, she went to work for the local utility company, teaching homemakers how to use the new electric ranges. When Campbell’s revived its home-economics department in 1949, it hired her to develop recipes using Campbell’s products.

The Baby Boom was on, and housewives wanted to put tasty, low-cost, easy-to-make meals on the table. Working at Campbell’s, Reilly told me, “was paradise, really. Everybody was very happy to be inventing new ideas with food.” One of their creations was tomato soup spice cake, which remained popular into the early 1960s.

In 1955, an Associated Press reporter called the company asking for a recipe for a vegetable side dish using common pantry ingredients. Reilly and her team tackled the project.

In addition to fresh and frozen green beans, they tried canned limas, peas, corn and mixed vegetables. But in the end, canned, cut green beans won the internal taste-test derby.

The dish they finally submitted to the AP called for just six ingredients: a can of Campbell’s condensed cream of mushroom soup, a can of French’s french-fried onions, canned green beans (neither made by Campbell’s), plus milk, soy sauce and black pepper.

Reilly called it green bean bake. The AP ran the story nationally, not connected to any holiday.

The breakthrough came in the ’60s, when Campbell’s renamed the dish green bean casserole and put the recipe on the cream of mushroom soup label and in promotional pamphlets.

How Reilly’s creation became a Thanksgiving staple, no one really knows, according to Jane Freiman, director of the Campbell’s test kitchen. “She really developed a gem of a recipe,” Freiman says. “It’s gotten into the fabric of people’s lives.”

I asked Reilly what she considered the secret of its success. “It was very delicious and easy to prepare,” she said, “and it was made with things you already had in your pantry.”

Since that fateful Thanksgiving, I have taken responsibility for making the family’s green bean casserole. I do it proudly.