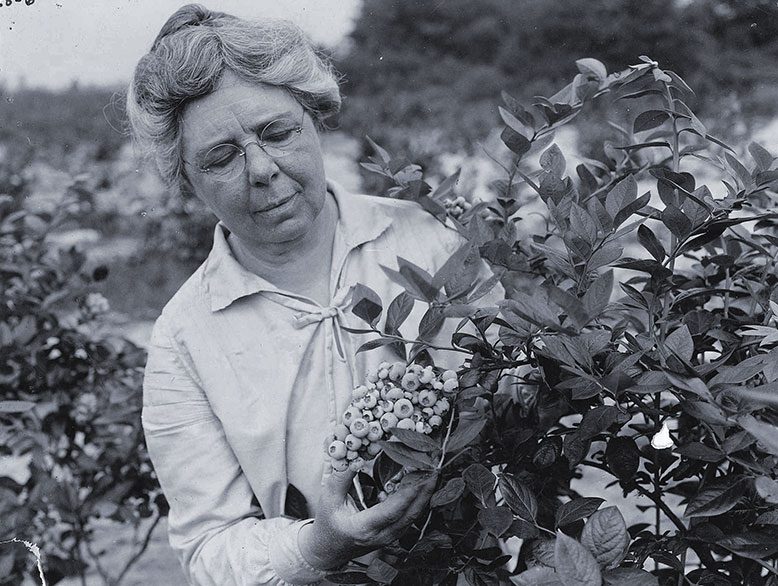 Elizabeth White checks the blueberry crop at Whitesbog, circa 1928. Her experimentation yielded blueberries that were firm enough to market, yet tasteful.
Photo courtesy of The Whitesbog Preservation Trust.

Once upon an American summer, blueberries were a treat you culled from the wild or bought from a roadside stand. Today, blueberries are cultivated all over the world; there is no month of the year when you can’t find them in your local supermarket. That’s thanks largely to the inventiveness and determination of one New Jersey woman, Elizabeth Coleman White, who grew the first commercial blueberry crop 100 years ago on a Pine Barrens cranberry farm.

Elizabeth was the oldest of the four daughters of Joseph J. White. Although he was known as the Cranberry King for his extensive holdings in and around the agricultural village of Whitesbog, White was a man of many talents, a skilled machinist and inventor who held numerous patents. In 1869 he published Cranberry Culture, a guide for growers. That same year, he married Mary Fenwick, whose father, James Fenwick, was himself a notable cranberry grower, thus uniting two South Jersey cranberry dynasties.

As a child, Elizabeth regularly accompanied her father on his trips to the bogs. She was very much her father’s daughter, or perhaps the son he never had. “I always shirked the woman’s job of serving meals and stuck close to my father’s side, eager to hear all the cranberry talk,” Elizabeth told a meeting of the Cranberry Growers Association in 1942. That she was her father’s confidante and apt pupil is clear in further remarks she made to the New Jersey Horticultural Society:

“He taught me to stand with my back to the sun and look in my own shadow to get the best light in which to see and admire the developing buds or berries, how to distinguish the many injurious insects and their work and recognize when the bogs were too wet or too dry. He would explain to me his plans for extensions and improvements and in general made me a comrade in the business.”

At 22, in 1893, Elizabeth began to work for the family operation at Whitesbog during the fall harvest. She was the “bushel man” in charge of the tickets given to pickers to show the quantity of cranberries picked. Later she would take charge of packing and shipping the fruit.

Around this time, Elizabeth discovered her talent for agricultural research. Her father had given her the job of eliminating the voracious cranberry katydid. Elizabeth experimented with a South African fungus culture that was supposed to kill the insects. This aroused the interest of the New Jersey state entomologist, J.B. Smith. After corresponding with Elizabeth, the professor came to work with her at Whitesbog. Together they found the grasses on which the katydids laid their eggs; the solution was to burn the grasses each year. Elizabeth later claimed that this success “inspired a confidence in the possibility of scientific solutions of horticultural problems, without which I never could have undertaken the blueberry work.”

Elizabeth and her father had often talked about the possibility of growing berries. Cranberries (Vaccinium Macrocarpon) and highbush blueberries (Vaccinium Corymbosum) both prosper in the acidic, sandy soil of South Jersey. Blueberries ripen in summer, cranberries in the fall. A blueberry crop would expand the growing season of the farm. Wild berries grew plentifully at Whitesbog on the hummocks between the bogs and in the surrounding woods, but blueberries had proven difficult to tame.

Then, in 1910, Elizabeth came across USDA Bulletin #193, “Experiments in Blueberry Culture,” written by Frederick V. Coville, a chief botanist at the U.S. Department of Agriculture. After reading about Coville’s experiments with blueberry cultivation in New Hampshire, Elizabeth persuaded her father to offer test fields at Whitesbog to the botanist. She would assist with his research. Coville accepted the invitation, and thus began the partnership that culminated in the commercial blueberry.

The Whites signed a contract with the USDA, which gave them the right to half of the propagating material during its four years of testing. At the end of that period, it became the property of J.J. White, Inc.

Coville was not a farmer and Elizabeth was not a scientist. But they were alike in their tenacity and curiosity. Aside from the land, Elizabeth and New Jersey could provide something else Coville needed: superior bushes to hybridize.

Elizabeth—a “true child of the pines and cranberry bogs,” as she called herself—knew the woods and fields around Whitesbog. More importantly, she knew the local people who picked wild blueberries to sell—a key part of the Pine Barrens economy. She printed flyers to enlist local woodsmen to help find the best wild bushes. She furnished each picker with a simple kit: an aluminum gauge for sizing the berries; jars with formalin to preserve the fruit; and wooden plant labels to mark the bushes.
Miss Lizzie, as the pickers called her, paid $1 to $3 for marking any bush that boasted big enough berries, and paid them again to guide her to the bushes.

Elizabeth and her guides traveled the sand roads by horse and buggy. She had the greatest respect for their woodland skills, recalling that in finding herself “in some pathless thicket where all the bushes look alike to me… my guide will say, ‘That there bush was right around here; that’s the tree I broke—there it is now’; and they will show me my little labels, some of them carefully covered up at the base of the stems so that no one may find and move them.”

Bushes were named for their finders: Sam, Grover, Harding, Haines. The best bush of all was found by one Rube Leek. Deciding that neither name would suit a blueberry, Coville and White came up with Rubel.

Elizabeth’s team dug up the chosen bushes and brought them back to Whitesbog, where cuttings were taken and rooted. The most promising were then sent to Coville in Washington, D.C., where he would hybridize them in government greenhouses. When the resulting seedlings were a year old, they would be sent back to Elizabeth’s trial fields at Whitesbog.

In her field notes, Elizabeth was characteristically precise.  She specified the finder of each bush, the appearance of the bush, how roots were cut and planted, and which cuttings were sent to Washington.

As the berries on the bushes that had been returned to her began to ripen, she checked them regularly, noting size, color and growth habit. All were taste tested. Of Haines #9 she wrote: “They have a delicious flavor, and while firm in texture, there is no residue in the mouth after eating them.”

Any of the hundreds of bushes that failed in taste or in other categories—berry size, frost hardiness, ease of picking, keeping quality—were ruthlessly destroyed.
In 1916, the first Whitesbog commercial blueberries—a mix of varieties—were packed in cedar boxes with brown paper coverings; later, Elizabeth would pioneer the use of cellophane.

Elizabeth’s work now turned mainly to the packing and shipping of the berries, and the establishment of a cooperative association of blueberry farmers, Tru Blu Blueberries. She had accomplished her mission for the farm, but she would always look back at the collaborative spirit of those early blueberry experimentation years as a “joyous memory.”

Elizabeth continued to test blueberries and to raise bushes for sale to other growers. Whitesbog’s profits from the berries rose steadily, reaching $31,000 by 1927.

When J.J. White died in 1924, the farm was left as a family corporation run by Frank Chambers, a son-in-law. The previous year, Elizabeth had built herself a house at Whitesbog next to her grandfather Fenwick’s first bog. She designed the cedar-shingle house herself, with a farm office and dispensary for field workers on the first floor and living quarters above. She created around it a garden of native Pine Barrens plants, including a hedge of blueberry bushes.

Elizabeth’s contributions continued through the years. She was the first woman member and subsequently president of the American Cranberry Growers Association. She showed particular interest in the health and welfare of seasonal workers. In 1929, she invited the members of the Council of Women for Home Missions  to run a nursery that would provide care and education for the children of Whitesbog’s migrant workers, hoping to encourage other bog owners to do the same. In 1931, she served on President Herbert Hoover’s Migrant Farm Workers Housing Committee.

Elizabeth never married, but her life was full. Whitesbog remained her home.  She died there in 1954.

Whitesbog was sold to the state of New Jersey in 1967 and is now preserved within Brendan Byrne State Forest. Little is left of Whitesbog’s blueberry fields, but several of the cranberry bogs are still worked by Elizabeth’s great-nephew, Joe Darlington.

In 1920, Elizabeth assured a meeting of the American Pomological Society that “blueberry culture has a great future…. In a few years it will be yielding large revenues from thousands of acres that are now wasteland.”

How right she was, but she probably didn’t realize how many of those acres would be in places like Michigan, Georgia and Oregon. In 2014, New Jersey had 8,800 acres planted with blueberries. In the same year, Michigan had 19,000.

Elizabeth’s work continues at Rutgers University’s Philip E. Marucci Center for Blueberry and Cranberry Research and Extension, set among pines and cranberry bogs in Chatsworth, some 30 miles south of Whitesbog. Blueberries are being bred for qualities needed now, perhaps the most important of which is suitability for mechanical harvesting. In New Jersey, however, blueberries are still a fresh-market crop. The farms employ migrants to pick the berries by hand for sale in consumer markets. Mechanically picked berries, on the other hand, are processed for juice or baked goods.  Mechanical harvesting, says Dr. Mark Ehlenfeldt, a USDA blueberry geneticist, bruises the softer varieties of berry, making them mainly suitable for processing.

To satisfy the huge demand, blueberries are grown not only all over the country, but all over the world. They may be the official state fruit, but their future in New Jersey, with its limited space for agriculture, is uncertain.

Ehlenfeldt thinks blueberries, like apples, could perhaps be sold by variety—some of which have been developed in South Jersey. There are Razz (raspberry overtones), Hannah’s Choice (peachy), and Cara’s Choice, which Ehlenfeldt says is “regarded by some as having the best flavor of any blueberry.”
Elizabeth likely would be delighted.

Perdita Buchan is a freelance writer and the author of Utopia, New Jersey (Rutgers University Press), a study of eight early 20th-century utopian communities. She lives in Ocean Grove.