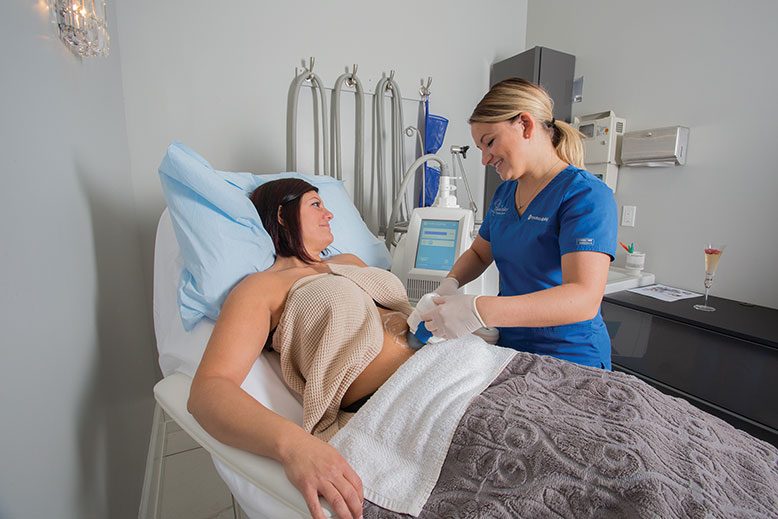 At About Face at Luminous, technician Jessica Carter uses the CoolSculpting machine to treat unwanted fat for her client, Nicole.
Photo by Steve Greer

Heather Hoffman’s clients include reality-show queens Teresa Giudice, of Real Housewives fame, and Jessica Castro, of Married at First Sight. But celebrity word of mouth is not what’s driving business at About Face at Luminous, the medical spa she runs in New Providence along with her Luminous Salon. Instead, she credits clients’ expectation that med-spa treatments provide visible results—and quickly.

Before founding Luminous, Hoffman had been an esthetician—a licensed skin-care specialist—for more than 20 years. Salon clients had been telling her that mere facials, no matter how skillfully done, were no longer the most exciting part of their beauty regimens.

“What they wanted were more aggressive treatments,” says Hoffman. “They were leaving [the salon] to get injections and fillers or a deeper peel. They wanted instant and noninvasive results.” Hoffman, a Union resident, bought the devices that promise such results, hired a medical staff and partnered with Dr. Richard Maggio. They launched the med spa last October. “It was a big investment and very scary,” she says. “But now we can’t stop growing.”

Growth seems to be a given for most New Jersey medical spas. According to Alex Thiersch, director of the American Med Spa Association in Chicago, the Garden State is not alone.

“The industry is going gangbusters,” says Thiersch. Nationally, the business is expected to double in the next two or three years. Technology, population growth, social media and the Internet, he says, are responsible for the growth. “New stuff is being introduced all the time,” says Thiersch. “Laser treatments and injectables like Dysport and Botox are obviously very effective.”

Unlike traditional spas, medical spas are legally required to have at least one doctor on staff. Any med spa should be willing to provide the credentials of their medical staff.

Requirements for performing med-spa procedures differ from state to state; New Jersey’s regulations are among the toughest, says Thiersch. For example, in New Jersey, you must be a physician to fire up a laser for aesthetic skin treatments. On the other hand, fillers and Botox injections can be administered by physician assistants or nurse practitioners as well as medical doctors.

If you are accustomed to a traditional spa, don’t let the med spa’s lack of fluffy robes, candlelit rooms or new-age music deter you. Most don’t bother trying to heighten the senses—whether through aromatic oils or Enya. Paper gowns and the nose-prickling scent of rubbing alcohol are more their speed. They may lack creature comforts, but many of their procedures promise rapid-fire transformations. Clients who come in obsessed with the 11s on their foreheads, their post-baby muffin tops, or any number of other confidence-crushing physical imperfections often walk out looking, and feeling, better.

Here is a look at seven med spas located around New Jersey and some of the skin and body contouring technologies their clients crave.

Bella Derma Medi Spa, Toms River
This mecca for glowing skin hybridizes traditional spa ambiance with medical spa gravity. Ultherapy—a treatment that uses ultrasound energy to lift, tighten and tone loose skin on the neck, chin, brow, cheeks, jawline and décolletage—is among the most popular services, says executive director Jeff Monte. The technology is relatively new; its results are said to unfold over the course of two to three months, with some patients noticing continued improvement for up to six months. How long the treatment effects last vary by patient (prices vary). Standard injectables like Juvederm are also on the menu here, and peels, including glycolic acid, salicylic acid and their signature Lactic Bright peel (each $110) keep South Jersey’s complexion-conscious coming back for more.
1430 Hooper Road, Suite 204, 732-281-3303

Hazen Medical Spa, Princeton
Dr. Jill Hazen has been practicing plastic and reconstructive surgery in Princeton for 20 years. While maintaining her separate medical practice, she entered the med-spa business four years ago when she recognized that patients were looking for options other than surgery. Two-thirds of the procedures at Hazen Medical Spa involve body sculpting, says manager Jody Carafa. That includes targeted inch-loss through procedures like Sculpsure, a laser treatment for fat reduction in the abdomen, flanks, inner and outer thighs and the bra area. Each treatment (some clients need several, at a cost of around $800 per cycle) lasts 25 minutes and is meant to remove 24 percent of fat in the target area. Results are usually visible in around six months, but may be seen in as little as three, sasys Carafa. Skin tightening through radiofrequency energy is a Hazen specialty. The procedure is said to stimulate collagen production. Results can last years, says Carafa.
10 Forrestal Road South, 609-452-0246

The Spa at Mecca, Fairfield
The key to keeping clients happy at this 9-year-old med spa is careful listening, says Camille Lozito, the spa manager. “Dr. Dena Lacara and Dr. Rosalie Curreri take the time to hear what a patient wants to achieve and what her budget is,” says Lozito. “They tailor everything to what they hear during a thorough evaluation.” The doctors perform services that include laser hair removal and injectables such as Botox and dermal fillers. Mecca also offers LiLa Body Contouring (similar to CoolSculpting). As a bonus, the doctors oversee a medically supervised weight-loss program. They guide a client’s path to losing pounds and inches. It’s among the spa’s most popular services, Lozito says. Prices vary.
333 Route 46 West, 973-943-4300

About Face at Luminous, New Providence
Heather Hoffman, the celebrity magnet and longtime aesthetician, says it hasn’t been necessary to market her CoolSculpting service. “People just walk in off the street asking for it,” she claims. CoolSculpting is not for weight loss, but for blasting stubborn fat from areas where it’s especially unwanted, like the lower abdomen. The process involves freezing fat cells, which eliminates them. Permanently and painlessly. For some parts of the body, such as upper arms, only a single treatment is required. A gel pad and applicator are applied to the stubborn fatty area, and the CoolSculpting machine does its business in 35 minutes. Prices start at $750 for a small fat-freezing session; a typical stomach CoolSculpt session runs $1,500, Hoffman says, adding there are discounts when clients buy more than one application.
592 Central Avenue, 908-464-8208

The Peer Group, Florham Park
This sprawling business, with four doctors on staff, is a pioneer in the relatively new world of med spas, having opened its skin care center in 1995. Its focus is on long-term maintenance of glowing, line-free skin. Repeat visits are key. “I’ve seen people who have been coming a full 10 years for skincare maintenance,” says manager Denise Manetti. Services include micro-needling, a collagen-boosting procedure that uses needles to stimulate collagen production, and injectables. Clients can start their journey to glowing skin with the Peer Group’s new-ish HydraFacials, which use a special wand to resurface the skin in a 30-minute, customized treatment (around $200). “They’re huge right now,” says Manetti.
124 Columbia Turnpike, 973-532-5104

Reflections Center For Cosmetic Medicine, Livingston and Martinsville
Unlike most other med spas, Reflections offers minimally invasive surgical procedures (such as liposuction, lift implants and other forms of cosmetic surgery) in addition to noninvasive and nonsurgical procedures. Among the latter, Reflections offers some of the latest, coolest treatments, such as vampire facials. Those who follow the Kardashians know that these treatments, also called PRP facials, involve the drawing of blood and the reintroduction of your own plasma to kick collagen and elastin into action ($800 for a full face). But Jenn Peterson, director of marketing at Reflections, acknowledges that vampire facials are faddish. “We’ve found radiofrequency micro-needling to be more effective because the microneedles are heated and work deeper within the skin,” she says. Other popular treatments include skin tightening via lasers or radiofrequency. Ask for VelaShape, which starts at $250, Exilis Ultra 360, $400 and up or Thermage with a starting price of $1,700 will each target one area of the body, such as post-baby tummy. On the surgical side, Brazilian butt lifts, done under local anesthesia, start at $8,500.
299 E. Northville Road, Livingston, 866-665-3397; 1924 Washington Valley Road, Martinsville, 888-653-8701

A Medical Spa at Rizzieri, Moorestown
A Medical Spa at Rizzieri’s location inside the Moorestown Mall entices shoppers to explore the idea of better skin and thicker hair. The mother-son duo of Dr. Donna Wilcox and Dr. Demetri Karanzalis oversees a team of five aestheticians. Manager Andrea Gambino says Karanzalis has earned a reputation as a master injector, meaning he’s especially skilled at placing fillers like Restylane and wrinkle-removers like Botox strategically beneath the skin. Dr. Karanzalis use micro-needling on the scalp to stimulate hair re-growth (around $1,500). “It may not last forever, but if you’re going to lose your hair next week,” says Gambino, “we can probably help you keep it till next year.”
Moorsetown Mall, Suite 1440, 400 Route 38, 856-985-8500