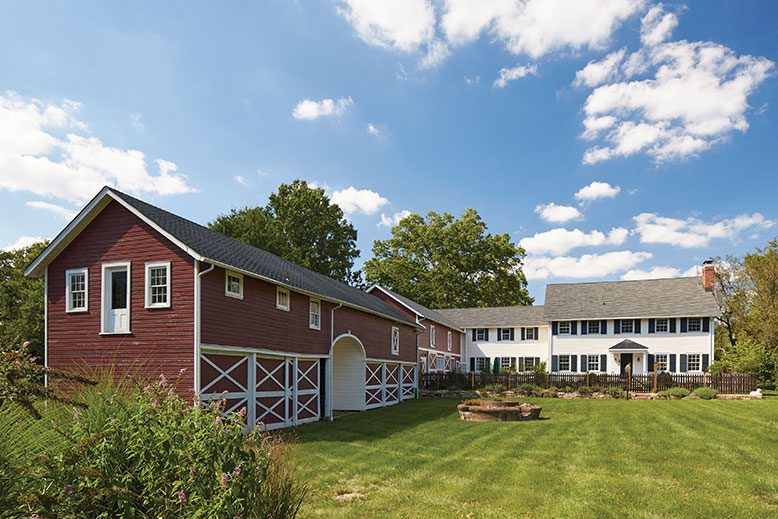 Architect Susan Rochelle connected the buildings, relocating the garage to the rear of the barn. An original horse trough, circa 1850, remains.
Photo by Laura Moss

Caroline and William Symington relocated from the U.K. to the United States more than 20 years ago but—from their refined accents to their afternoon tea—the couple keeps their British traditions intact. It’s no surprise then, that they aimed to create a proper but casual English-style farmhouse when renovating their Bedminster home.

After 12 years in Connecticut, the Symingtons moved to New Jersey with their four daughters (now all grown). “We were looking for two things when my office relocated,” explains William, who works in the pharmaceutical business. “We wanted something more rural, and we wanted a project.” The couple lucked out finding this barn and farmhouse located on five acres—ample land for Zuri, their border collie, to romp, with plenty of open areas to garden and entertain, and a home in need of renovation.

The barn dates to the 1850s and had fallen into disrepair. The house was built about 100 years later, and while livable, was sorely outdated. “It was all very 1960s,” says Caroline.

In addition to updating, the Symingtons wanted to connect the two separate structures, move the front-facing garage to the rear, and, importantly, add more bedroom space upstairs, providing a separate room for each daughter. “We wanted to make it a comfortable family home,” adds Caroline. “Our children live all over the world, so they don’t just come for a weekend, they come for a week. It was really important that they didn’t feel like guests in their own home.”

After developing a preliminary design concept, the couple scouted the Internet and were drawn to Susan Rochelle, an architect located in nearby Alexandria Township. “We had some ideas and she built it from there,” says William.

The design phase took a solid year. Plans were made to relocate the garage entrance to the back of the barn, making the street view more welcoming. To connect the two buildings, Rochelle designed a wide entry hall for the ground floor with a spacious master suite above it. Four bedrooms were created from what had been dark, cramped, chopped-up space on the second floor. The formal dining room, living room and sitting room were updated. Only the kitchen remained intact. “This is a working kitchen, not a showcase kitchen,” says Caroline.
Materials were selected to maintain the old farmhouse feel, including stone flooring and reclaimed wood beams. “It’s an old body with a new frame,” says Caroline.

With the design eventually settled, the Symingtons turned to Susan’s husband, Phil, a builder. “It was a happy chain of events,” says William. “We looked at several builders, and we believe we made a very good decision with Phil.”

The Symingtons stayed put in the house through nearly two years of construction. “There were moments when it was very dirty and dusty,” Caroline says. “But we’re all still talking, so that says something.”

The couple furnished the home with pieces they had collected over the years. “Our furnishings tend to be things handed down from our family for generations,” says Caroline. Never mind that some fabrics are worn and sofas are lumpy. “We like that things are a bit quirky,” she adds.

The Symingtons are particularly proud of the exterior spaces. Avid gardeners, they created distinct spaces with flowers and vegetables. Nothing requires much maintenance. “We love gardening, but we’re very keen that the garden wasn’t going to take over our lives,” says Caroline. “We’ve tried to make it so that there’s a bit of maintenance, but it isn’t crazy.” Importantly, she adds, “the gardens are a haven for wildlife.” Much of the property is not mowed regularly, and everything is chemicalfree. “We’re trying to help the insect population,” she says. The untended milkweed field just off the back patio attracts caterpillars that eventually become monarch butterflies. “Monarch butterflies are endangered,” says William. “The milkweed is terribly important.” The couple also keeps chickens—up to six at a time—for fresh eggs. The chickens have their own coops, but often wander around the patio, joining the Symingtons during tea.

The Symingtons’ other love is entertaining. The north-facing back patio is the gathering spot for family, friends and neighbors during the hot summer months. When the weather cools, the Symingtons serve winter cocktails on the south-facing front patio, protected on three sides in an alcove, prior to moving inside for dinner.

“We have quite a lot of people who come to stay since our family and friends are spread all over,” says Caroline. “And now we’ve got friends from the neighborhood.” Like the house, backyard gatherings are a quirky blend of proper British and homey casual. “It’s British-style entertaining,” says Caroline, who shares cooking duties with William. “We’re very casual, but we always sit down at a table.”