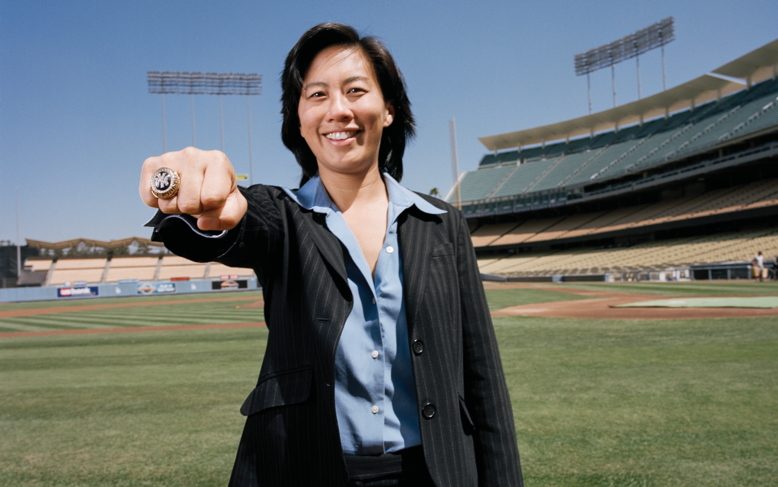 Kim Ng loves to reminisce about the 1998 New York Yankees. The Ridgewood native won a World Series ring as the team’s assistant general manager that year. These days, Ng works in the commissioner’s office alongside Joe Torre, who managed the ’98 Yanks. As senior vice president of baseball operations, the 49-year-old Ng is the highest-ranking woman in the sport.

Ng (pronounced Ang) joined the Yankees in March 1998 after working for the American League as director of waivers and records. Then 29, she was the youngest assistant GM in the majors; she remains one of only three women to hold that job. The Yankees won 114 games in her rookie year, the first of three consecutive championship seasons.

“Every time I talk about that team, a smile comes to my face,” says Ng. “Not one player on that team hit 30 home runs, so it was really a team effort. It was incredible.”

Ng grew up a Yankees fan. She and her four sisters played several sports, including softball, at Ridgewood High School. After earning a degree in public policy from the University of Chicago, she landed an internship, and later a job, with the Chicago White Sox. In 1995, Ng became the youngest person and first woman to present an arbitration case.

She served with the Yankees until 2002, then joined the Los Angeles Dodgers as vice president and assistant GM, crossing paths again with Torre, who was named the Dodgers’ manager in 2008.

“I always heard about him being a great player’s manager,” says Ng. “But I don’t think I truly had an understanding of what that meant until I actually started working for him. He’s incredibly positive, he encourages you, he pushes you to branch out, and he really tries to give you the freedom that you need to work your job effectively and well.”

Ng came back to New York in 2011 to work with Torre at Major League Baseball. As senior VP of baseball operations, she spends much of her time in Latin America overseeing international operations and talent development.

Despite Ng’s rise, she still faces the challenges of being a woman in the sports industry. “If I go to a new ballpark where they don’t know me, I might have a credential on and the guy next to me doesn’t, but the guy will be allowed to pass and I won’t—just because I’m a woman.”

There is much speculation that Ng could one day become the first female general manager in the major leagues.

“I’ve certainly accomplished quite a bit,” says Ng. “But I would say that my career would be absolutely complete if I were to ever get that chance.”