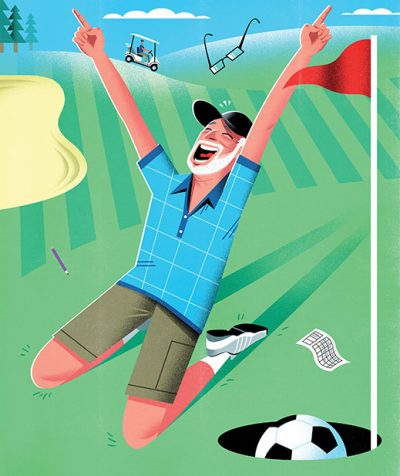 What the heck is foot golf? Quite simply, it’s golf with a soccer ball. Sounds easy, right? Read on.

Foot golf is played across 18 holes laid out along a standard golf course. I tried the Cascades course at Crystal Springs, the sprawling resort in rural northwestern New Jersey. The tee boxes (where each hole starts) and the holes (the target) are located at the edges of the golf fairways. The holes range from a 54-yard par 3 to a 280-yard par 5. A round costs $20-$35, depending on the day of the week. The course supplies the soccer ball ($5), or you can bring your own; no other equipment is needed. You can rent a golf cart ($10), but for my first foray into foot golf, I chose to walk. Golf shoes are ill-advised; comfortable running or walking shoes work better.

Kicking off on the first tee, I immediately learned several key points. Lesson 1: It’s not easy to kick a soccer ball very far or very straight. A player with actual soccer skills and young legs could likely defy that observation. I have neither. My kicks scooted rather than soared. Then again, kicking for distance isn’t all that important. The real challenge is getting the contours of the undulating fairways to work in your favor. You get better at this as you go.

Lesson 2: Unlike a golf ball, which slows as it rolls, a soccer ball tends to pick up speed under the spell of gravity, especially if it’s heading downhill. It keeps rolling. And rolling. And often in the wrong direction.

The first hole at Cascades is a par 4—meaning you should able to sink the ball in four kicks. My third kick put me tantalizingly close to the hole (a bucket in the ground, 21 inches in diameter). That’s when I learned lesson 3: Soccer balls don’t make the subtle, thrilling turns of golf putts. I settled for a five.

For maximum laughter, foot golf should be played in a friendly foursome. It can also be played by large groups—as a corporate team-building exercise, for example. I went it alone, laughing aloud at errant kicks. On hole 3, I booted the ball past the hole three times before a toe tap put it in the bucket. But by hole 4, I started to show some finesse and managed my first birdie, finishing the par-5 hole with four well-placed kicks.

On hole 7, I rolled a long downhill kick into the cup for another birdie. For this, I was rewarded with a steep, exhausting hike to hole 8. By the end of 9 holes—halfway through the round—my score was 38, or five kicks over par.

I was pleased—but my score likely paled in comparison to the professionals. Yes, foot golf has pros. They compete in tournaments all over the United States under the auspices of the American Foot Golf League. There’s also an international organization. In fact, the game was officially launched in the Netherlands in 2008. Today, there are more than 500 U.S. courses, including six in New Jersey. (Crystal Springs also has a 9-hole course at its Minerals resort.)

After hole 11, there was another long uphill walk. At 14, my putts repeatedly zipped past the hole—treacherously positioned atop a domed hill—and skittered down the opposite slope. I managed a par on 16 with a brilliant uphill approach shot, then botched the final two holes and finished with an underwhelming 85 on the par-70 course.

The round took just under two hours and—according to my activity app—covered close to 6,500 steps. I did not count the laughs.