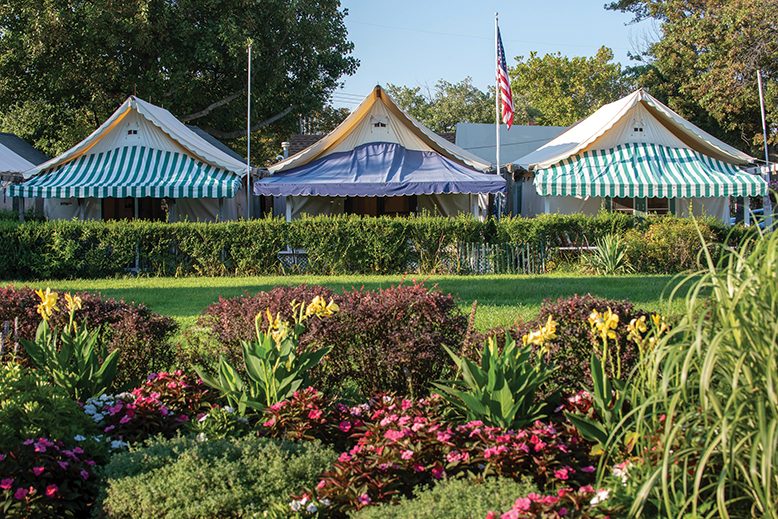 Jenifer Green-Grigg was baptized in the Great Auditorium and has summered in a tent house for 45 years—almost her entire adult life. She lives in nearby Spring Lake but moves to her tent each summer with her husband and 14-year-old son. All three sleep in the same canvas-covered room.

“Sleeping in the tent is magical,” says Green-Grigg. “When it rains, you can hear the rain, and we can hear the ocean.” Green-Grigg’s extended family also spends summers in the tent city: Her parents are at 1 Mount Zion Way, her grandparents at number 3, and her aunt at number 5. Her brother’s tent house is around the corner. When Green-Grigg was young and relatives came to visit, two families—eight people in all—squeezed into one tent. 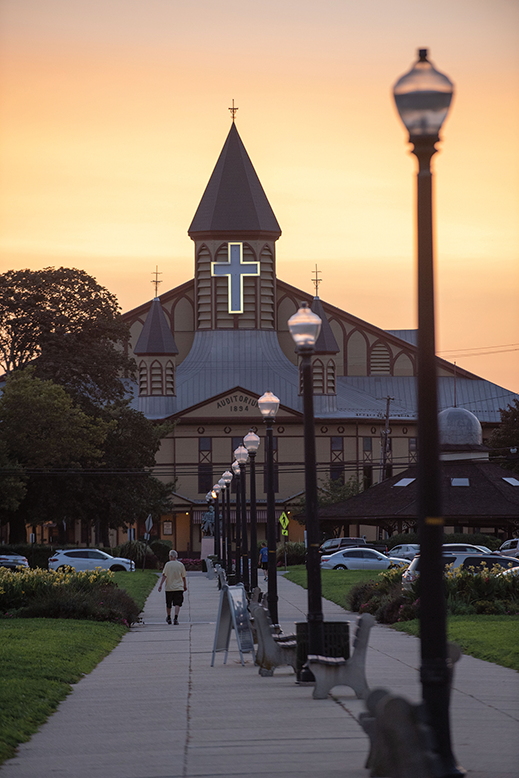 Sunset illuminates the sky above the Great Auditorium.

For more than 100 years, generations of families have spent summers relaxing, attending church and Bible studies, and reconnecting with family and friends at Ocean Grove’s tent city, a unique complex of tiny residences clustered into several square blocks of this unincorporated Monmouth County community within Neptune Township. Largely used by seasonal congregants, the tents fan out from three sides of the Great Auditorium—a 6,250-seat gathering place for religious services, speakers and concerts. The building is separated from the Ocean Grove beaches by a three-block swath of lawn that funnels the morning sunlight onto the auditorium’s yellow-shingled facade and striped awnings.

Each of the tent homes is constructed on a wooden platform, the largest being about 13 feet by 18 feet. On the platform, a permanent wooden structure called a cabin houses the kitchen and bathroom. A canvas section pops out during the summer to create a living room or bedroom. In front of the canvas section juts a narrow porch, often covered by an awning. During the summer, ferns, petunias, and impatiens adorn the front porches. American flags are a common sight. Come Labor Day, the residents take down the plants and close the tents for the season, leaving just a platform, the wooden cabin (used as an off-season storage shed) and a couple of wooden poles out front.

The tents are just one of the unique features that draw people to Ocean Grove. The inclusive community’s 19th-century charm is a magnet for a diverse colony of artists and other creative types, who in recent decades have been gobbling up Ocean Grove’s cozy, gingerbread-trimmed homes. Their decidedly 21st-century influence has not changed the town’s religious character. The Ocean Grove Camp Meeting Association, a Methodist group, still owns the land and grants homebuyers 99-year renewable leases on their property. Tent inhabitants do not have to be Methodist, but they do have to support the association’s spiritual mission.

A group of Methodists in search of a seaside location for worship founded the town shortly after the Civil War. They appreciated that their new community was relatively free of mosquitoes, a concern because of outbreaks of malaria and yellow fever at the time. The Ocean Grove Camp Meeting Association was formed in 1869; the Great Auditorium was completed in 1894. Over the years, dignitaries such as Ulysses S. Grant visited the Great Auditorium; other presidents, including Theodore Roosevelt, Woodrow Wilson and Richard Nixon, have spoken there. It also serves as a music venue, hosting acts as eclectic as Peter, Paul and Mary; a Queen tribute band; and contemporary Christian star Matthew West.

“It was built to help people heal after the Civil War,” says Green-Grigg’s father, Jack Green, a local developer, Great Auditorium usher for 50 years and a Camp Meeting Association trustee. He has fond memories of childhood here. “There were no cars anywhere,” he recalls. “You couldn’t even see a car. But that all changed in the 1970s, when the town was forced to open its gates to cars and join the 20th century.” Contrasts abound. Church bells play inspirational music, and ushers dress in blue blazers and white pants for Sunday services at the Great Auditorium. Three blocks away, sunbathers lounge on the beach. For the Fourth of July parade, the Ladies Auxiliary, a church group, marches in red shirts and white shorts with flags and banners promoting their plant sale and ice cream social. Not far behind, a car draped in a rainbow flag carries members of Ocean Grove United, a local LGBT group.

Yet Ocean Grove remains a quiet oasis. Neighboring Asbury Park draws crowds with its bars, restaurants and music venues. Ocean Grove is a dry town; day-trippers tend to be families with children. 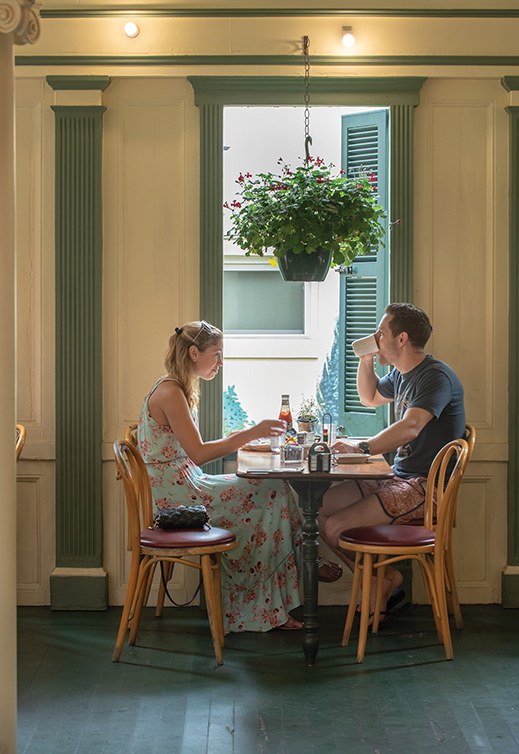 Arnold Teixeira, a longtime resident and owner of the Starving Artist (47 Olin Street), a popular breakfast and lunch spot, says those who go to Asbury Park tend to stay there—although they might take a quick peek across Lake Wesley at Ocean Grove.

“They walk over the bridge,” says Teixeira, “and they say, ‘Ooh, how cute,’ and then they go back to Asbury Park.” Other local business owners thank Asbury Park for bringing more people to the area. “Our weekends were busy both years,” says Barbara Eisel, who for the past two summers has owned the 19-room Bath Avenue Guest House (37 Bath Avenue), a B&B two blocks from the Ocean Grove beach. “Now,” she says, “I’m seeing business during the week. It’s just nonstop.” She says many guests stay for a night to see a show at the Stone Pony or the Convention Center in Asbury Park.

Others come for the gentle delights of Ocean Grove. “You feel like you’re in Mayberry,” says Eisel. “Everybody is so friendly. It just cracks me up.”

Eisel’s partner, Sandra Carioti, who worked in institutional bond sales on Wall Street before buying the bed and breakfast with Eisel, says she appreciates the proximity of Asbury’s nightlife. “And then,” she says, “you can leave it behind, sit quietly on this porch, look at the ocean and get the breeze.”

Laura Massaro, co-owner and co-manager of the Laingdon Hotel (8 Ocean Avenue) just across from the beach, says visitors like the quiet and noncommercial boardwalk. She notes that the town’s beach was listed among the world’s 15 Best Beaches in Fodor’s guide for 2014, along with locations like Cartagena, Corfu, Corsica and Belize.

“We have definitely benefited from Asbury’s popularity,” says Massaro, who is also a Realtor for Re/Max Gateway. She refers to the two towns as “innocence and decadence.” No explanation required.

Asbury Park’s vibrant restaurant scene leaves its neighbor in the dust, but Ocean Grove is not without its downtown options, however quaint. Pear trees, wrought-iron lampposts and a clock tower punctuate the commercial district, a two-block stretch of Main Avenue. Here you can get seafood, steaks and chops at SeaGrass (68 Main Avenue), or pizza at Osteria Procaccini (50 Main Avenue). For something sweet, there’s the Ocean Grove Bake Shoppe (55 Main Avenue) and Ocean Freeze Shaved Ice (56 Main Avenue); for a pick-me-up, there’s Odyssey Coffee (50 Main Avenue). If you’re heading to the beach, you can pick up a baguette, cheese and olives at Cheese on Main (53 Main Avenue), or stop by Ocean Grove Hardware (51 Main Avenue) to rent a bike or buy a pail, shovel and flippers.

But while Ocean Grove is a hive of activity in the summer, it’s all but dead in the winter—so much so that Teixeira now shuts his restaurant for the month of January.

It wasn’t always this way. Lately, he says, escalating property taxes have pushed people out in waves. On one block of 10 homes, four full-time residents sold in the last three years to New Yorkers who wanted second homes. Some longtime residents fear an ongoing tax assessment will result in another tax hike.

“I have a feeling,” says Teixeira, “that any of the people who have been here very long, that held on—this will be what pushes them out.” That’s unlikely to be the case among the tent dwellers, although their seasonal fees have gone up too. The tents used to rent for $75-$100 for the season. These days, they run $4,000-$7,000, including water. Utilities are additional.

Change is noticeable inside the tents, too. Green-Grigg’s tent has a TV and air conditioner, and even Wi-Fi. A few years ago, her husband and she renovated the kitchen, replacing the old stove with a Jenn Air grill, toaster oven and microwave, and adding IKEA cabinets and a breakfast bar. They also put in insulation, giving them a modicum of privacy.

“With a lot of the original tents,” she says, “you could really hear everything.”

Consuming alcohol is still prohibited, but not unheard of. Now, she says, “it’s definitely loosened.”

Bath Avenue Guest House: Compact Victorian with 19 rooms, most with shared baths. The hosts serve a full country breakfast and offer home-baked goods in the afternoon. High-season rates up to $185. 37 Bath Avenue. 732-775-5833.

The Ocean Plaza Hotel: Modernized Victorian with 16 guest rooms and three suites, some with outdoor decks and ocean views. High-season rates up to $525 for a suite. 18 Ocean Pathway. 732-774-6552.