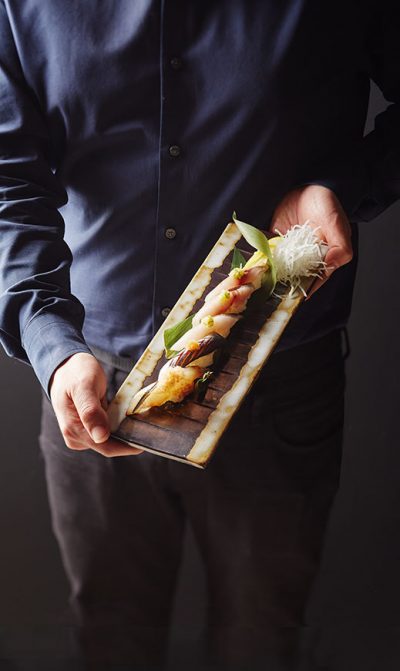 The mackerel course in an omasake.
Photo by Laura Moss

Unlike the austere aesthetic of some sushi restaurants, the vibe at Shumi in Ridgewood is quietly seductive. Its textured white walls and white marble bar seem to glow under caressing lights. Flirtatious house music creates an aural shimmer. One recent evening, a bare-shouldered young woman with pale, dangling tresses like Princess Daenerys of Game of Thrones stood to pour champagne for her table, and somehow it fit right in.

Yet the real show at Shumi is the food—cooked or raw, creative or classic. At the top of the experiential pyramid stands the chefs’ 14- or 21-item tasting menus, known as omakase.

As an example of the creative, consider the $14 appetizer called salmon mozzarella. No, you haven’t wandered into a pizzeria. In fact, the dish is based on one of the oldest sushi techniques, credited to Osaka and called oshizushi. It involves firmly pressing sushi rice and fish into a wooden box, then slicing it into squares.

In Shumi’s appetizer, rice pressed into a tray is covered with minty shiso leaf, jalapeño, red onion, marinated salmon and mozzarella. The tray is run under a broiler, says Shumi executive chef/owner David Seo, “so the salmon cooks and the cheese melts, like pizza.” Brushed with tangy-sweet eel sauce, squirted with spicy mayo and sprinkled with crispy onions, it is sliced and rushed to the table. We made ours disappear amid ooze and aahs.

Shrimp crunch, another of Seo’s inventions, involves draping a butterflied broiled shrimp over each of six bite-size mounds of rice. Each shrimp is topped with a mix of rice vinegar, Japanese mayo and masago (capelin roe). A hand torch caramelizes the mayo and pops the tiny eggs, creating a smooth smokiness. The dish is served sprinkled with crunchy tempura flakes and furukake, a blend of sesame seeds, seaweed flakes, salt and sugar. It is quite the flavor bomb.

More traditional, but just as enjoyable, was fried oyster salad. Eight plump tempura oysters were set in a bird’s nest of fried potato matchsticks with a salad of microgreens on the side.

Whatever you order, your meal will begin with a miso soup that, for once, grabs and rewards your attention. Thick and umami rich, “it is not a broth, but cooked the Japanese way,” says Seo, “with a lot of tofu, seaweed and scallion.”

Seo, who designed the restaurant as well as its menu, says he “visualized a place with a contemporary, loungey, urban vibe, serving not just a meal, but a total experience involving all the senses.”

Now 40, Seo came from Seoul to Livingston with his family when he was 15. He studied interior design while working in Japanese restaurants. “I needed to make money, and I couldn’t stay in school,” he explains. “In 2001, I got a job in a Manhattan interior design firm where I’d interned, but being in an office wasn’t my thing. I realized that creative and visual abilities like mine are key to Japanese cuisine, where your tools are flavor, texture and presentation.”

Seo honed his knife skills working in those restaurants. “Learning sushi is a long road,” he muses. “Every Japanese master begins as an apprentice, and I found Chef Ike. He’s a sushi sensei and my mentor.”

Ike is the sobriquet of Tokyo-trained Kunihiko Aikasa, 65, chef/owner of the critically praised original Shumi, which he founded in 1986 in Somerville and still operates there.

The two met in 2009. “We just clicked,” Seo says. “His omakase is an amazing experience.” Seo, while overseeing a group of Asian restaurants at Newark Liberty International Airport, started working part-time at Shumi Somerville.

“My goal all along was to open my own Japanese restaurant with a focus on omakase,” he says. After working full-time in Somerville for 15 months, Seo opened in Ridgewood last June. “He let me use the Shumi name,” Seo says. “It was such a gift. It is almost a father-son relationship.”

The admiration is reciprocated. “David puts his customers first, which is the number one thing for a chef,” says Aikasa. “He always has new ideas. Without that, you get old. You must respect tradition, but keep it interesting.”

Aikasa comes from Somerville, about an hour’s drive, to present omakase in Ridgewood Tuesdays and Wednesdays. Seo and his chefs present it every night. The meal, a cascade of flavors, builds “from light to spicy to rich to sweet,” says Seo. Sourced from around the world, “fish and shellfish run in season, so new fish are always coming in.”

About half the restaurant’s customers order one of the two omakases, offered at the sushi bar or at a table. Seo recommends the bar, where each course is presented singly, instead of in groups. Another reason to favor the bar, he says, is because “sushi is best within one minute of the cold fish hitting the warm rice.”

At the bar, moreover, you enjoy a sustained interaction with the chef. In the omakases, each course offers contrasting sections and elaborations of bluefin tuna, salmon, mackerel, yellowtail, small Japanese fish called kohada (shad), sayori (needlefish), and whatever else is new and dazzling.

The special omakase justifies its price bump with numerous extras, such as Dungeness crab, Japanese freshwater red shrimp, king red snapper with smoked skin, and three slices of paté-like monkfish liver, each with a different topping.

The à la carte menu offers many items from the omakase menu. Bowls of ramen boast robust, long-simmered bone broth. There are six ramens, each with its own flavorings, meats and vegetables.

Seo’s sushi rolls are designed “not to overwhelm the taste of the fish,” he says. Each roll has its own character: spicy, smoky, crunchy, unctuous or vegetal. In the signature Shumi roll, spicy tuna is wrapped in shrimp, topped with spicy mayo and eel sauce, caramelized with a torch, and sprinkled with scallions and tempura flakes. Seo says it is ordered 400 to 500 times a week.

Two of my dinner guests, a couple who lived in Tokyo in the 1990s, were delighted with Shumi.

“We live for sushi,” said the wife, “and this is the freshest and most flavorful I’ve had outside Japan.” Her husband enthusiastically agreed.