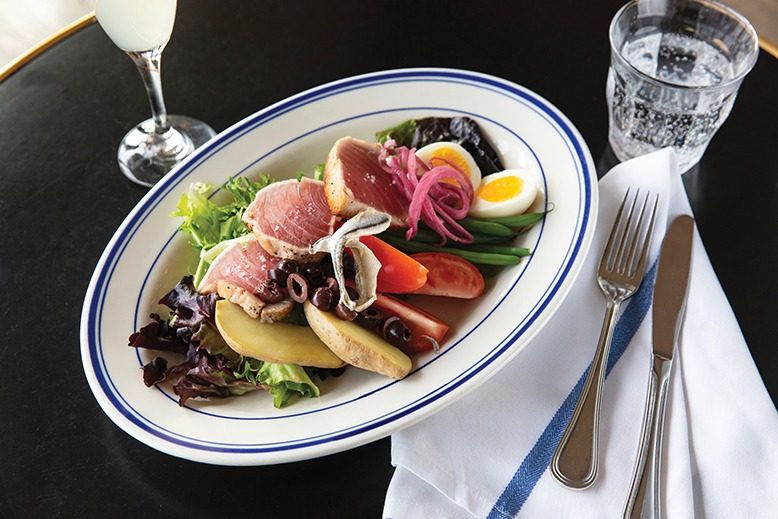 When I first visited the newly opened Brasserie Mémère in late February 2020, I was thrilled by its scrupulously authentic Alsatian food. My meal was as hearty and satisfying as the one I had once enjoyed in New Orleans at chef John Besh’s lauded Franco-German brasserie, Lüke. I couldn’t wait to make my second visit to Mémère, but within days, the pandemic had shut restaurants down.

I recently returned to Mémère to start from scratch. Unchanged was the nostalgic Gallic dining room, with antique prints collected at Parisian flea markets by chef/co-owner Thomas Ciszak and his wife, Evelyn, Mémère’s sommelier and mixologist. On both visits, the restaurant was lively, its bar animated by patrons relishing a sensational weeknight deal: half off wine, beer and cocktails, and just $10 for the kitchen’s well-made savory tarts. Taking a bar table, I commenced with the enticingly composed tarte Parisienne, laden with Taleggio, pear, arugula, shallot jam, and chunks of the house’s impeccable, silken foie gras.  Brasserie Mémère is the latest project of Closter resident Ciszak. Now 51, he grew up in northwestern Germany, “learning all about food and cooking from my Oma [Grandma] Maria, a private chef,” he says. “We’d make big family meals with our garden produce and foods we’d canned. I knew around age 11 I wanted to be a chef and worked in restaurants for the internships we had in high school.” The budding chef went to culinary school in Germany, then assisted in German Michelin-starred restaurants, including the two-star Résidence, “Europe’s first high-end, fusion-cuisine kitchen,” Ciszak says. “It was a new kind of freedom and very exciting.” He emigrated in 1994 and landed at the Manor in West Orange, and later at Tavern on the Green in Manhattan’s Central Park, and then at Copeland in Morristown. In 2010, he set a trend by transforming Chakra in Paramus into a nightclubby, Moroccan-looking destination with a tempting global menu. Chakra closed in 2019, but Ciszak still oversees Copeland’s reincarnation as Blue Morel.

“Mémère is my passion now,” he says. Mémère is French for “grandma.” The faithfully French menu is his creation. Recipes are a collaboration with his executive chef since opening, Kevin Takafuji, a Hawaii-raised, French Culinary Institute-trained alumnus of Le Bernardin and Daniel in Manhattan and Ciszak’s Blue Morel. Most recently, Takafuji had been top toque at the Pluckemin Inn in Bedminster (a recurring pick on our 30 Best Restaurants list). “Kevin runs the kitchen at Mémère,” Ciszak says. Takafuji was cooking on my first visit post-reopening. To follow up my dreamy tarte Parisienne, I ordered the velvety butternut squash soup, which I later learned is vegan, made with coconut milk instead of cream. I was eager to dig into Mémère’s choucroute garnie, or “dressed cabbage,” a porkfest set upon sauerkraut. This was the dish that, pre-pandemic, had transported me back to Lüke in New Orleans. Distressingly, this time, it was overcooked and bland. My companion’s pork schnitzel, a flattened, fried pork tenderloin, cried out for more oomph in its breadcrumb batter than furnished by its recipe of flour, egg, salt and pepper. The accompanying red cabbage braised in apples, red wine, vinegar and aromatic spices was more sweet than savory.

For dessert, I sampled cognac ice cream, a custom flavor from Piece of Cake in Rahway. It was pleasant, but not revelatory.

I figured the kitchen was having an off night and returned with high hopes a few weeks later. The meal began promisingly. A bowl of French onion soup flaunted a lid of broiled Gruyère, its puffy shape resembling a chef’s toque. Enriched and intensified with shredded oxtail, this splendid soup was an umami tsunami. Chunky, house-made paté de campagne proved impeccable. My table’s only disappointing appetizer was an American Wagyu steak tartare, underseasoned and overchilled. On a third visit, however, the temperature was just right, the flavors pickly, with a flicker of spicy heat. The bœuf bourguignon was disappointing on one visit yet sumptuous on another. Photo by Brent Herrig

Optimist that I am, I ordered the choucroute garnie again, seeking redemption for the Alsatian icon. Not to be. This time, the pork chop was dull and dry, the weisswurst soggier than before, the potatoes and carrots squishy. And the dish had come out tepid. So had my guests’ bœuf bourguignon and duck confit. Once they were reheated, we passed them around. The slow-cooked stew of American Wagyu beef cheeks was overcooked, its components spongy. Its namesake Burgundy wine had been added too late to blend in, creating excessive wine flavor and an alcohol tang. On the third visit, we tried it again, and it was sumptuous and on-target.

As for the duck, the confit method (cooking low and slow in duck fat) should produce crisp skin and tender meat. But the hefty Moulard duck leg was tough, its skin leathery. The underlying, cassoulet-like stew, composed of French white beans, Toulouse garlic sausage, pork shoulder, pancetta, bacon and confit gelée, had cooked into mush. Pervading the stew was an unwelcome sweetness laced with what I perceived to be chai spices; the duck leg’s sugary glaze of orange, star anise and clove had oozed down.

My guest who’d ordered steak frites lucked out. His half-pound hanger steak had been cooked sous vide to tenderize this sometimes chewy cut. The ideally crisped fries were Bintje potatoes imported from Belgium, precut and frozen, yet as sprightly as fresh spuds. Those Belgians know their taters. My table shared two desserts The Kouign Amann apple turnover flaunts an exotic Breton name from Celtic Brittany. It was toothsome, but the pastry shell was pedestrian. Our other meal-ender was chocolat pot de crème, a chocoholic fantasy involving three types of Valrhona chocolate (bitter, milk and flakes), plus a layer of salted caramel. But this batch was too sugary, overwhelmed by caramel. A dessert that brings smiles is the tree of Parisian macarons on lollipop sticks. 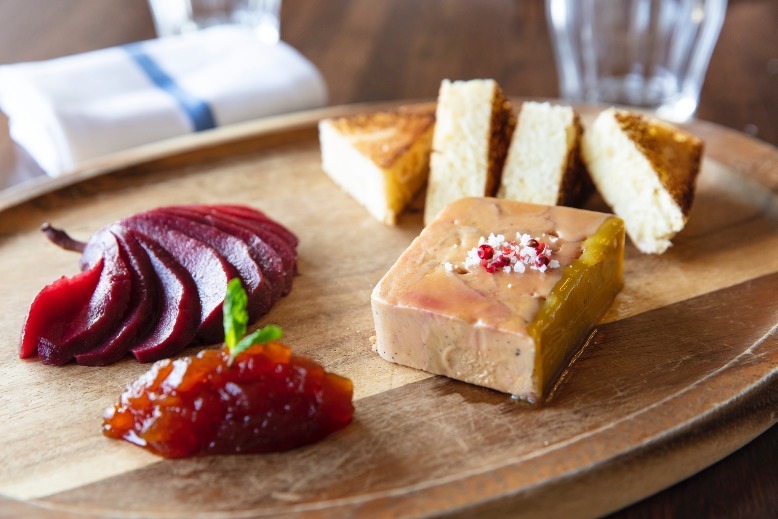 The foie gras platter is a dish you can count on. Photo by Brent Herrig

I learned after this meal that Kevin Takafuji had been on vacation, and the spatula had been passed to the kitchen’s three sous-chefs. I know from my first dinner that Brasserie Mémère can do much better. In fact, at my final visit, when Takafuji was back at the stoves, the kitchen recaptured its initial élan. It seems you can always count on the savory tart, foie gras, onion soup and steak frites.