From left: Zucchini flowers filled with house-made ricotta; a wheel of Pecorino Romano serves as a mixing bowl for pasta for tableside chef Joaquin Santiago. Photos by Stuart Goldenberg

It’s not customary to discuss Caesar salad at the start of a review. After all, at many establishments, it’s that thing drenched in a gloopy substance formulated in some factory. But at Atlantic City’s Cafe 2825, the Caesar is, in many ways, a perfect place to begin.

A uniformed server, one of several who will orchestrate your experience, arrives at your white-clothed table with a large wooden bowl, a wooden spoon, and a tray containing pasteurized egg yolk, Worcestershire sauce, crushed garlic, Parmesan, dry mustard, anchovies and red wine vinegar—the latter not typically included in a Caesar.

These go into the bowl one by one and are smashed together until blended into a paste. Then another server adds olive and vegetable oils, and the first combines until perfectly creamy. Then yet another appears with freshly cut romaine that gets a spritz of fresh lemon so it clings to the leaves before the first server tosses the lettuce and dressing with freshly ground black pepper and transfers the salad to a smaller bowl for the table.

As that server disappears, another swiftly portions out the Caesar to each person at the table, and provides as many extra grinds of pepper as each desires.

Requiring a total of four people, the Caesar process at Cafe 2825 unfolds over a solid three or four minutes. Given how busy the restaurant is, even on a random Tuesday night pre-summer, that is perhaps the least sensible way to serve Caesar salad. Why not send server number one out with everything needed to make a Caesar, instead of this procession of multiple staffers? Why do it in a way that consumes minutes and space on the crowded floor as opposed to seconds in the kitchen? An efficiency expert would have an aneurism.

The answer is that turning a simple salad into a tableside experience makes great theater and is contagious. Other tables watch, then order their own, the way you might covet a flaming drink at a tiki bar once you see one presented to another customer across the way. 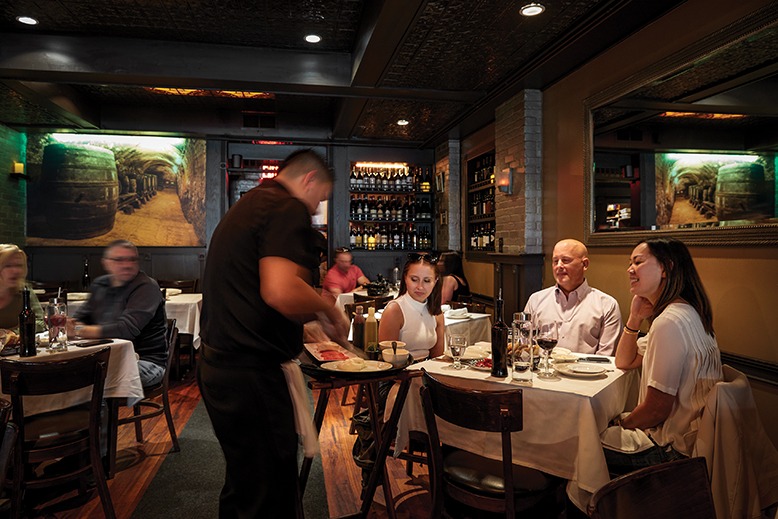 A server shows off house-made burrata. Photo by Stuart Goldenberg

At Cafe 2825, which opened in 1986, this all feels special. And special is what you need in a town where every casino has an Italian restaurant­—in some cases, two. (For our full list of the best restaurants in Atlantic City, click here.) Indeed, the magnificent tableside attractions at Cafe 2825 extend beyond the Caesar. The pasta dish cacio e pepe involves a 70-pound wheel of Pecorino Romano with a well carved into the top, wheeled to your table. One server uses a blowtorch to melt some of the cheese, along with some added truffled cheese, and another arrives brandishing a hot sauté pan of steaming, house-made spaghetti, then deftly pours it into the wheel.

There’s also a tableside polenta presentation, topped with a complex pork ragù. An impossibly massive Kurobuta pork chop is deboned and shingled in front of you, then topped with sweet and hot sliced cherry peppers and caramelized onions. Before your eyes as well, fresh cheese curds are methodically turned into creamy burrata. You’ll be convinced this is the best mozzarella you’ve ever had, whether that’s literally true or not. The visuals add dramatically to the appeal.

“It’s all like an opera,” says Joseph Lautato, who opened Cafe 2825 with his wife, Ginny. “Everything is so carefully orchestrated. People who come here understand that they are paying for something that’s visually interactive, but also very good.”

And very good it is, with or without tableside theatrics: squash blossoms stuffed with housemade ricotta and bread crumbs, fried ever so delicately; Sicilian-style calamari, wide tubes of tender-roasted squid filled with a mixture of bread crumbs, anchovies, crabmeat and scallions; the housemade pastas, from rigatoni to mafalda to pappardelle; and the amusingly named chicken parmigiana Bolognese à la vodka fra diavolo, a cook’s concoction from about 15 years ago that has endured.

Joseph oversees the kitchen, sometimes working the floor, chatting up tables and handing out precious shards of Parmigiano-Reggiano gratis. He and his late mother, Rose Lautato, drew up the menu and recipes 36 years ago, and little has changed. Ginny tends the well-stocked bar, makes a mean martini, and will suggest the perfect bottle from the expertly curated wine list.

Desserts are all made daily in-house by Carina Delina. You won’t soon forget her decadent melding of a New York cheesecake with a blueberry crumb cake, the blueberries sourced in season from nearby Hammonton, the self-proclaimed (but unchallenged) blueberry capital of the world. Delina has held the pastry post for 15 years. If that seems a long time, consider that she is the restaurant’s most recent hire—other than the children of three other longtime employees. 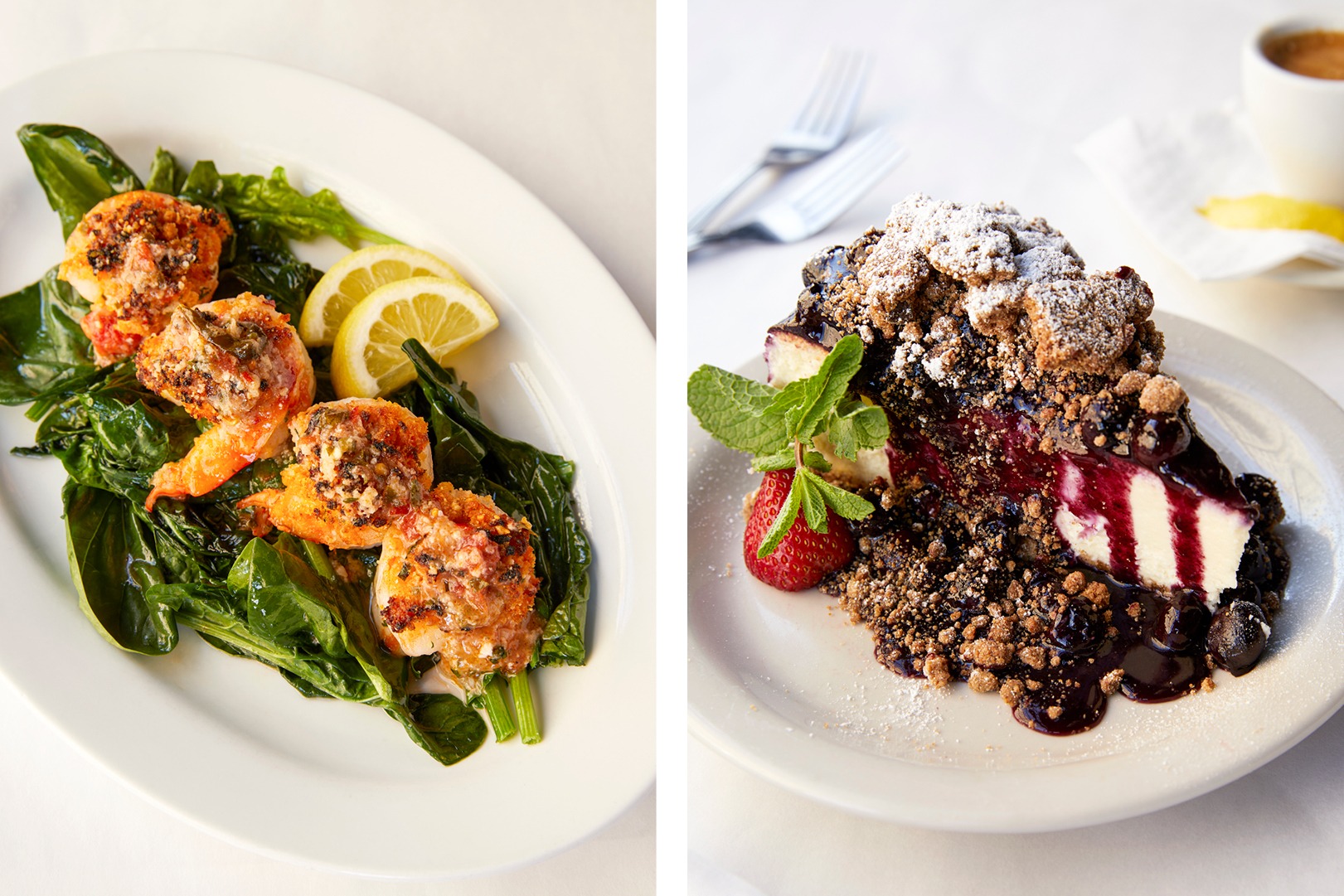 Cafe 2825 is easily the best Italian restaurant in a Shore town overrun by them, both in casinos and not. Some fans go so far as to call it the best Italian restaurant in the state, but so endowed with great Italian dining is New Jersey that the matter is beyond resolution. I do know from personal experience that this is one of the hardest tables to get in the area. This problem will be only slightly alleviated by an expansion this fall.

Not bad for a couple who bought the property as an investment at a time when casinos were wildly expanding their footprints. The Lautatos hoped to eventually sell the building to a casino developer.

“It was truly a speculative thing,” says Joseph. “I thought we might retire long ago on the coast of France. Instead, I’m still rolling meatballs. Ginny and I get here at 10 am and don’t leave until 11 at night.”

Reservations are taken only a week in advance. Don’t be surprised if the phone line is busy or if you leave a voicemail that is not returned. (They return calls only if a reservation becomes available.) A credit card is required for all reservations, with a $50-per-person penalty should you cancel within 24 hours of your slot.

“Unfortunately, we have to say No more often than we say Yes,” Lautato explains. “We turn 100 people away per day. I guess that means we are doing something right?”