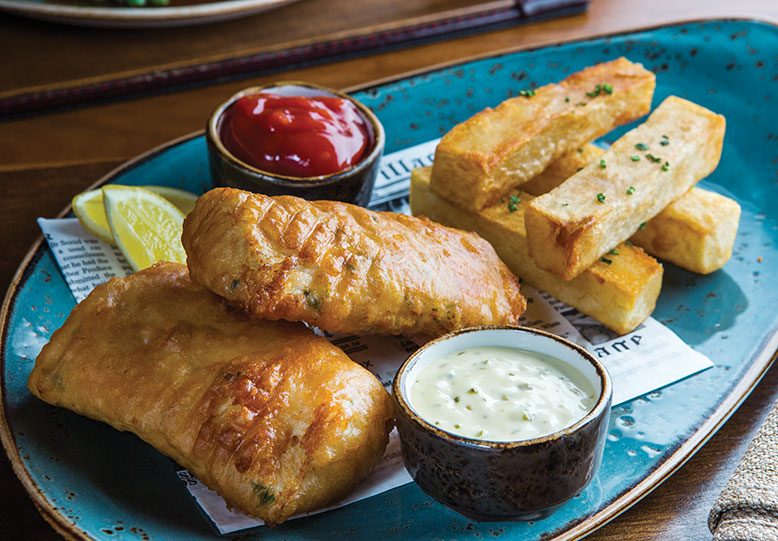 This article was last updated on February 1, 2022. It was originally published in August 2019.

There’s never been a shortage of great restaurants on and off the Atlantic City Boardwalk. The city’s casinos have certainly helped make it a place for celebrity chefs like Gordon Ramsay to open upscale restaurants, but many eateries still boast traditional charm.

Here are our top picks for the best restaurants in Atlantic City, in alphabetical order. 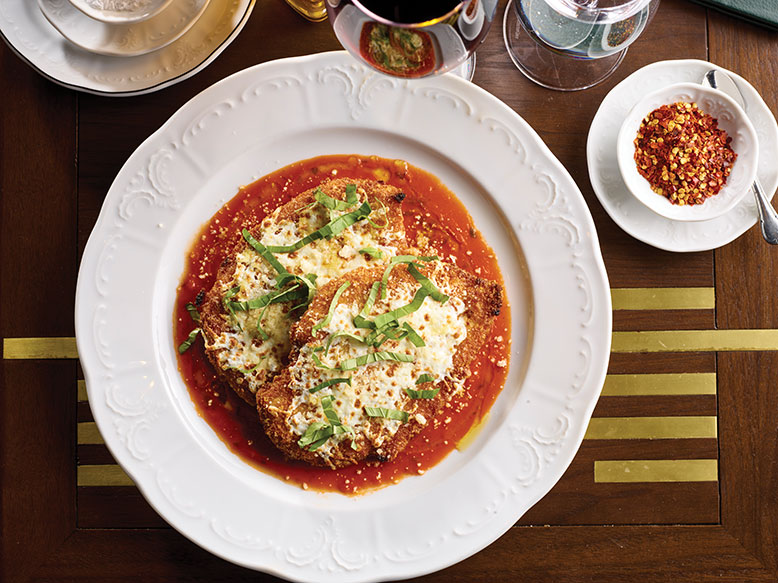 Angeline at the Borgata is the first fully Italian restaurant from Michael Symon, an Iron Chef and James Beard Award winner, and co-host of The Chew. The modern restaurant was named after Symon’s mother, Angeline, and its signature dish, lasagna, is made from her recipe. From housemade pastas and arancini, to the sentimental favorite chicken Parm, Angeline’s menu hits all corners of soulful Italian cuisine, with an impressive wine list to boot.
The Borgata, 1 Borgata Way; 609-317-1000

Despite being open since 1986, this cozy Italian restaurant still remains a relative secret. The small 52-seat eatery boasts old-school charm, with excellent renditions of Italian favorites like eggplant rollatini, stuffed artichokes, veal chop Parmigiana and several housemade pasta variations. Most notable are the tableside experiences, such as the one involving burrata, where owner Joe Lautato makes fresh mozzarella straight from the curd, which is then sliced warm and plated family style. Other tableside experiences include cacio e pepe prepared in a hollowed wheel of Pecorino cheese. The wine list includes bottles from Italy and California.
2825 Atlantic Avenue; 609-344-6913

This family-owned Italian restaurant has been an Atlantic City staple since 1921, and even appeared on Boardwalk Empire. Dining in the basement at Chef Vola’s is an intimate, cash-only experience complete with a secret side door. The menu is unpretentious, with homestyle Italian classics like bone-in veal Parmesan and shrimp fettucini. Reservations recommended. BYO.
111 South Albion Place; 609-345-2022 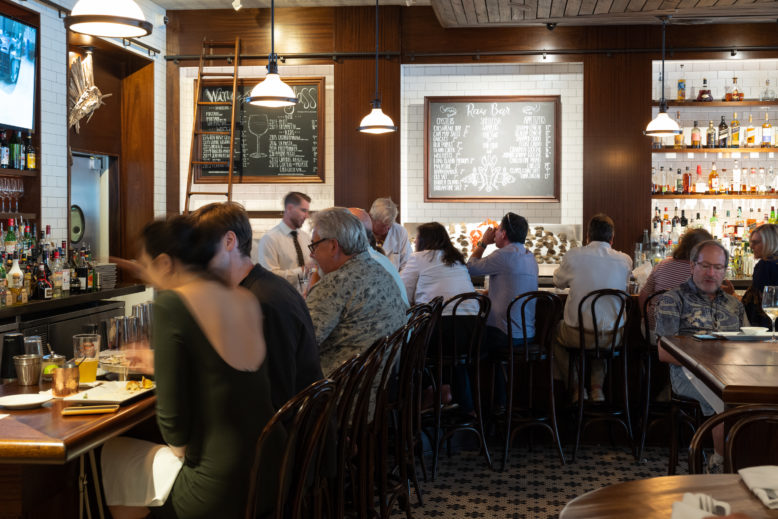 Opened in 1897, Dock’s Oyster House has been sustained by four generations of the Dougherty family through world wars, the Great Depression, and the declines and rebirths of Atlantic City. Dock’s closed in 2015 for a multimillion-dollar renovation and expansion. What didn’t change with its 2016 reopening was the family’s commitment to fresh seafood. Behind the bar, chilled lobsters, oysters, clams and shrimp sparkle on ice below the chalkboard list of daily offerings. Oyster enthusiasts can count on about a dozen rotating selections that include Cape May Salts, Brigantine Salts, plump Chesapeake Bay oysters from Maryland, briny Wellfleets from Cape Cod, and Bluepoints and Barren Island oysters from New York State. You also can get littleneck or top neck clams on the half shell.
2405 Atlantic Avenue; 609-345-0092

When owner Gino Iovino opened Girasole in 1992 just a block from the Boardwalk, he chose to offer an experience unlike the ones tourists get in the showy, crowded casinos nearby. Once inside, reminders abound that girasole is Italian for sunflower. The dining room is decorated in deep blues and sunny golds. The family-owned restaurant is known for its classic Italian renditions: housemade hot and Italian sausage with broccoli rabe and cannellini beans; calamari baked in tomato sauce; carpaccios made from filet mignon and yellowfin tuna; and more than a dozen pastas, some made in-house.
3108 Pacific Avenue; 609-345-5554

Chef Michael Schulson is at the helm of the Borgara’s Izakaya, which is inspired by the traditional pubs of Japan. Before opening the restaurant, Schulson spent time exploring the world of izakayas. Some serve sushi, tempura, stews and noodles. Some specialize in robatayaki, a small-plates cuisine of skewered grilled meats, fish and vegetables. In Atlantic City, Schulson offers a taste of everything—tuna tataki, miso-glazed foie gras, edamame dumplings, sushi and sashimi, and Kinki chicken wings that are some of the best you’ll ever eat—crispy, juicy and spicy. Izakaya also offers an extensive premium sake list.
The Borgata, 1 Borgata Way; 609-317-1000

One of the oldest restaurants in Atlantic City, the venerable Knife & Fork Inn first opened in 1912 as a private club, and then—as the story goes—in 1927, on the eve of Prohibition, it became an exclusive dining room. Today, the upscale eatery features steaks, chops and seafood, classic steakhouse sides and an extensive wine list.
3600 Atlantic Avenue; 609-344-1133

Makai means “by the sea” in Hawaiian, and looking out the sixth-floor windows of this newest addition to the Ocean Casino Resort confirms that’s where you are. Warren Richards, Ocean’s senior vice president of food and beverage, says attending a wedding in Maui gave him the idea for the theme. “A lot of places were going the Key West route, and I thought, Why not do the other ocean?” Located next to the famous White House Sub Shop, Pancho’s is an unpretentious stop for excellent Mexican eats. Fabiola Sanchez, who is Colombian, opened Pancho’s in 2006 “as a typical Mexican taqueria to serve Mexicans and Latinos who work at the casinos,” says her son, Joshua Cruz. Together, they do all the cooking “in front of our customers,” Cruz says. Even the tortillas are cooked to order. The results are sublime: terrific tacos topped with tender chunks of brisket, or al pastor pork brightened with pineapple; and enchiladas in a mudslide of mole poblano, heady with cinnamon and clove. BYO.
2303 Arctic Avenue, 609-344-2062

Eager to replace the somewhat stuffy Robert’s Steakhouse space with a middle ground between their high-end and casual options, the Hard Rock in July 2021 opened Sandpiper, a tapas restaurant that Grace Chow, vice president of food and beverage, describes as “more lighthearted and fun.” (The restaurant made our Best New Restaurants list in February 2022.) The 200-seat restaurant sports Shore colors and a floor-to-ceiling tree at its center. Located next to the casino’s theater, Sandpiper has been a hit pre- and post-show. Executive chef John Zaitoun’s small plates run the gamut, from pierogies to tenderloin sliders to truffle-cheese dusted tater tots to toothsome and stimulating shrimp ceviche. The drink menu has lightened as well, with fruity craft cocktails and house-made red and white sangrias leading the way. —JPC
1000 Boardwalk; 609-449-1000