I thought I would hate it. I really did. Yes, restaurant critics are supposed to go into a review with an open mind. But in the case of Gordon Ramsay Hell’s Kitchen at Caesars—Ramsay’s third Atlantic City eatery and the brand’s first on the East Coast after California, Nevada and Dubai—we have a restaurant inspired by a not-particularly-entertaining televised cooking competition that has somehow managed to exist for 21 seasons. At the helm of this restaurant, conceptually at least, is, of course, the laughably profane namesake celebrity chef who plops his moniker on restaurants around the world and shows up maybe once or twice a year for selfies and to rally the troops.

Critics love to eviscerate corporate restaurants, particularly those owned by le chef célèbre. For a primer on such critiques, you need only read the iconic 2012 New York Times review of Guy Fieri’s Times Square restaurant. Critic Pete Wells turned evisceration into an art form and had fun doing so. I’ll be having no such fun here, because Hell’s Kitchen turned out to be much better than expected, albeit exorbitantly priced. 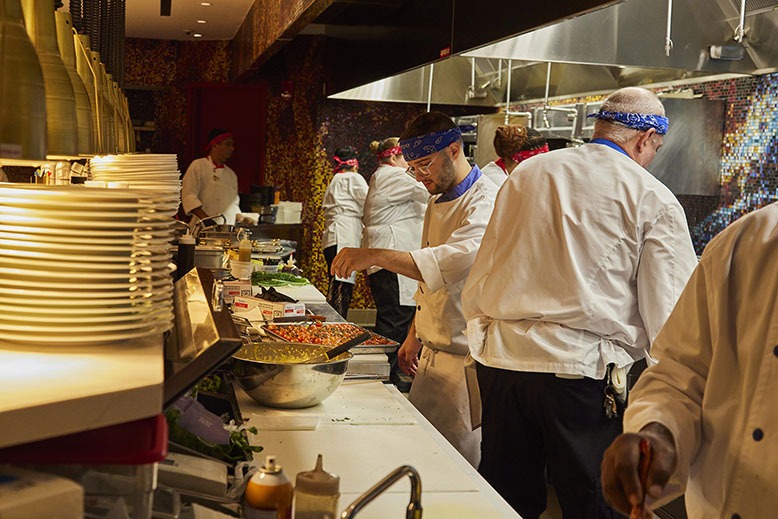 You enter from the casino floor, passing a large bar and lots of Hell’s Kitchen images and iconography, as well as some casual tables where those lacking reservations are plunked. You don’t want those tables, or seats at the bar, where the vibe is more drinking than dining. Proceed to the host stand—and you better have a reservation. I did, but on both visits, the host told me my table was not quite ready and that I was welcome to have a drink at the bar. Which I did.

Cha-ching! That’s the sound of money leaving your pocket. On my first visit, with one guest, a Maker’s Mark old-fashioned and a Beefeater martini set me back more than $50, so it didn’t surprise me when, on my second visit, one round for four of us surpassed $100.

But, hey, inflation. And this is an Atlantic City casino, where prices are more inflated than elsewhere so that players feel they’re getting more for their gambling when they get a comp to a restaurant like Hell’s Kitchen: “Sure, I lost 20 G’s at the roulette table, Margie, but I got this $500 meal for free!” If you’re looking for a bargain, you don’t belong at Hell’s Kitchen. That’s why buffets exist.

Once you’ve finished your round of pricey drinks, your table will magically become available. That’s when you descend (remember, hell theme) stairs to the pleasantly boisterous dining room with its grand view of the open kitchen and, mercifully, no view of slots. If they try to stick you at a square four-top, as they did me, push for a plush booth, where you’ll feel more like a VIP. 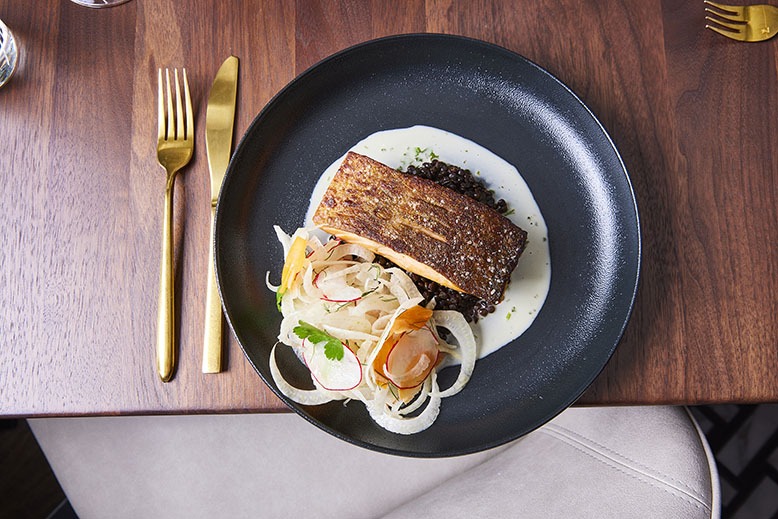 As with many fine-dining restaurants in Atlantic City casinos, where the servers tend to be lifers, the service at Hell’s Kitchen is exemplary. They know the menu inside out. They’re friendly, but not overly familiar, and funny where appropriate. They orchestrate your meal in such a way that you don’t regret dropping hundreds of dollars on dinner.

There is a lot to like on the menu of on-site chef Dianna Miller. I’m a bit tired of tuna tartare, but the one at Hell’s Kitchen woke me with its pickled Fresno chilies, cilantro and soy-chili vinaigrette, all bursting with freshness. 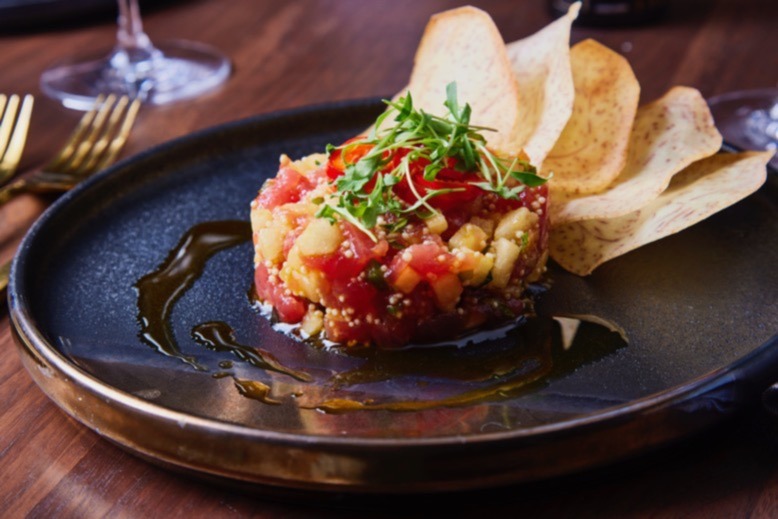 Plump scallops over puréed celery root with smoky bacon lardons were sublime. Pan-seared salmon, skin so crispy, over shaved fennel salad, al dente beluga lentils and a citrusy beurre blanc was, no exaggeration, the best salmon I’ve had since a lavish fish dinner several years ago in Iceland. For those craving red meat, highlights include braised short ribs (tender and intensely beefy), and the strip steak rewardingly paired with sizzled shishito peppers and earthy maitake mushrooms. Over the course of two meals, we really had just two complaints of any significance. One concerned the popular and, at both meals, server-suggested lobster risotto, rich with flavor and a not-unwelcome tinge of sage, topped with a butter-poached lobster tail. Alas, on both visits, the risotto suffered severely on texture. You either get risotto right, or you get it wrong. There is no in-between. And on my visits, the risotto was mush. The other concerned the house specialty, also server suggested: Ramsay’s beef Wellington, a staple at many of his restaurants. But for $69, one would expect a higher quality of beef than you might get at a catering-hall wedding, and a pastry that had escaped the pitfall so many home chefs have experienced: dreadful sogginess.

Also, while you’d expect the beef to be tightly encased in the pastry in which it was, presumably, cooked, mine slid right out, almost as if the beef and pastry had been cooked separately and then married for plating—things that make you say hmmmm. In any event, any self-respecting British nan would toss the dish into the rubbish bin, especially at $69. The sticky toffee pudding, a British dessert, is worth trying. Photo by Felicia Perretti

As your night winds to a close, your server will run through the list of desserts. Don’t be afraid to interrupt with three words: Sticky toffee pudding. I’ve had Ramsay’s version at all his restaurants I’ve visited, and he’s mastered this devilishly decadent dessert from across the pond. Less fulfilling (but certainly filling): the chocolate cake and the strawberry shortcake, which seemed to have come from a freezer at some point.

All in all, it’s a memorable night out for any fan of Ramsay or the TV show, though you’ll likely have to settle for selfies with the life-sized photo of Ramsay flipping the bird, his middle fingers replaced by giant flames. 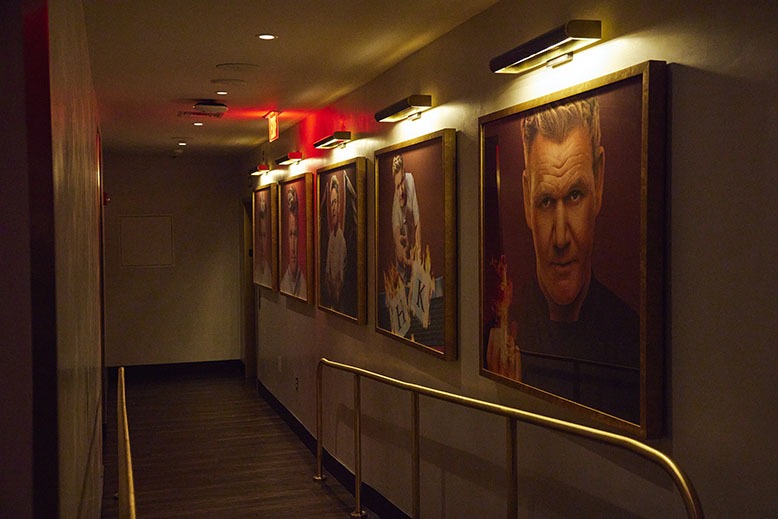 An image of Gordon Ramsay greets diners with a flaming middle finger. Photo by Felicia Perretti