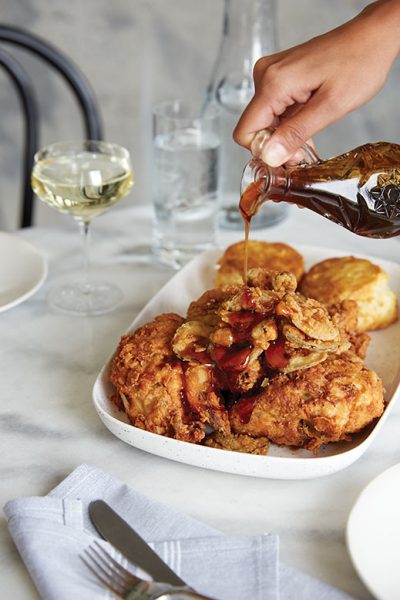 Long before Modine became an enchanting addition to the Asbury Park dining scene this year, its namesake, Helen Modine Gore, was growing up in rural Virginia and Oklahoma in homes without electricity. But that wasn’t the hard part. “That unusual middle name got made fun of,” says her granddaughter, Jill Meerpohl. “Kids called her things like Modine Bean. It caused her a lot of strife.”

Meerpohl and her husband, Chris Davin, thought her paternal grandmother deserved better than that. So they named their Southern and Low Country restaurant “as a little tribute to her. She was a really strong woman,” Meerpohl explains. “My grandfather Meerpohl died of a heart attack before he was 50, so Modine raised my dad and his sister by herself while working two jobs and growing her own food, including raising chickens.

“My mom was an amazing cook, but Modine taught me a lot of stuff I’ve carried with me my whole life.”

First among many lessons was that “you don’t have to make a biscuit from a can.” From that stemmed a lifelong love affair with baking.

At the restaurant Modine, one look at the two hot, tawny biscuits that come with the whole smoked fried chicken gave me greedy eyes. But then, so did the chestnut brown chicken stacked in pieces, the heap of straw-colored discs on top (barely battered, deep-fried pickles, it turned out) and the carafe of honey (maroon from steeping in chili peppers and spices).

Each component was commendable. Together, they were a blast. For sides, we chose collards—the most engaging I’ve come across, cooked with ham hocks, coconut milk and Ethiopian spices—and equally distinctive bacon potato salad, slivers of pickled red onion giving it a lift and a barely detectable blush. Faced with this feast, I restrained myself—but only relative to a hawk dive-bombing its dinner.

A passing grade in fried chicken and biscuits is essential for a Southern eatery, and Modine flat-out aced it. The kitchen (Davin and Meerpohl are the chefs) also aced other essentials, such as skillet cornbread made with heirloom cornmeal from South Carolina, house-made andouille sausage with mashed potatoes and gravy, and Low Country shrimp and grits.

Through Local 130, the Asbury Park-based seafood company, Davin buys “literally a boatload at a time” of wild Florida or Georgia shrimp, never chemically treated. They are large and served head on in a rich shrimp-reduction sauce over wonderfully nubbly grits. The shrimp are tender and delicious, but suck all the juicy goodness out of the heads and you hit the flavor jackpot.

Modine changed my mind about oysters. I love them, but just one way: raw on the half shell, shunning lemon and anything else that would blot out their delicate, natural liquor. Now that I’ve had Davin’s Barnegats, broiled on the half shell in chipotle-bourbon butter, I’m an apostate, and an avaricious one at that.

Of several dishes that might have gotten away with being just passable, only deviled eggs were. We had two of the three salads. What I didn’t see coming in the Little Wedge, with its crisp bacon and smoked blue-cheese dressing, was broad leaves of curly green lollo—hydroponically grown in Jersey—instead of the usual iceberg (but that’s how it is with icebergs). The Monticello involved frisée, delicious smoked trout, pecans and a creamy sesame dressing. Why “Monticello”? Thomas Jefferson grew sesame plants there.

The menu is not slavishly Southern. A perfectly seared Arctic char entrée was as pleasing to the eye as to the palate, with triangles of pickled radish around the fillet, which rested on a smear of crème fraîche under a roof of deeply caramelized carrots. You wouldn’t necessarily expect a Southern restaurant to make a ravishing shiitake mushroom soup, but Modine does. Heaps of minced shiitakes are reduced in chicken stock, thickened with roux, rocked with robust spices, smoothed with a bit of cream, and topped with a drizzle of olive oil enriched with bacon bits. The bacon is made in house. As Davin says, “It’s not fun for us unless we’re making everything from scratch.”

Modine, which opened in early January, was years in the making. The least of it was converting the former Fish restaurant—a many-windowed, one-time bank—into an elegantly languorous retreat. How it came to be is a saga, but we have room only for the haiku.

Davin, 32, grew up in Rockland County, New York; Meerpohl, 38, in Naples, Florida. By the time they met in the kitchen of the rustic Vinegar Hill House in Brooklyn in 2009, Davin had culinary training and restaurant experience; Meerpohl was moving out of fashion marketing and into her first love, baking. Later, working at a trendy Brooklyn sandwich shop, they found soulmates in Steve and Shanti Mignona, who moved to Asbury Park, and in 2016 opened Talula’s, the hip pizza place.

Next, says Davin, was “figuring out a [restaurant] we could do” with the Mignonas as primary owners. Davin and Meerpohl didn’t know what kind it would be until they returned from a six-month odyssey, eating from Virginia to Florida.

Modine’s essential fifth partner is GM Andrew Rasizer, who helped launch the estimable B2Bistro in Red Bank in 2015. A sommelier and CIA grad, he is an all-around pro. Also deserving a nod is Paul Check, who manages the bars at both Modine and Talula’s, which he helped open in 2014. At Modine, Check is responsible for such handsome and rewarding cocktails as the Modine Sour and the Spring Shrub.

The most popular dessert is the Black Bottom pie, recently improved by thickening and slightly softening the dense, dark base layer, above which are bananas and whipped cream. The marvel, though, is Meerpohl’s chocolate layer cake. In assembly, each layer is brushed with a syrup made from Modine’s N’awlins-style chicory coffee and a touch of bourbon. It adds backbone to the sweetness, a combination shared with Meerpohl’s grandma, the original Modine.