Something about burnished floors, plush booths, and rows of signed glossies of anchors and athletes signals you are in a serious steakhouse. River Palm Terrace checks those boxes (which is why it recently made our list of the best steakhouses in New Jersey). The cozy bar burbles with lighthearted chatter, and the moodily lit, clubby dining room pulses with toasts and laughter.

[RELATED: The Best Steakhouses in NJ]

Still, River Palm’s raison d’être is not revealed until you dig in with knife and fork. Almost everything I ordered was fresh, hot and skillfully cooked. In one case, redefined. The prosaic-sounding hashed brown potatoes turned out to be an irresistibly crisp, pan-fried pancake of shredded spuds and diced onions.

“Our motto here is ‘Every day is opening day,’” says John Campbell, a co-owner of this location and another in Fair Lawn. “We exist for our diners. We’re a team here, and what motivates us is giving people our best.” The dining room pulses with toasts and laughter. Photo by Cayla Zahoran

Campbell, who grew up in Englewood Cliffs “cooking with my Italian mom,” started working in restaurants in 1973, at 15. Ten years later, he opened River Palm with three partners. “Edgewater was mostly industrial then, and our diners came from Manhattan and all over North Jersey,” he says. “That’s still true, but now we get a lot of locals from the high-rises along the river.”

The kitchen is helmed by Luis Montesinos, who emigrated in 1980 from Lima, Peru, at age 26 with a passion for cooking sparked, he says, by his family’s “delicious, traditional family meals.” He mastered Italian cooking at the popular Armando’s in Fort Lee and joined River Palm Edgewater in 1996 “for a new challenge. Steakhouses are the American cuisine.” Particularly winsome are his seafood appetizers, a steakhouse staple. The delicately fried crab cake, made with jumbo lump crabmeat and a bit of seasoning, is impeccable. Lobster mac and cheese, a much-ordered side, flaunts generous chunks of claw and tail meat and a four-cheese sauce of cheddar, Gruyère, Fontina and Parmigiano-Reggiano. Calamari from Rhode Island’s Point Judith are soaked in milk, dusted with salt, pepper and flour, and deep-fried, were superb. They come with two dipping sauces, the chef’s best-in-class marinara and a gently sweetened sriracha.

As good as those are, around half the tables commence with superb sushi, created by sushi sensei Andy Lin (who may drop by your table to gauge your reaction). The menu offers more than 30 rolls, many named for Bergen County towns, “which brings out the neighborhood pride,” says general manager Stephen Russ. I relished Lin’s charred tuna roll—spicy tuna and avocado topped with chopped tuna enticingly blitzed by a blowtorch—and a special of velvety diced otoro (fatty bluefin tuna) on a crispy rice pancake for textural contrast. 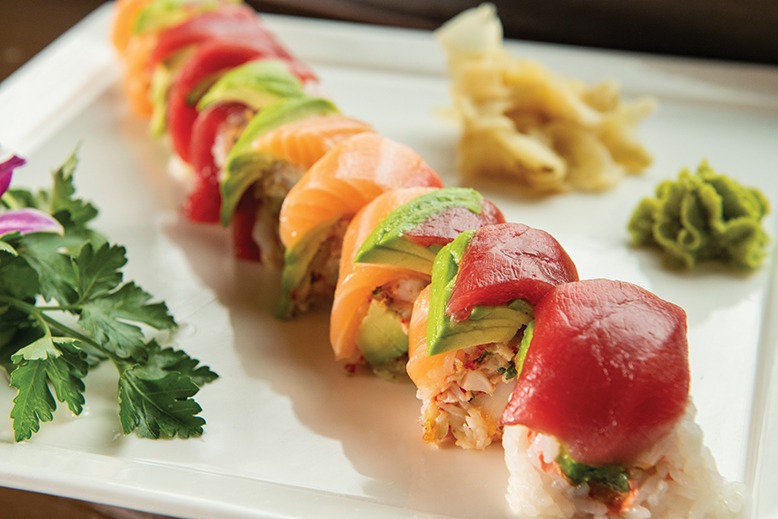 Diners who order a cooked entrée are in for some retro theatrics. Preceding the main course, your server rolls a cart tableside and, with jumbo utensils, dramatically tosses, dresses and serves a lively mixed-greens salad, completed with a shower of blue cheese.

[RELATED: A Guide to Different Kinds of Steak Cuts]

The main event, of course, is steak—Prime domestic Black Angus, dry aged in-house 28 days and cut to order. (Filet mignon and Argentinean-style marinated skirt steaks are not aged.) After a salt-and-pepper rub, the steak is quickly seared and cooked at 1,600–1,800 degrees in an infrared broiler. I sampled a brawny, finely marbled, 24-ounce bone-in rib eye and a 3-pound porterhouse for two. Both were charry outside, lush and pink inside, suffused with beefy flavor. 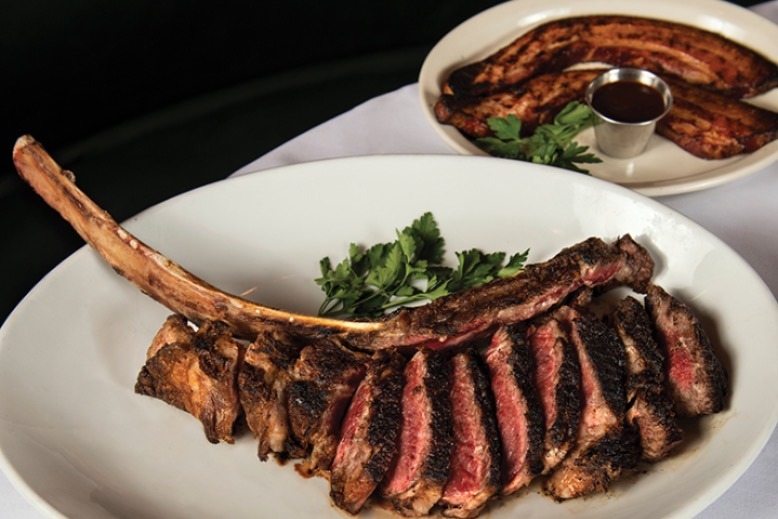 Tomahawk rib eye for two with side of Nueske’s bacon. Photo by Cayla Zahoran

A side of Nueske’s bacon, half a pound, delivered smoky rapture. Just as good was the creamed spinach, distinctively garlic-and-nutmeg enhanced and made from “chopped, blanched, barely cooked fresh spinach,” says Campbell, in a béchamel more dimensional than just cream.

Steaks are not the only option. “Three-quarters of our diners are regulars,” says Campbell, “so we have to keep changing it up.” Colorado lamb chops were rich and rosy, with crackly edges. Lobster from Atlantic Canada is priced by the pound. There are pastas and fresh-caught fish. My pan-seared, sesame-crusted ahi tuna fillet was dewy and meaty, but needed a longer bath in its wasabi-ginger-scallion marinade.

Dessert here runs on a spectrum from soothing to exhilarating. Pastry chefs Ali Osmani and Giacomo Mistretta tend to hit the latter. Their New York cheesecake with fresh blueberry coulis and the warm chocolate brownie à la mode are exemplary. The lusciousness of the brownie (which hails from the Little Fat Girl in New York City), blends dark and milk chocolate and is compounded by a scoop of Graham Slam coffee ice cream from Piece of Cake in Rahway. It harbors terrific toffee-like chunks of chocolate-covered graham cracker. A timeless pleasure, like so much here.