The week of Independence Day, it felt like everyone in Wildwood was talking about Santorini. Not the Greek isle, but the Greek and Italian restaurant that had just opened on Rio Grande Avenue. Having spent the last few seasons as Backfin Blues, the formerly drab, squat building had been given a brightening facelift by new owners, and now its roof deck was full of happy revelers. “It was so busy, the line just to get to the hostess stand was 20 minutes,” a friend told me.

When I visited Santorini later that night, I was able to walk directly up to the hostess stand and be promptly seated. The turquoise and terracotta dining room, however, was packed with customers. Florian Furxhiu, Santorini’s 35-year-old owner, was waiting tables himself. “When you’re the owner,” he said that evening, “you do whatever job needs to be done.” Having survived the opening crush, Santorini has hit its stride: self-assured, yet warm and welcoming. It will stay open all winter, with 80 indoor seats and, as weather permits, 40 on the patio and 60 on the roof. Furxhiu, a front-of-house veteran of Philadelphia’s Italian-restaurant scene and the owner of the fast-casual Tacodelphia on South Broad Street, and chef Armando Gjana, a veteran of La Fontana in Sea Isle City, get food to tables quickly. And that food is quite good.

The menu, a mix of Greek and Italian dishes, is somewhat new for Wildwood, where the prevailing formats are Italian American, upscale bar food and traditional seafood house. For Furxhiu, who came to America from his native Albania in 2000 when he was 14, the combination speaks of home. “Albanian is a mix of Greek and Italian,” he says. From this kitchen comes linguini in a bright tomato sauce topped not with Parmesan, but with briny, crumbled feta and a luxurious duo of split grilled langoustines. The combination of buttery shellfish, tangy, salty cheese, sweet tomato sauce, and al dente pasta creates a perfect bite.

Furxhiu first thought he might open in nearby Sea Isle City, Avalon or Stone Harbor, but didn’t want to compete with friends who had restaurants there. Wildwood, moreover, holds personal meaning for him. When his family immigrated, he says, “for the first and many years, Wildwood was our vacation destination.”

[RELATED: The 22 Best Restaurants in Cape May]

Other Italian-inspired dishes include lush, blush-sauced risotto studded with sweet, local seared scallops and cloudlike potato gnocchi (a house-made Gjana specialty) tossed with succulent crab, burst yellow cherry tomatoes, and a luminous white wine, lemon and butter sauce. Gjana uses that sauce to finish many dishes, from the tender and tangy braised artichokes to the smoke-tinged seafood mixed grill of lobster, scallops and shrimp (all perfectly cooked) to the large, luscious branzino, butterflied and seared on the flattop grill. 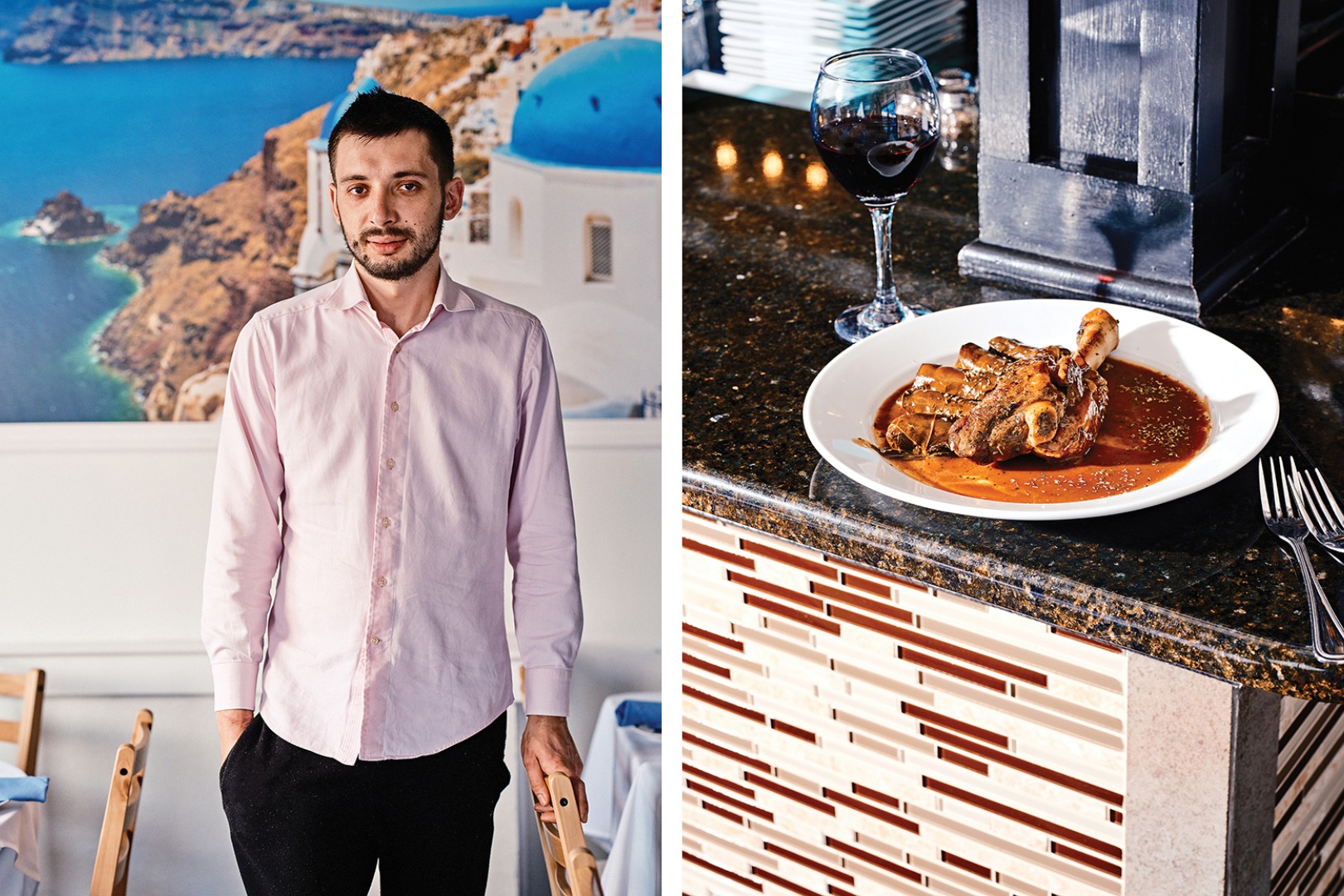 Other than a diner, there are few places in the area to find rice-stuffed grape leaves, let alone ones of Santorini’s freshness and lemony brightness. They come alongside a massive lamb shank, braised for six hours until all but falling off the bone, lush with umami. Another classic, moussaka, is reimagined. Instead of a casserole, Santorini presents a whole eggplant, split, hollowed, and filled with ground beef, diced potatoes and bechamel, baked until bubbly and comforting. Spanakopita, the traditional Greek spinach pie, featured pleasingly emphatic feta inside flaky phyllo envelopes. Feta also figures effectively in a watermelon salad dressed with fig balsamic. This was a dish, ironically, that Furxhiu’s grandmother had to cajole him into eating as a kid. At Santorini, it is as refreshing as diving into the surf.

Disappointments were few, but the octopus in pesto, while tender, had slippery skin that should have been crisped. Appealingly herbaceous Greek chicken had a similar issue; you’d think five hours of roasting would fully brown the exterior, but the skin was pale and rubbery. Greek saganaki cheese, flambéed tableside in ouzo, looked appealing, but tasted less of anise than of burnt surfaces.

As for dessert, Santorini sources the majority from Italian-sweets behemoth Bindi. I’d suggest skipping them in favor of the two made in house: a supple tiramisu lively with cinnamon and a slice of the not-too-sweet crème brûlée cake. Furxhiu promises more house-made desserts in the spring.