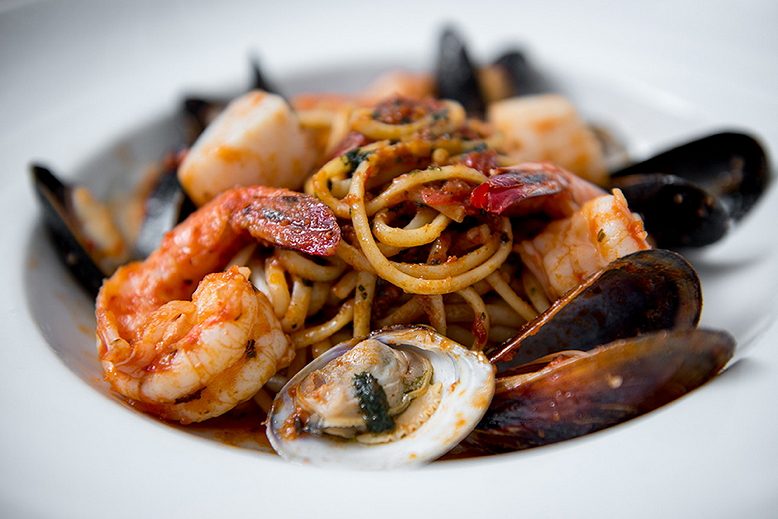 In dubbing itself “the nation’s oldest seashore resort,” the City of Cape May isn’t going overboard. Jersey’s southernmost beach town has drawn crowds since at least 1766, when the Philadelphia Gazette deemed it “a healthy place for sea bathing.” The restored Victorian architecture gives this National Historic Landmark town a charm like no other Shore destination. Cape May is also one of the largest commercial fishing ports on the East Coast—a boon for local restaurants. (Note: Many restaurants close for the winter. Some addresses are in West Cape May, Cape May Point or Rio Grande, a short drive from the heart of town.)

Here are our top picks for the best restaurants in Cape May, in alphabetical order.

Part of the appeal of the restaurant, opened in 1984, is the sultry ambience, with slowly spinning ceiling fans and dignified servers, and the bewitching stroll through a tropical garden to reach the front door. The Caribbean and Southern menu has a touch of the French Quarter. BYO.
410 Bank Street, 609-884-2127 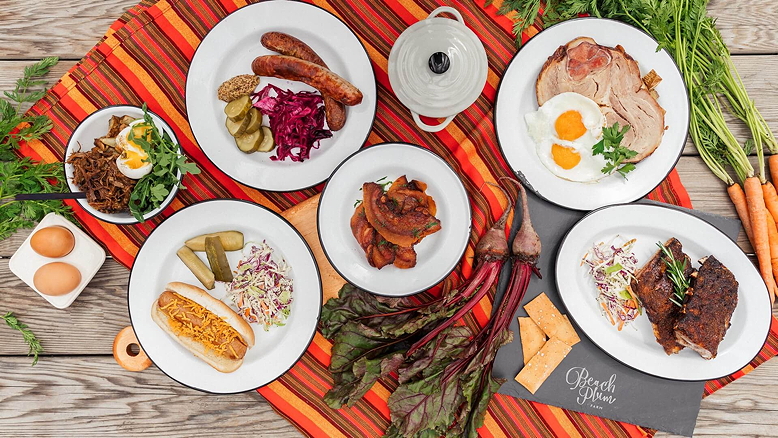 The setting is as much a draw as the food, which is why Beach Plum made our 52 Things You Must Do in New Jersey list. The farm, part of Cape Resorts, supplies fruit and produce to the group’s restaurants, among them the Blue Pig, Ebbitt Room and Rusty Nail. A four-day retreat offered at Beach Plum Farm gives guests the opportunity to get hands-on with the food they eat. BYO or buy wine at the farm.
140 Stevens Street, West Cape May, 609-972-8070 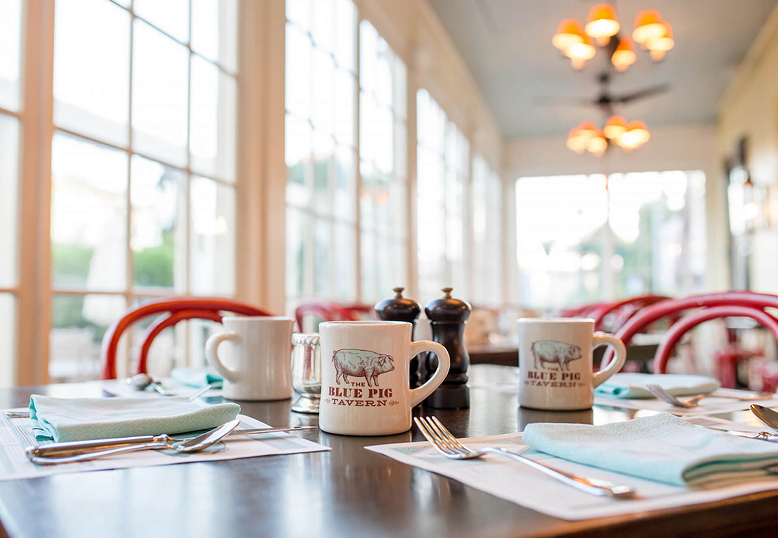 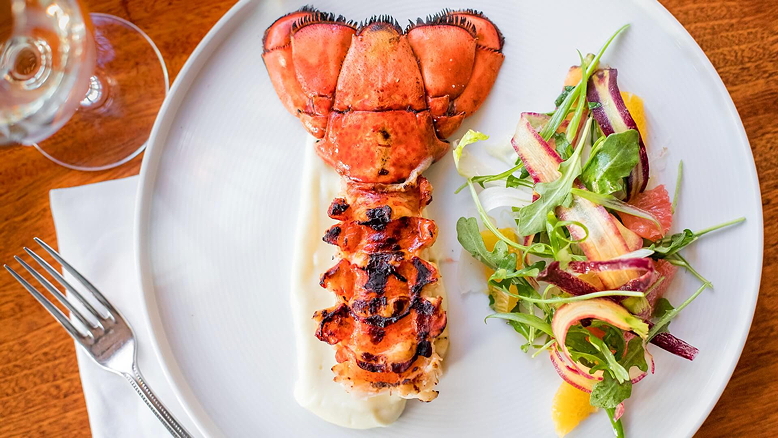 A slightly charred lobster tail with a bright side salad. Courtesy of the Ebbitt Room/Cape Resorts

One of the leading spots for fine dining in downtown Cape May, just a block from the pedestrian mall in the renovated 1879 Virginia Hotel. Despite the hotel’s Victorian trappings, chef Jason Hanin’s American menu (dinner only) is contemporary—strong on fresh-caught seafood, with steaks and a vegetarian option. Every dish utilizes fresh produce and fruit from Cape Resorts’ Beach Plum Farm just down the road.
25 Jackson Street, 609-884-5700

Jack Wright, a native Scotsman, grew up on curries. When a storefront next to his Exit Zero publishing company became available a few years ago, he turned it into a homey restaurant, Exit Zero Cookhouse. Today it has a new name, a liquor license and an all-American menu in addition to the popular old curries. No reservations taken.
10 Sunset Boulevard, 609-770-8479 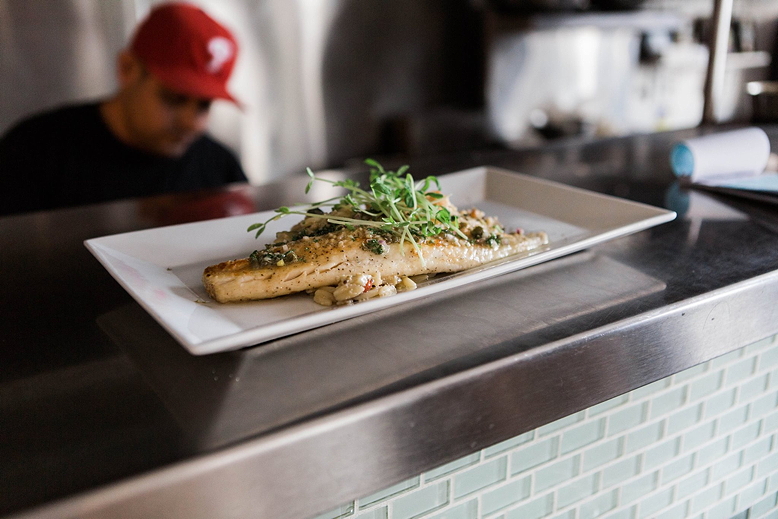 As a small corner storefront right by the beach, George’s Place doesn’t look like a diner, but it’s the real deal, and Greek at that. Pancakes, waffles, eggs and that South Jersey staple, scrapple, make for some of the best breakfasts in town. At lunch and dinner, the Greek heritage of owners Peter and Yianni Tsiartsionis is on proud display. BYO and cash only.
301 Beach Avenue, 609-884-6088

All eating regimens accommodated here. Virtually everything on the menu can be made gluten-free, and—apart from the scallop and fish entrées—nearly everything can be ordered vegan. Choose from soup, salads, flatbreads, pastas and more. BYO.
600 Park Boulevard, 609-898-6161

Vincenzo Sanzone named his restaurant for the Sicilian town where he grew up and learned cooking from his grandmother. Iccara nowadays is called Carini, but the spirit of Nonna’s cooking lives on at Sanzone’s BYO. Not that Grandma necessarily made dishes as lavish as Sanzone’s lobster with shallots and mushrooms in tomato cream sauce with squid ink fettuccine. Or crab cakes with lemon beurre blanc risotto. Or filet mignon with shallot butter.
311 Mansion Street, 609-884-0200


Jardin at the Hugh

Sandy and John Vizzone opened their inn, the Hugh, in April 2021, vowing not to do that local staple, the crab cake. Instead, with chef Michael Schultz, they’ve created an ambitious, locally sourced, French-influenced menu as pleasing to the eye as to the palate. It’s a special experience curated for just a handful of diners per night. The restaurant made our Best New Restaurants list in February 2022.
653 Washington Street, 609-435-5458 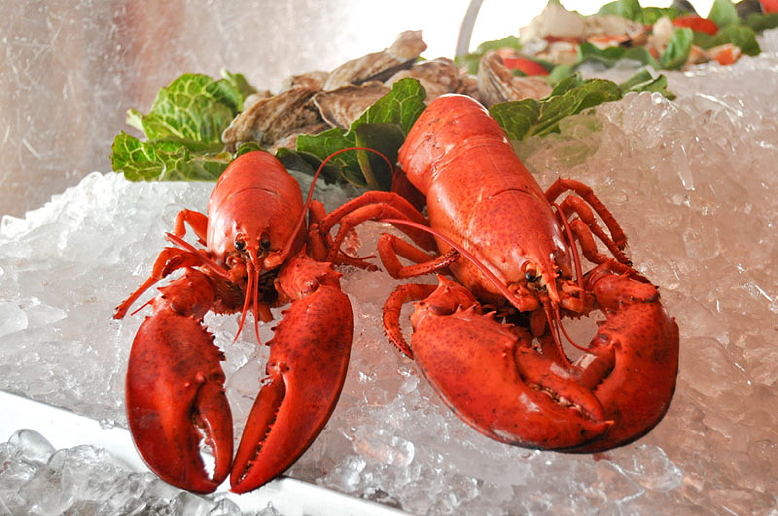 Indulge in fresh lobster when you arrive to Cape May. Courtesy of the Lobster House

When you cross the bridge over Cape May Harbor, entering Cape May, the first big thing you come to is the Lobster House. It sits dockside on Fisherman’s Wharf, with its own fishing fleet supplying, among others, its huge seafood restaurant with full bar, its fish market and raw bar. Weather permitting, from May to October, one can also enjoy cocktails and light lunch or dinner on the deck of the 130-foot Schooner American, moored alongside. The restaurant and market are open 365 days a year.
906 Schellengers Landing Road, 609-884-8296

With only 34 seats, there may be a wait; the menu is limited to seafood (with salads, soup, a few sides and no meat); and it’s cash only. But hold on. The simply prepared food and genuine hospitality have been winning loyalists since the place opened in 1980. Desserts are a strong point, and portions (of everything) are generous. BYO.
104 Jackson Street, 609-884-5882

The Craig family, owners of the nearby fine-dining Washington Inn and the Cape May Winery, saw an untapped market for high-quality, reasonably priced, family-friendly dining, and created the 150-seat Lucky Bones in 2006. Open year-round, it offers crisp brick-oven pizzas, crisp Buffalo wings, creamless clam chowder, steaks and chops, and a full bar. But seafood is Lucky Bones’s forte, as befits its perch at Cape May Harbor.
1200 Route 9, 609-884-2663

Pancakes, French toast and mimosas, thy name is Mad Batter. Ask anyone in line on a Sunday morning. But, in fairness, there is much more (like full-menu breakfasts, lunches and dinners) to this OG of Cape May’s ’70s revival, fueled by gingerbread-happy Baby Boomers. The Batter opened in ’76 in the Carroll Villa Hotel and has been booming ever since. Dinner is eclectic, from chorizo paella to Tuscan fettuccine. There’s a kids’ menu and, keeping up with the times, a gluten-free one as well.
19 Jackson Street, 609-884-5970

The Magnolia Room at the Chalfonte Hotel

90-something cook Lucille Thompson follows in the footsteps of her mother and grandmother, both legends at the hotel, built in 1876. Lucille is known for her creamy/crusty dinner rolls, and for maintaining the quality of her mother’s fried chicken, collards, lemon meringue pie and other Southern staples that reach deep into the Chalfonte’s history.
301 Howard Street, 609-884-8409 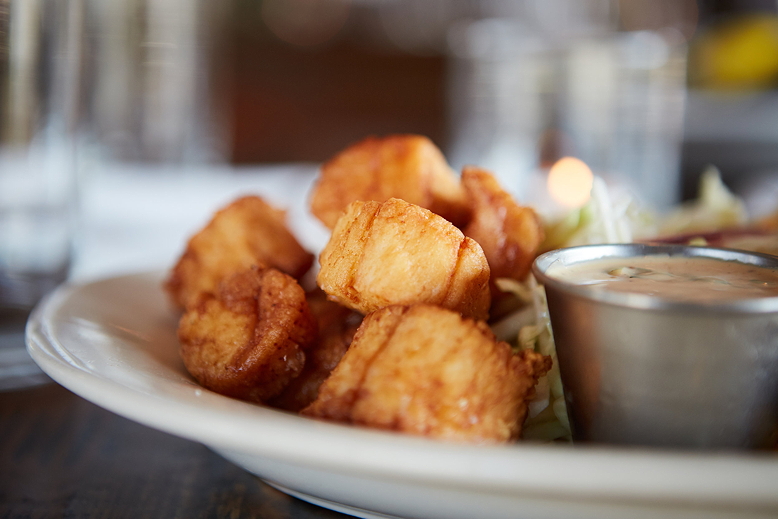 Once billed as among the best dive bars in America, Mayer’s reopened in 2018 under new ownership after a two-year renovation. Its attitude under chef/co-owner Alex Laudeman—her great-great-grandfather ran party boats in what became Cape May Harbor—brings to mind the old TV series Cheers. Kick back with a Dark ’n’ Stormy, margarita or rum and ginger beer, then dig into fried calamari, a cold shellfish tower or a burger with Dijon mayo. Arrive early to grab a table on the porch and revel in the sunset.—Lynn Martenstein
894 3rd Avenue, 609-435-5078

One of the grand dames of Cape May, the Inn, with its canopied porch and ocean view, is formal but friendly and old-school romantic. That holds when you sit down to dinner as well: Service is gracious and solicitous. Executive chef Carl Messick’s New American fine-dining menu is posh—generous in flavor and portion.
1301 Beach Avenue, 609-884-9090 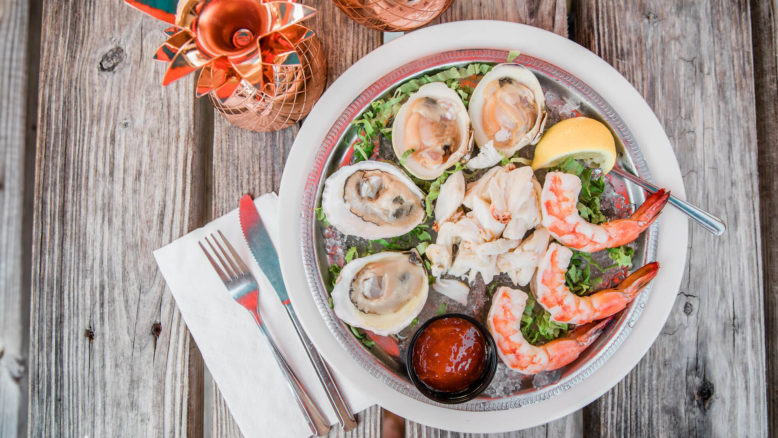 Breakfast, lunch and dinner at a reincarnated beach bar in sight of the beach is how the Rusty Nail hangs its hat. The surfer vibe holds at the outdoor fire pit in summer, and at the indoor fireplace when the weather cools. The fare is familiar—chili, chowder, quesadillas, burgers and wraps at lunch; all that plus stuffed flounder, chicken Parm and the like at dinner. Add specialty cocktails, wine, beer and Monday pig roasts in summer, and you’ve hit the nail on the head.
205 Beach Avenue, 609-884-0017

Founded in 1988 in Wildwood by Letitia “Tisha” Negro, this BYO moved to Cape May in 1995 when Tisha’s son Paul and his wife, Jennifer, took over. They are still serving sophisticated dinners—grilled salmon and shrimp with Thai chili sauce; short rib Bolognese with pappardelle—in a gracious setting. Lunch ranges from a variety of burgers, po’ boys and wraps to salads and risottos.
322 Washington Street Mall, 609-884-9119

Built in 1846, the stately home at the north end of town became an inn in 1940, but didn’t come into its own as a dining destination until the Craig family bought it in 1979. Mimi Wood, its chef since the mid-’90s, keeps the largely American menu upscale, as befits the setting, and modern—with several gluten-free options and one vegan option. The inn’s ace in the hole just might be its wine list, by far the most extensive in Cape May.
801 Washington Street, 609-884-5697