Students enjoy a sunny break from classes outside the Pitkin Education Center, the main academic building at Bergen Community College in Paramus.
Photo by Frank Veronsky

On an afternoon in July, the West Windsor campus of Mercer County Community College bakes in the summer sun. On the quad, a few hardy students brave the heat, gathering at outdoor tables in the leafy shade. Nearby, a group of kids from Camp College—a summer enrichment program for ages 6-16—take an outdoor break, their enthusiasm muted by the rising mercury. Suddenly, the torpor is broken by a string of young adults in identical dark-blue T-shirts and trousers—recruits from the on-campus police academy—jogging single file toward the student center.

It’s a perfect snapshot of the multifaceted nature of the state’s 19 community colleges (also known as county colleges), whose shared mission is to fulfill the diverse educational needs of the 21 counties they serve. All offer a variety of non-credit options and certificate programs, as well as a two-year (60-credit) associate degree, which can be applied toward a bachelor’s degree at a four-year institution. Their mandate—established by the state Legislature in 1962 with the founding of New Jersey’s community-college system—is to make available an open-access, low-cost postsecondary education to all residents of the state.

The open-access concept sets New Jersey’s community colleges apart from traditional four-year institutions. The only qualification for admission is a high school diploma or G.E.D.

Residency—in the state or county—isn’t a requirement for community college admission, but tuition for nonresidents is generally higher. Nevertheless, the colleges offer striking tuition savings to all students compared with four-year institutions.

Consider that, for the 2016-17 academic year, the average cost of tuition and fees at a private college in the United States was $33,480 (rising to more than $50,000 at some schools). For New Jersey residents attending a state college, tuition and fees averaged $13,464. Tuition at the state’s community colleges, on the other hand, averaged $4,723. That means that a student who attends a community college for two years, then transfers to a state or private institution, could save $60,000 or more on a bachelor’s degree.

In an era of rapidly escalating education costs and mounting student debt, the financial advantage makes community colleges attractive to a growing number of students across the economic spectrum, but particularly those from immigrant and working-class families. In fact, New Jersey’s community colleges serve 51 percent of students in the state on the path to a degree. That’s more than New Jersey’s four-year private or public institutions, which serve 11 percent and 38 percent of degree-bound students, respectively. Similar percentages prevail across the country. The colleges also partner with industry to train students for jobs that might otherwise go unfilled—a boon in a still uncertain state economy.

Increasingly, New Jersey’s community colleges are partnering with four-year schools to smooth the path to a bachelor’s degree. Students at Camden County College, for example, can automatically transfer to Rutgers University-Camden’s off-campus program as long as they graduate with a 2.5 GPA or above. Nursing students at Middlesex County College can take 88 credits and become registered nurses, then transfer to Kean University to finish the remaining 37 credits toward a BSN degree.

But for all that they offer, community colleges face daunting challenges, including chronic underfunding, which could push tuition higher, and graduation rates that virtually everyone agrees could be better. Given the importance of community colleges to the state’s social, business and educational landscape, their continued viability and improvement should be of paramount interest, not just to New Jersey students and parents looking for a way to rein in college costs, but to anyone interested in the growth of the state’s economy. 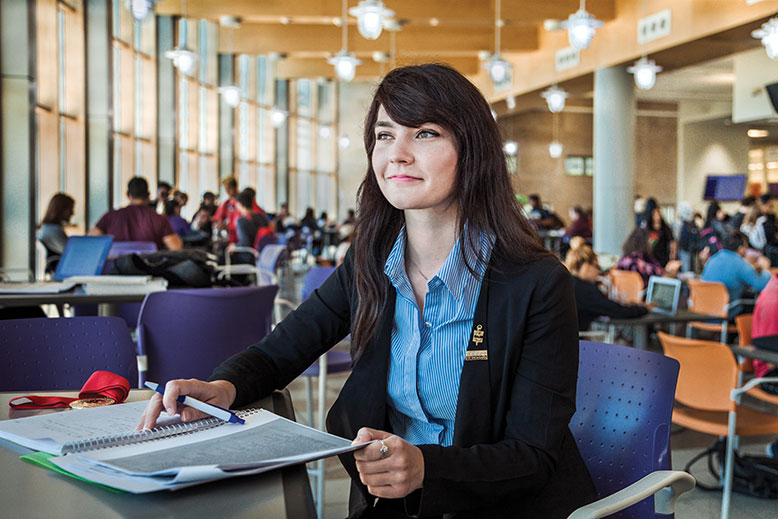 Amanda Karpinski entered Bergen Community College straight out of high school and now plans to move on to a four-year college and eventually law school. Photo by Frank Veronsky

According to a recent survey conducted by Boston-based public radio station WGBH, 75 percent of students attending a community college cite affordability as a factor in their choice. That’s true for Amanda Karpinski, a 20-year-old from Carlstadt now in her third year at Bergen Community College in Paramus.

In high school, Karpinski knew she wanted to stay in New Jersey for college. She looked at a variety of local schools, including Ramapo College and Seton Hall University, but she says she never felt “that click”—that sense of a perfect fit. Her family couldn’t cover the full cost of a four-year college, and she was reluctant to take out a large loan to finance an education she didn’t feel passionate about. So when she discovered that she qualified for NJ STARS—a scholarship program for high-achieving high school students that covers the full cost of tuition at the community college in the county in which they live—she applied to Bergen Community.

Still, the click wasn’t instantaneous. “I was very affected by the stigma surrounding community college,” she admits. But Bergen won her over. She got involved with Phi Theta Kappa, the community college honor society, and met a group of smart, ambitious fellow students. She found her professors knowledgeable and approachable. Earlier this year, she was elected international president of Phi Theta Kappa. And in 2018, she’ll receive her associate degree, after which she plans to transfer to a four-year college and eventually go on to law school. With the money she has saved on her first 60 credits and the scholarships she’s hoping to receive based on her performance at Bergen, “I won’t have to ask my family for financial help,” she says. 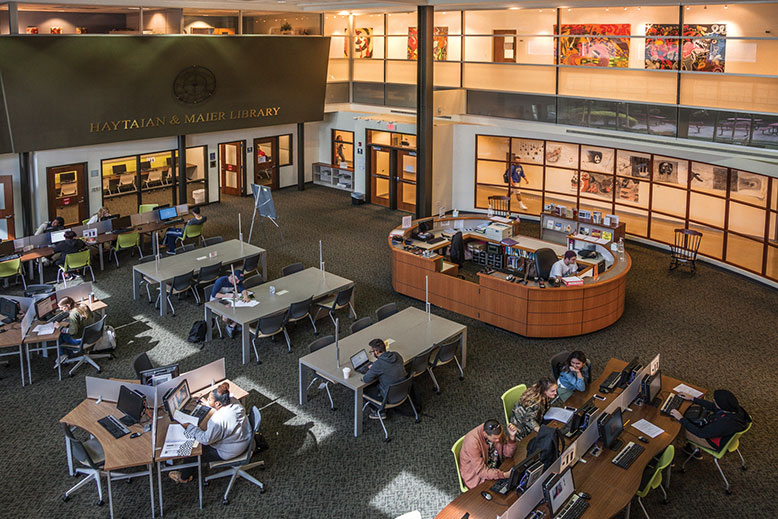 Students prepare for their classes in the library at Warren County Community College. The Washington Township school has increased its graduation rate in part by cutting back on remedial classes and putting greater emphasis on success. Photo by Frank Veronsky

One of the scholarships Karpinski is hoping for could come from the NJ STARS II program, which offers transferring students up to $1,250 per semester to help defray the cost of tuition at many in-state four-year colleges and universities. Though they benefit thousands of students, both NJ STARS programs have been the victims of budget cuts during the past decade. In 2008, the eligibility requirement for a community-college scholarship was raised from graduation in the top 20th percentile to the top 15th. And in 2012, the upper limit of transfer scholarships was slashed from $7,000 per semester to $1,250.

While nothing precludes further cuts, there is reason for hope: A bill that would restore eligibility to the top 20 percent of high school graduates and increase transfer scholarships to $2,000 per semester passed the Senate and is now before the Assembly.
Beyond diminished student aid, the other threat to the affordability of the state’s community colleges is rising tuition. Over the past academic year, tuition and/or fees have increased at 16 of the 19 colleges—in large part because of underfunding. “New Jersey’s community colleges are the most severely underfunded colleges in New Jersey,” says Lawrence Nespoli, president of the New Jersey Council of County Colleges.

Funding, Nespoli explains, flows largely from three sources: the state, the counties and tuition. Even as educational costs at the colleges have risen, the state’s contribution has remained flat for the past eight years and is actually lower than it was in pre-recession 2008. Meanwhile, thanks in part to Governor Chris Christie’s cap on property taxes, some counties no longer have the wherewithal to make up the difference. And funding from tuition is down because enrollment is down—a nationwide problem that, ironically, reflects a recovering economy.

“Community-college enrollment always goes up with the unemployment rate and always goes down when the unemployment rate drops,” says Will Austin, president of Warren County Community College. That’s because, when unemployment is high, even employed families worry about college affordability and look to community colleges as a way to save on higher education. In addition, unemployed workers—or those who fear losing their jobs—flock to community colleges for retraining during tougher economic times.

There are no easy answers to the funding issues. In 2016, the National Center for Higher Education Management Systems (NCHEMS) studied higher-education funding in New Jersey and recommended that the state increase its annual operating aid to community colleges to help the colleges hold the line on tuition. There has been no move from Trenton to do that (Christie line-item vetoed a $6 million aid increase proposed for the current budget). Nor is there any inclination of something even more controversial and, presumably, costly: free community-college tuition for all.