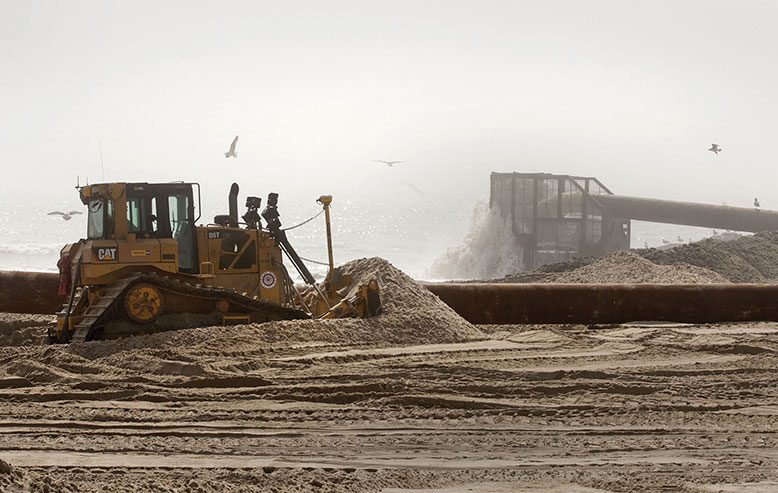 Heavy machinery replenishes the beach in Ship Bottom on Long Beach Island in May 2015.
Photo courtesy of Asbury Park Press.

The Jersey Shore Partnership has a mission that is essential to the state’s economy—as well as to the lifestyle of those of us who live or vacation at the Shore. The 25-year-old nonpartisan advocacy group’s task:  to ensure state and federal funding to protect New Jersey’s 127 miles of coastal shoreline.

Our beaches bring in more than $20 billion annually in tourism revenue—more than half the entire state’s tourism dollars.

After Hurricane Sandy, and with the threat of severe storms increasing, the not-for-profit Partnership’s dedication to raising awareness and funds for our beaches is more important than ever.

I spoke with Margot Walsh, executive director of the Partnership, about the group’s efforts to protect the Shore.

Steve Adubato: What are the roots of your organization?
Margot Walsh: The Partnership was formed following two very serious storms back in 1991 to ensure there would be state and federal funding going forward for storm-ravaged Jersey Shore municipalities. Senators Joe Kyrillos and Bill Gormley pushed forward the legislative effort for a $15 million Shore Protection Fund, the first such legislation to be passed in the nation. A few years later, that amount was increased to $25 million, where it stands today. This funding has proven to be a smart investment for the state through a shared partnership with the federal government that typically provides 65 percent of the replenishment costs to the state’s 35 percent.

SA: How has your approach toward beach replenishment changed since Hurricane Sandy?
MW: We learned we had to be more proactive than reactive in terms of the anticipated increase in the number of Sandy-like storms. We used to think these were 100- year storms, but now we know that is not true. The governor’s office and the state Department of Environmental Protection have taken a more active role for statewide coastal protection to comply with the governor’s and the Army Corps of Engineers’ requirement for dune construction that better protects properties from loss.

SA: What happened with the U.S. Department of the Interior’s proposed offshore drilling plan?
MW: It was withdrawn due to the great work of environmentalists including the Partnership, as well as municipalities and the state’s congressional delegation. Simply put, offshore drilling off the Atlantic coast is too risky, and we have seen with other oil spills the long-term impact it can have. Fortunately, there was so much opposition to the plan that the President took it off the table.

SA: What are your views on global warming and rising seas? Is this a losing battle?
MW: Data for the last 100 years has shown us that there is reason to accept that there is sea-level rise and global warming. The U.S. Army Corps of Engineers are continuing to focus on beach replenishment to address rising seas. Even if you can’t see the sea level rise, it is happening. It is a coastal conundrum because there is so much development along the coast, so retreat [as a solution] is not really likely, since people continue to be drawn to the coast to live. We all need to do our part to protect our environment in an effort to reduce global warming.

SA: What does the future hold for the Partnership?
MW: We have a challenge in making sure our funding levels are realistic and can meet the new complexities of Shore protection. The NJ DEP has identified that the current $25 million Shore Protection Fund is not sufficient to meet future matching costs of beach-replenishment projects, so there are currently two bills—one in the Senate (S311) and one in the Assembly (A2954)—to increase the Shore Protection Fund to $50 million annually.