Porckhop stands next to his 20-foot mural “Ruthie &amp; Andre” that he painted for the Wooden Walls Project. Photo by Frank Marshal

Asbury Park beachgoers pass through the bustling, historic Convention Hall during an afternoon stroll. Emerging from the north end, they are bathed in sunlight and salt air. Then comes the surprise: a 20-foot mermaid painted on the side of Sunset Pavilion. Resting on a coral reef, the mermaid looks toward the Atlantic through a telescope as a seal frolics near her fin. The tourists stop to admire the artwork and capture photos on their phones.

“If you’re used to seeing just a wall being a wall, and then all of a sudden there’s art on it, people get excited,” says Mike “Porkchop” LaVallee, the local artist who created the seascape, titled Ruthie & Andre (Ruthie is the mermaid,  Andre is the seal).

The mural is one of 28 created for the Wooden Walls Project, a public-art initiative started in 2015 by curator Jenn Hampton, who owns Parlor Gallery on Cookman Avenue, and Madison Marquette, the real estate development company behind the rejuvenation of the Asbury Park boardwalk. The work of 24 local, national and international artists covers Sunset Pavilion on the north end of the boardwalk and the Casino to the south. Five more murals are expected to be installed this summer. “It brings the artwork out of the galleries and puts it on the street,” says Porkchop. “Everybody sort of can enjoy it.”

After spending years nailing his art to abandoned buildings around town, Porkchop painted his first officially sanctioned mural in 2009. On a wall in the Casino, he created an octopus lady draped in pearls with a flapper-style headpiece.

Walking around Asbury Park today is like participating in a scavenger hunt. Art pops up in unexpected places. The most prominent artist is perhaps Porkchop, whose public art appears all around town.

Next to the octopus lady in the Casino there is a squid woman surrounded by fluorescent jellyfish. Both creations are currently covered due to structural tests, but peepholes allow visitors a glimpse.

Several blocks from the Casino, a giant woman holding a miniature lighthouse breathes new life into Asbury Lanes, a performance venue and bowling alley that reopened this summer. On the corner of Bond Street and Cookman Avenue, a nature scene with pink flowers, blue birds and a woman’s face energizes the gray building’s exterior.

Not everyone thinks the murals are a great idea. Porkchop hears concerns that they encourage graffiti. “That’s not how it works,” he counters. “It actually stops graffiti. There’s some artistic respect. [Other artists] will be like, That’s cool, I’m not gonna go over it, it’s your spot.”

Murals have long been part of the Asbury Park streetscape. In 1955, twin grinning faces nicknamed Tillie were painted on Palace Amusements. The amusement park closed in 1988, but a recreated Tillie smiles from atop the Wonder Bar, across the street from the beach. Madame Marie’s fortune-telling booth, the Temple of Knowledge—immortalized in song by Bruce Springsteen—has been a boardwalk mainstay since 1932. An eyeball, crescent moon and stars originally decorated the small building. A few years ago, the mural was redone. On a wall in the Casino, Porkchop created an octopus lady draped in pearls with a flapper-style headpiece. Photo by Frank Marshal 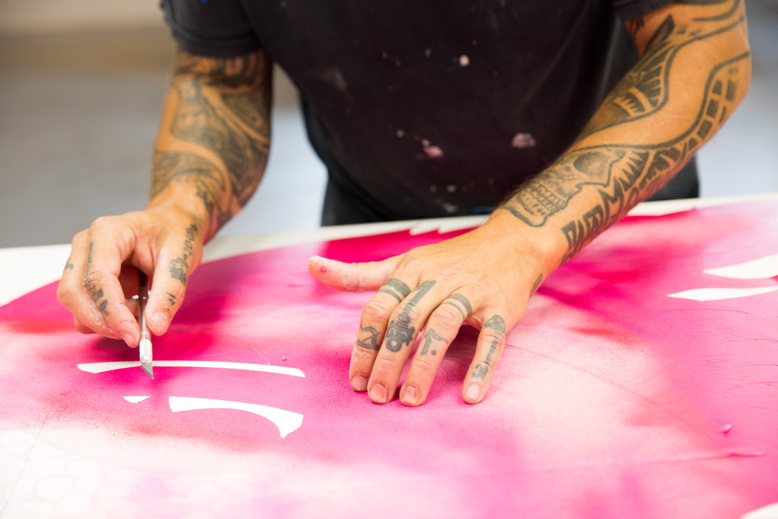 A Porkchop creation on the corner of Bond Street and Cookman Avenue. Photo by Frank Marshal

Public art contributes to Asbury Park’s character, and is a reminder that, while the town is best known for its music scene, and lately, its restaurant scene, the art community also has had a role in the Asbury Park renaissance.

One key figure in the redevelopment is Pat Schiavino, a self-taught artist who moved into his Cookman Avenue studio and gallery space in 2000.

“Everything was boarded up, but I felt this tremendous energy here, like the buildings were talking to me,” he recalls. He believed in the town’s potential and became a real estate agent and developer.

“It had to come back,” says Schiavino, a lifelong New Jersey resident. “What made the place great the first time makes it great the second time. We had a beach, we had a boardwalk, we had a downtown, we had a transportation center, we had a tremendous history, we’re an hour outside of Manhattan.” The only problem? “Nothing had been done here for so long,” he says. In some ways the growing tourism in Asbury Park—and rising rents—have hindered the local art scene. When Hampton moved to Asbury Park 14 years ago, there were eight galleries in town. Now there are just three of note: Art629, Parlor and Exhibit No. 9, opened by artists-in-residence Tom and Lois White in August 2013.

This summer, all three galleries are staging fresh exhibits. At Art629, “The Portrait” will feature interpretations of the human face by artists working in various media. Parlor will host Jonathan LeVine, who operates out of a gallery at Jersey City’s Mana Contemporary. LeVine and Hampton will co-curate an exhibit. Exhibit No. 9 will display “Take Me Deep,” an exhibition exploring our connection to the sea and beginning this month, an ongoing exhibition introducing new artists called “Persons of Interest.”

Between gallery exhibits and the Wooden Walls Project, Hampton hopes to make art accessible and approachable for everyone in Asbury Park. She’s working on adding a museum component to the Wooden Walls in the Carousel building. Weathered murals could move into retirement indoors. Artists like Porkchop could work in the space and field questions from curious visitors.

Ricci, co-owner of Parlor, has noticed an uptick in gallery visits the last few years. 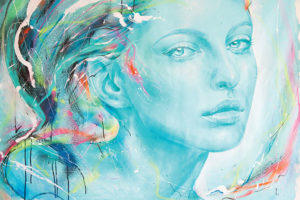 A painting on canvas by Brazilian artist Thiago Valdi, who also has a mural on Sunset Pavilion. Photo by Frank Marshal

“It seems like there’s a more savvy art collector moving here now or visiting. We’ve been getting a lot of Manhattan, Hoboken, Jersey City and Brooklyn people,” says Ricci. “There’s definitely a buzz.”

That energy continues into the off-season with Asbury Underground, an annual fall culture crawl through the downtown. Schiavino, a former talent buyer at Sayreville’s Club Bene, founded the festival in 2013. “The musicians have an attentive audience, the artists get exposure, and businesses boom that day,” says Schiavino. “Over the past four or five years, it’s just been like a locomotive.”

At last year’s festival, 100 local musicians performed in galleries, businesses and restaurants throughout town. This year’s festival is scheduled for October 13.

“I want to help this downtown to remain an art and music destination because I can see it quickly changing into a bar crawl every night,” says Schiavino. “I really want to keep the integrity intact of what made us really special.”