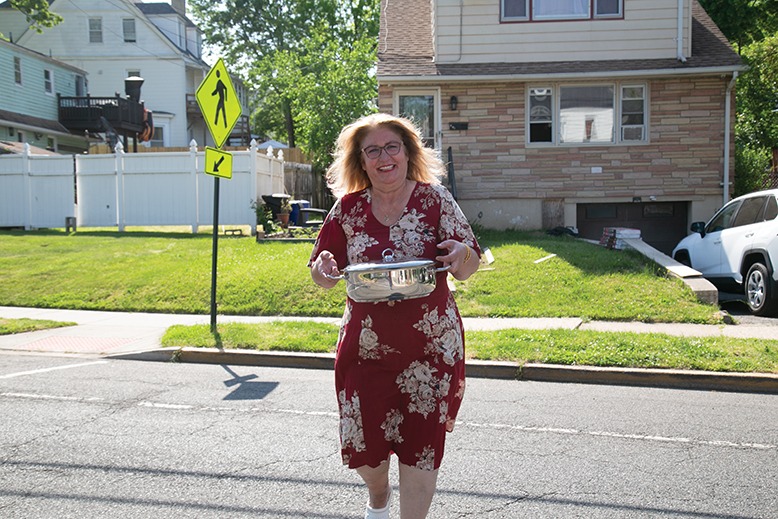 Belgin Hüdür crosses the street from her home to Belgin’s Deli, which she runs with her husband, Eddie, carrying a pot of firinda tavuk, a robust chicken stew that is one of her prized Turkish specialties. Photo by Laura Baer

On Broughton Avenue in Bloomfield, in a neighborhood of neat clapboard houses, a woman makes her way down her front steps, carefully carrying a large stock pot.

Middle-aged, with auburn hair tied loosely in a head scarf, she crosses the street toward the corner store and pauses under the red awning spelling its name, Belgin’s Deli. Inside, a spry, gray-haired gentleman darts for the door—and in a swirl of lemon and garlic, cumin and thyme, she steps inside.

The woman is Belgin (bel-JEEN) Hüdür; the spry gent is her husband, Edip, known as Eddie. They opened the place last August in a burst of pandemic-defying optimism that has won a local following. The pot contains one of Belgin’s specialties, firinda tavuk, a hearty Turkish stew of chicken braised with potato and onion. That Belgin would one day become a compelling cook was not always evident. When she was 15 and Eddie was 19, they married in their hometown of Adana, a city in southeastern Turkey. Belgin Agirbaser did not have much interest in cooking, but Eddie was happy to eat whatever she put in front of him. “I didn’t care,” he says. “I loved her, and she was trying.”

Eddie’s family, on the other hand, had…concerns. So Belgin enlisted her mother and grandmother—the latter, her secret weapon—to teach her how to cook.

They proceeded cautiously. One of the essentials was kibbeh, traditional bulgur patties stuffed with ground lamb. Meat of any kind was far too precious to experiment with, so for her first attempts at forming the football-shaped patties, the designated medium was mud. Before long, she graduated to the real thing.

Another rite of passage was the making of dolma, finger-sized packets of rice and ground meat wrapped in grape leaves. “When it was time to make the dolma,” says Eddie, translating for Belgin, whose English is limited, “we’d call around to the neighbors, and everyone would come over and have a cup of coffee, and then we’d roll grape leaves all day.” In time, people in the neighborhood would associate the name Belgin Agirbaser with masterful renditions of regional cuisine.

Eddie came to America first, in 1990. Belgin and their three children joined him in 1996. That year, they opened a restaurant in Cliffside Park called Saray (which means Mansion). It lasted until 2000. For the next few years, Eddie says, Belgin cooked at a Sam’s Club in Secaucus, becoming its head baker, and sometimes worked as a crossing guard in Ridgefield.

A year ago, Belgin and Eddie were living in Bloomfield. Their three sons and one daughter were grown, and except for video chatting with their three grandchildren, Belgin was bored. She dreamed of opening a place of her own. To Eddie, who teaches English as a second language at Essex County Community College in Newark, that seemed far-fetched. His own dreams leaned more toward long-distance excursions on his BMW motorcycle.

Then one day, Belgin saw a “for rent” sign on the corner storefront across the street. Eddie grudgingly made the call. To his relief, he was told the place had already been rented. A few weeks later, though, the sign was back up. This time, Belgin asked one of her sons to make the call, and he closed the deal. The food at Belgin’s is Turkish home cooking—literally. Belgin cooks everything in her house and carries it across the street. Her stuffed cabbages, neat little packages of lamb and rice, are lightened with a bit of fresh mint. To make her exquisite baklava, she spreads crushed walnuts and sugar syrup over paper-thin sheets of phyllo, then adds another layer, and another, until there are 60 in all.

Despite his initial skepticism, Eddie is clearly Belgin’s biggest fan. “It’s all her—I am nothing,” he protests. “I just try to help,” he says about six times, as Belgin shakes her head, amused.

Belgin’s is a good place to sit with a slice of that baklava and a cup of robust Turkish coffee or tea, peruse the shelves stocked with Turkish pantry staples, and consider it all, in the fullest sense, as the culmination of a lifelong journey.