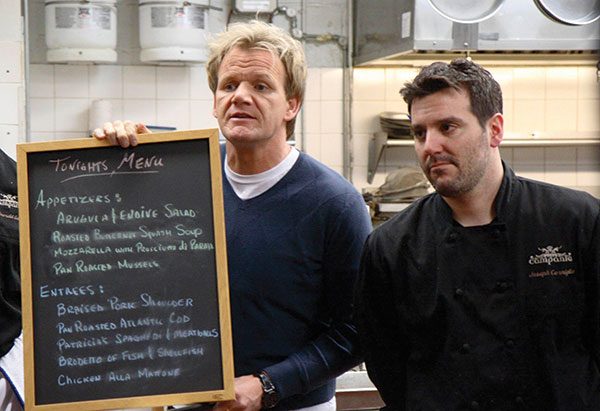 After five decades in the restaurant business, Adele and Bill Csepi thought they knew what worked. But last winter they couldn’t deny that their 3-year-old tropical-themed restaurant, Flamangos in Whitehouse Station, was foundering for lack of customers. So Adele sent an e-mail to the Fox series Kitchen Nightmares, which she’d heard was scouting in the area, and invited its cheeky, sardonic host, English chef Gordon Ramsay, to diagnose the problem and help fix it.

When Ramsay and the crew showed up in May, the brassy, 42-year-old chef immediately identified a disconnect: a 19th century stone structure next to a railroad station in a bucolic Hunterdon County town—with a tropical theme? As Ramsay put it to Adele, “What possessed you?”

One thing restaurateurs who seek a Kitchen Nightmares solution have to be prepared for is radical change practically overnight. The whole episode is filmed in a matter of days. One day Flamangos had pink walls, rattan chairs, bamboo, and jungle-foliage upholstery and wallpaper. The next day, all those were gone, replaced by powder blue-and-white vinyl-covered seats, an ice cream and milkshake bar in place of the raw bar, a country look with square instead of round support columns, and a new openness brought about by the removal of the wall separating the bar from the dining room.

Flamangos also got a new name, the Junction, and a common Ramsay prescription: a smaller, simpler, and lower-priced menu (top entrée $20 instead of $36), with a big helping of comfort food (oven-roasted lemon chicken, babyback ribs, meatloaf, banana split). The Csepis have mixed feelings about the changes. They like the new name and most of the new menu—the decor, not so much. They quickly stowed the new blue-and-white chairs, which they (and many customers, they say) thought evoked a diner, in favor of sedate, dark-wood models. They found the crew’s workmanship shoddy.

“They put carpet down that wasn’t even glued, it was thrown,” says daughter Cheryl, who manages the restaurant. “People were tripping on it.” The family also is redoing the show-designed Junction logo, which they liked, but “it made people think we’re a Chinese restaurant,” Cheryl says. Response from customers so far has been mixed, with some regulars put off (not that there were ever enough of them) and some new patrons attracted by the changes. The family doesn’t know what to expect when the episode airs on Fox this fall. Ask Adele if she regrets sending that SOS e-mail, and she has to think for a second.

“We knew we had to make a change,” she replies. “I would never have gone this drastic. We built everything; I didn’t see knocking it down. But he tried to show us that this is a business decision, not emotional.”

The Garden State seems to be fertile ground for Kitchen Nightmares. In addition to Flamangos, the upcoming third season will include an episode shot at Bazzini’s in Ridgewood. In each of its first two seasons, the series visited a Jersey restaurant. After being featured in season one, Joe Cerniglia, owner of Campania in Fairlawn, felt his business had been saved from drowning. But after Hannah & Mason’s in Cranbury received a makeover in season two, Chris Posner, the owner, felt he had been thrown a curve, not a life preserver.

In 2006, Posner and his business partner, Brian Kelly, bought Hannah & Mason’s, a French-style bistro where Posner had been chef since 2003. Last year, according to Posner, the two became at odds with each other, and the restaurant started losing money. The operation’s catering arm was keeping things afloat, but not enough customers were dining at the restaurant. Posner, like other owners who have sought a spot on Kitchen Nightmares, thought he could play good cop to Ramsay’s bad cop. “When I filled out the application,” Posner says, “I said I wanted to light a fire under my partner’s ass, and who better than Gordon [to do that]?”

Having seen the first season of Kitchen Nightmares, Posner knew the tone would not be all peaches and cream. “I had a lot of people asking me, ‘Don’t you think you’re making a mistake?’” he admits. “My argument was that they had 22 million viewers last year. If 21 million are turned off by what they see, I’ll still take it.”

Ramsay and the TV crew arrived at lunchtime on Valentine’s Day, 2008. Posner prepared for him some of the restaurant’s most popular dishes. In a scene common to other episodes of the series, Ramsay, lo and behold, disliked them all. Posner seemed shocked, but Marie Milito, the waitress who served Ramsay, saw it as the series’ M.O. “After we talked it over,” she says, referring to Posner, “he went, ‘I guess you’re right. If he liked everything, they wouldn’t have a show to do.’”

That night the restaurant was packed for Valentine’s Day. A few customers who hadn’t gotten the message that they would be on TV, and who wanted no part of it, scrambled for someplace else to eat. In the middle of service, Ramsay confronted Posner with a container in which raw and cooked chicken had been stored together. Posner declared on camera what he maintains today, that he had no idea where it had come from.

When Ramsay announced he was shutting down the restaurant at once (“This is a Valentine’s Day Massacre! You’re going to kill somebody!”) and stretched yellow caution tape across the kitchen, “99 percent of the customers laughed,” Posner says. “They were having a good old time [being on TV].” But for his part, “I thought, Oh s—, they had the Valentine’s Day Massacre written weeks ago. If it wasn’t Hannah & Mason’s it was going to be someone else. I said, ‘We’re in it; we signed contracts. Let’s just roll with it.’”
Asked if the show had planted the unsanitary food, Kent Weed, an executive producer of the series, and also of Hell’s Kitchen, its British forebear, responded, “We don’t have to go looking for [poor conditions]. It always amazes me that these people know we’re coming and still have dirty kitchens.”

Like other restaurants on the series, Hannah & Mason’s received a menu-and-mortar makeover—in its case, a country café look and more casual fare emphasizing local ingredients. Posner (and his customers, he says), hated the changes. He reverted to the old menu and decor months before the episode aired. He thought the telecast might bring him new business, but it only produced phone calls from fans of the show chastising him for not taking Ramsay’s advice. Citing the loss of corporate catering business in the nosediving economy (it had been half his revenue, he says) Posner closed Hannah & Mason’s in January of this year, though he says the show had little or no effect on the decision.

“Any restaurant that embraces Gordon’s changes has done well,” observes Weed. “I haven’t seen as much success if they go back to their old ways.”

Joe Cerniglia was helping the casting company scout restaurants for the first season of Kitchen Nightmares when he decided to propose his own place, Campania in Fairlawn, as a candidate. He had bought the Italian restaurant in 2005 but was losing money. Like Posner after him, he thought Ramsay would spur changes he couldn’t pull off on his own. “If I did it without him, I would have incurred a lot of fallout [from regulars], and I thought it would be the kiss of death for me,” he says.

He wound up with a near-death experience. On camera in the dining room, with customers around, Ramsay criticized the huge portions Cerniglia, a self-taught chef, was serving and said they made no economic sense. This led to an on-camera shouting match, but in the end Cerniglia came around to Ramsay’s point of view—that he was losing money because his menu was too big, meaning a lot of unordered food was going to waste, and because portions were excessive.

As part of the menu makeover, Ramsay and Cerniglia collaborated on a recipe that Ramsay suggested Campania bill as “New Jersey’s best meatballs.” Cerniglia put them on the menu as a spaghetti-and- meatball entrée and as a side dish, and they continue to sell well. “The most important change was streamlining the menu, going from this encyclopedic menu to a nice, two-page menu focusing on seasonal picks. Overall, it helped our food costs and execution. That was the most important change,” Cerniglia says.

“I almost feel guilty about how well it worked out for us. I’m just extremely grateful we had the opportunity, and it was exactly what we needed to really get us from losing money to breaking even to making money now.”

Although the notoriety of being on TV did nothing for business at Hannah & Mason’s, it’s a different story at Campania. “Not a night goes by,” says waitress Katie Keppel, who was featured in the episode, “that a table doesn’t ask about the show.”

Joel Keller is a freelance writer and editor-in-chief of AOL’s TV Squad blog.

Jersey Lightning: The Laird family of Scobeyville has been distilling applejack a long time. How long? They once gave George Washington the recipe.