The kitchen renovation of Don Davidson and Sarah Stanley’s historic Chatham home achieved many goals, but top priority was to have all the appliances in one room. Mission accomplished! Photo by John Bessler

Don Davidson and Sarah Stanley met at an annual gathering of steam-automobile collectors. Davidson, a widower, was there with his 1913 Stanley Steamer. Stanley was representing her family; her great-grandfather and his twin brother founded Stanley Motor Carriage Company in 1902. Davidson took her for a ride and the pair hit it off. “There were no Stanley Steamers in my family since my grandfather owned one, until I married Don,” says Stanley. After marrying in 1996, Stanley joined Davidson in Chatham, in one of the oldest houses in New Jersey: the Price-Baldwin House, named for its early owners, the Price and Baldwin families.

Early records show the house existed in 1770, and Davidson believes it was built even earlier. He has spent years researching its history, painstakingly documenting his findings in a detailed report he prepared for the Historical Society of the Township of Chatham. He’s confident the home, a center-hall colonial, was built in the mid-1700s. Construction methods and materials tell the story: structural beams made from hand-hewn chestnut or oak; flooring and finishing lumber installed with wrought-iron nails pounded by a master blacksmith; plaster walls reinforced with animal hair; and hand-finished clapboard siding.

Davidson bought the home with his first wife in 1984 from a family named Sanford. “When we bought it,” says Davidson, “the kitchen had been renovated, but not much else had been changed since 1830.” (Ann Sanford, with the help of her grandson, had inscribed the mantel above the large cooking fireplace.) From left: The entry hall is chock-full of antiques; the mantel of the enormous cooking fireplace was hand carved by the previous owners. Photos by John Bessler

Over the years, Davidson and Stanley carefully renovated the home while respecting its history. “The goal was not to destroy any historically significant features,” he says. Walls and ceilings were repaired rather than replaced, original floors were exposed, and existing windows were dismantled and made functional rather than replaced. Their only concession: installing modern storm windows to protect the original windows and make them more heat efficient.

The renovation led to some interesting discoveries, including walnut shells in the walls (“Someone had dragged them in and eaten them in there,” says Davidson), blue-and-red corncobs (“Some critter’s meal long ago,” says Stanley), horse or pig hair embedded in the plaster (for strength and hold, they conjecture) and newspapers dating back to the 1950s. 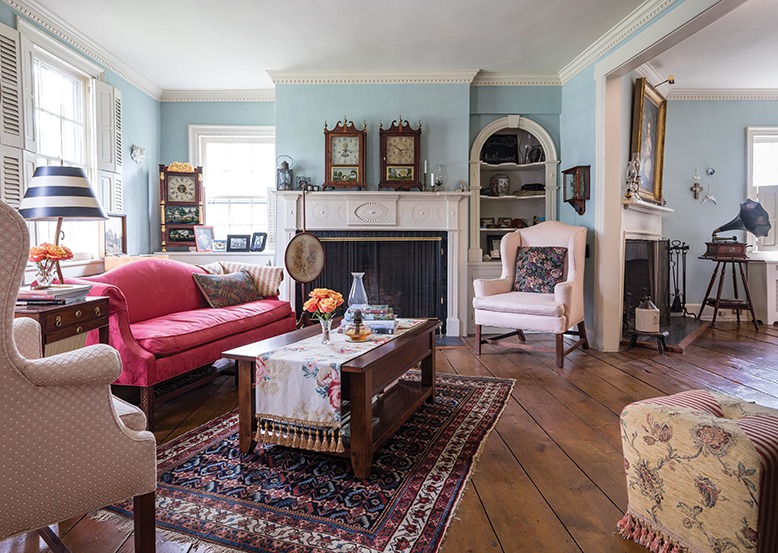 The living room’s fireplace—one of five in the house—shares a chimney with the fireplace in the adjacent sitting room. On the mantel are two of Davidson’s restored antique clocks. He built the alcove nook to the right to mimic period style. Photo by John Bessler

The couple began renovating the kitchen in 2018. The cramped space had little in the way of counter or cabinet space. The refrigerator was around the corner, in the mudroom. “We just wanted all the appliances in the same room,” laughs Davidson. But, adds Stanley, “we had to honor the historic component.”

The pair brought in Chatham-based kitchen designer Bob Gockeler, who, along with senior designer Maureen Madigan, spearheaded the project. “The single biggest challenge was to make it larger,” says Gockeler. To do so meant moving walls and doorways, which could conceivably open a Pandora’s box of issues. “We didn’t know what we’d find inside those walls,” says Gockeler.

Nevertheless, Gockeler and Madigan forged ahead.  “It was scary for us because we had to keep everything original,” Madigan says.

[RELATED: Inside the Historic Village of Mount Tabor]

The designers ultimately moved a doorway, opening the kitchen to the dining room on one wall and creating an alcove for the refrigerator on another. To facilitate the change, Davidson rebuilt an original cross-and-bible style door held together with 12 wooden pegs. First, he cut it down 6 inches to accommodate the new alcove.

New cabinets were chosen for their “nod to a historic color found in early-American furniture,” says Stanley. Existing flooring was sanded, refinished, and where necessary, patched with repurposed flooring. Original boards, trim, soffits and ventilation were repurposed when possible. The brick fireplace, originally used for cooking, remains. “We don’t cook in it,” says Davidson, “but we light a fire to warm the house.” The unique beehive oven, visible from outside, also remains intact. In one final concession to modernity, they installed new lighting to brighten up the dark space.

Apart from the kitchen, the home remains much as it was more than 200 years ago, including the five fireplaces and several built-in china cabinets. From left: Davidson and Stanley with their Model-T; the Scottie trailer used for camping trips, sits in their backyard when not in use. Photos by John Bessler

Vintage cars are a shared passion. Davidson and Stanley now have six antique cars, including a Model T (circa 1913), a 1917 Detroit Electric (yes, they did have electric cars back then), and the aforementioned Stanley Steamer, all fully functional. They mostly drive them to parades and car shows. “We use them. We don’t pickle them,” says Stanley. “These are everyone’s history.”

Another collectible: the 1969 Scottie trailer. Stanley calls it by its nickname, the Canned Ham. The couple takes camping trips with the trailer hitched to their (modern-day) car. It’s kept in their expansive backyard, awaiting the next adventure.